Miklós Radnóti: 'Letter To My Wife' - Poetry of Witness From the Grave 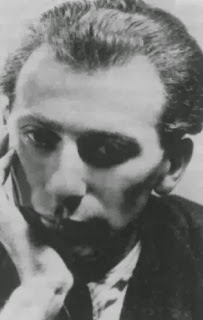 The poetry of Miklós Radnóti (1909-1944) is so beautiful, so pure and devastating, that it could take the breath from your lungs or break your heart. The poems and the story behind them are, in terms of "poetry of witness", the ultimate voice of the voiceless and murdered, crying from the ground.

He was a Hungarian Jewish poet who during his life struggled against the obstacles placed in his way due to his ethnic background. Radnóti worked as a translator and tutor, and wrote poetry which received little attention in his lifetime. His passion for his wife Fanni is evident from his poems. In 1943 he converted to Catholicism, but this of course made no difference to how he was viewed as a Jew.

Radnóti was made to serve hard labour in the 1940s, until he was eventually shot on a forced march, already in a weakened condition. After the war, his body and those of others were exhumed from a mass grave. In his overcoat, there was a small notebook which contained his final poems. They are now considered some of the finest Hungarian poetry, and world poetry, ever written. Only someone quite remarkable, both in talent and in spirit, could have written such poems in very extreme circumstances, knowing that he was probably facing death.

It is a good time to read Radnóti's poems, if "good" is the right word. In the past ten days or so, a photo appeared on the internet which showed his poems being burned by neo-fascist extremists in Hungary. A statue commemorating the place of his death was also driven into and destroyed. The latter incident may have been an accident, though the circumstances are unclear, but the book-burning certainly wasn't.

I think it's important for these incidents not to go unnoticed, and such happenings in Hungary and elsewhere are not receiving a great deal of media attention. You can read other articles at Melville House and at The Missing Slate. I first heard about this from Hungarian-born British poet and translator George Szirtes, whose excellent blog often draws attention to Hungarian issues.

Here, finally, is one of the poems, 'Letter to my wife' - one of those final poems and beloved by many. It is impossible to read this without being deeply moved. It is incredible on a purely aesthetic basis, as poetry, and it is a testimony which should be listened to.


LETTER TO MY WIFE (Miklós Radnóti, translated by Stephen Capus)

Posted by Clarissa Aykroyd at 23:52