Senegal and Poetry: 'Continent of the Spirit' 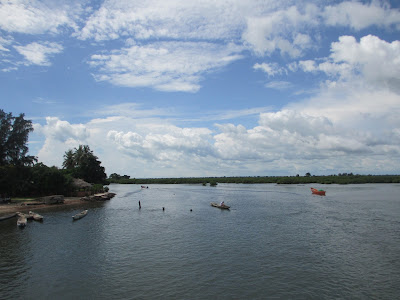 
I recently returned from two trips in one - Portugal and Senegal. This combination raised a few eyebrows, but it made perfect sense: Portugal was to visit friends and sightsee, and Senegal was for a friend's wedding. The flight from Lisbon to Dakar is only about three and a half hours, so when I found out my friend was getting married, it was hard not to start planning an epic trip.

I spent just over a week in each country, and I will write about both halves of the trip (over the course of at least two blog posts). Senegal has been a little more on my mind since I returned. It was my first time in both countries, but for someone who has travelled all over Western and Northern Europe, and to parts of Central and Eastern Europe, Portugal was always going to feel much more familiar. Technically I had been to Africa before, but Morocco and Egypt are part of the Arab world. This was my first time in sub-Saharan Africa.

Dakar was heat, humidity, white light and dust; the vast Atlantic; chaos of taxis; pockets of pleasant but oddly faceless Western comfort; horses and carts; beautiful colonial buildings with difficult histories; an outdoor bar in the middle of the night with very loud music, incredible rain and a raging electrical storm; friendly but relatively reserved people. It was a total immersion: everything about such a destination engages all the senses, and it's difficult to think about anything else while you're there, except the fact of being there. The wedding was French-Senegalese (or more accurately, French-Swedish-Australian-Senegalese), over three days, and trips involving weddings always have their own heightened intensity, although everything went beautifully. My friends' friends looked after us (me, the bride's family and other friends) extremely well and ferried the sweaty foreigners around with great kindness and patience. And while I didn't have a lot of time on the trip itself to explore the literature in-depth, I was left in no doubt that Senegal had a lot of poetry.

My poetic Senegalese journey started the moment I landed at Léopold Sédar Senghor airport - not that the airport was poetic (it really wasn't), but Senghor was a renowned poet as well as the first president of Senegal. Senghor was not only a member of the Académie française, who preside over matters relating to the French language and award prestigious literary prizes; he was also one of the founders of négritude, the cultural movement which promoted a unified concept of black identity around the world, as well as anti-colonialism. As well as Senghor, prominent proponents of négritude included the poet Aimé Césaire of Martinique, and the French Guyanese poet Léon Damas. You can read some of Senghor's poetry in translation here. The poems reflect both his international vision and his love of Senegal (the latter is especially powerful in 'Night in Sine'.)

During a couple of days outside of Dakar, we went to Joal-Fadiouth, a beautiful and unusual community where Joal on the mainland is linked to the village of Fadiouth on an island of clam shells. I was stunned by the shallow, radiant water around the island, where the inhabitants seemed at times to be walking on water. The walks on the bridges connecting the islands (there was also a "cemetery island"), with a huge sky and a breeze lifting off the water, were among my most wonderful moments in Senegal. Senghor was born at Joal, and I found this quotation over the entrance to a restaurant where we had lunch: 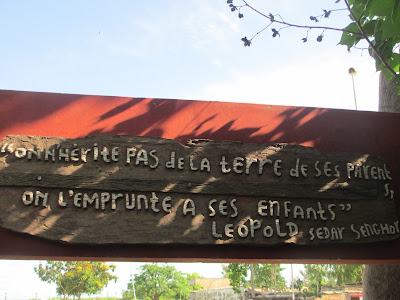 "We do not inherit the earth from our parents - we borrow it from our children."

A day or two before that, visiting the historic Ile de Gorée, we explored its history as a transportation point in the slave trade, and I came across this: 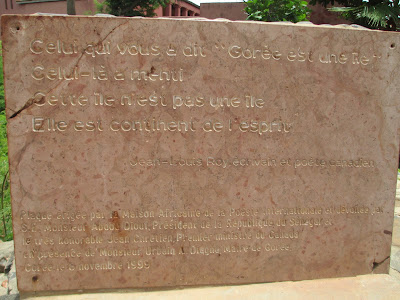 I was a bit surprised, to put it mildly, to find a poem on a historic Senegalese island written by a Canadian poet (and a memorial stone put in place by our former prime minister Jean Chrétien). It also made me curious about the Maison Africaine de la Poésie.

In the 'House of the Slaves' at Gorée I also found this poem: 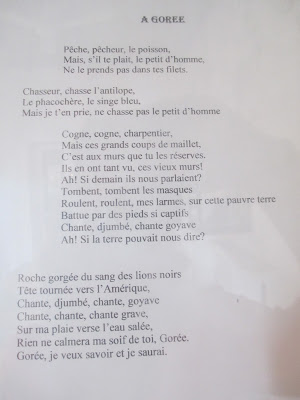 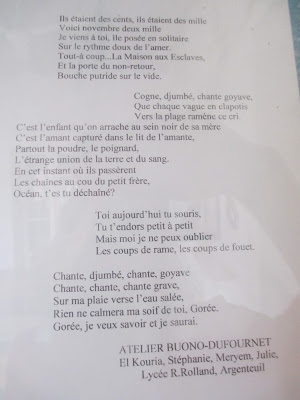 (I would have quite liked to translate this, but this post would have taken a lot longer to appear.) I always appreciate it when poetry appears as a form of memorial.

As it turns out, the new issue of Modern Poetry in Translation has just appeared. Entitled One Thousand Suns, it has a focus on African poets. At least one Senegalese poet, Mama Seck Mbacké, will feature. I can't wait to receive my copy...

Posted by Clarissa Aykroyd at 21:41