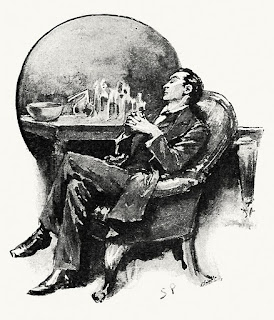 The above link will take you through to a very amusing video recording of former Children's Laureate Michael Rosen reciting 'Macavity'. From this page you can also access a text version. It is courtesy of the BBC, who included the poem as part of their 'Off By Heart' competition. If you have trouble accessing the BBC website, another link to the poem's text can be found here on the Guardian website.

T S Eliot, the author of 'Macavity' and so many other extraordinary poems, is a huge subject in himself and one that I'd like to return to another time. He is not an original choice for most revered poet, but I would probably have to give him the position in my literary life that I gave to W B Yeats ten or fifteen years ago. And not only was he the author of such groundbreaking, erudite and moving meditations on spiritual stagnation and growth, the nature of modern society and the passage of time as 'The Love Song of J Alfred Prufrock', The Waste Land and Four Quartets - but he also wrote fun and hilarious poems about cats, collected as Old Possum's Book of Practical Cats. The collection was later adapted into the musical Cats. Achieving that level of diversity is definitely living the dream, in poetic terms.

The Practical Cats poems were plainly written by a poet who knew and understood cats, as well as having a host of funny literary and historical references at his fingertips. In 'The Naming of Cats', he writes:


I tell you, a cat needs a name that's particular,
A name that's peculiar, and more dignified,
Else how can he keep up his tail perpendicular,
Or spread out his whiskers, or cherish his pride?


He then goes on to suggest names such as Coricopat and Bombalurina - as well, of course, as the cat's everyday name, and the "Effanineffable/Deep and inscrutable singular Name" that only it knows. A few poems feature dogs, usually Pekes meeting some terrible fate. The poem called 'Of the Awefull Battle of the Pekes and the Pollicles Together With Some Account of the Participation of the Pugs and the Poms, and the Intervention of the Great Rumpuscat" makes me laugh out loud. My mother tells me that when she and my father lived in England in the early 1970s, they had a landlady who had several cats ranging from the adorable to the psychotic. When my parents moved out of that house, they gave the landlady a parting gift of the Practical Cats poems. She was later overheard in her sitting room reading them aloud and with great delight to a friend.

'Macavity, the Mystery Cat' is a special poem for me because it reflects Eliot's admiration for Sherlock Holmes. He was enough of a fan that his play Murder in the Cathedral adapted a passage from the Sherlock Holmes story 'The Musgrave Ritual' to the extent that it was nearly plagiarism. Macavity, "the Napoleon of Crime", is also Professor Moriarty, Holmes's arch-enemy. There are references to at least two or three specific Sherlock Holmes stories in the poem, and the image of a cat mastermind of evil "doing complicated long division sums" while his henchmen do his awful bidding is quite wonderful. Cats are very good at being masterminds of evil, except that they spend too much time napping. I have friends who have a cat that would look perfect in a tiny Darth Vader outfit (complete with tiny ears and an extension for the tail), but that's another story.

As for Sherlock Holmes, he and Dr Watson and the host of characters brought to life by Arthur Conan Doyle in an unforgettable London are important to me for so many reasons. Holmes entered my life when I was young, reading the stories ('The Speckled Band' scared me to pieces) and watching the incomparable Jeremy Brett on TV. When I was a teenager and even more obsessed, I dreamed of visiting London and seeing the places in the stories. I did that in my late teens, and swore I'd move to London some day. Well, here I am.

It really is no exaggeration to say that if you trace the idea back to its source, Holmes is probably at least 50% of the reason why I ended up in London. I still love him for the sarcastic, cold, passionate character that he is, and Watson for his loyalty and bravery, but even if I'd lost all interest in the stories for themselves, I would love them forever just because they brought me to this city.
Posted by Clarissa Aykroyd at 20:07