"What Is Lost, What Remains": Lynda Hull's 'At Thirty' 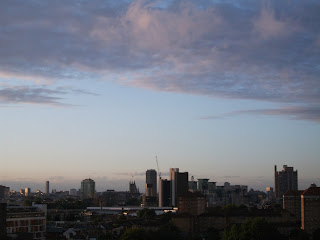 The above link will take you to Lynda Hull's 'At Thirty', as well as a biography and other poems, at Poets.org, an excellent resource for poems and poets. I'd also like to include this link on the Poetry Foundation website to her 'Rivers Into Seas', one of my favourites - written for a friend who had just died, and the last poem Hull completed only weeks before her own untimely death.

I started reading Lynda Hull only recently, when a colleague brought in one of her poems to be considered for inclusion in an anthology we are working on. I was impressed and decided to seek out some more of her work, and I've been browsing her Collected Poems ever since. Hull's poetry is genuinely gritty, not always one of my preferences in poetry or literature generally, I admit. She creates deeply personal scenes of translucent cities, flowing water, streets where it is always night, and the beauty of cracked plaster and prematurely aged faces. Music is a frequent theme of her poems, and her style is distinctly musical.

'At Thirty' is unusual for being far shorter than most of Hull's poems, which tend to run riverine for pages. I chose it for its resonance in my own life, given that I'm now just a couple of years past "at thirty". Hull's short life was far different from my own, though. She was born in Newark, New Jersey in 1954, and ran away from home at 16, having just been awarded a scholarship to Princeton University. During the next ten years she married a Chinese immigrant and lived in various locations around North America. She struggled with drug addiction, a theme which also recurs in her poems. In the 1980s, she began studying and writing poetry seriously, and married the poet David Wojahn. Tragically, she died in a car accident in 1994, aged only 39.

None of this bears much resemblance to my life. "Automats & damp streets", perhaps, and "alien skies"; I do live in London, and before that, Dublin. But there is much more to this poem than the specific difficulties of one woman's life; even more than the beauty and hardness of New York.

Personally, I have found that at thirty (and beyond) I have had time to gain some perspective on my life so far - I've always found that it takes several years to look back and have any type of realistic perspective on a certain time period in life. "Whole years I knew only nights", Hull writes; regardless of the details, any young night owl will recognise something in this, at least for a few years here and there. Her images of unfocused longing ("the heart's/racketing flywheel stuttering I want, I want") are also familiar. The twenties are not much easier than the teens; harder in some ways, because you're almost equally confused, but have many more responsibilities, and haven't had enough time to really understand why others behave the way they do and why you react the way you do.


...behind me facades gleam with pigeons

folding iridescent wings. Their voices echo
in my voice naming what is lost, what remains.


By thirty, almost everyone has experienced loss - sometimes a lot of it. You finally realise that losing people is something that will happen over and over again: by death, by misunderstanding, by circumstances that one or both of you can't reconcile. In the twenties, the dangers may have more to do with inexperience and impulsiveness; in the thirties the risk seems to be of hardening into resignation or anger. At thirty you begin to have a clearer picture of what has already happened to you and the kind of person that you have allowed yourself to become with your set of circumstances. The question is, what will you do with that knowledge?
Posted by Clarissa Aykroyd at 23:49