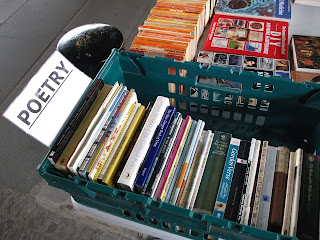 One of the biggest poetry festivals ever staged and part of the 2012 Cultural Olympiad, Poetry Parnassus kicked off today in London, with the star event of the evening being the Rain of Poems staged by Casagrande. I had to miss this due to another commitment, but it sounds as though it went off well and no doubt provided an incredible start to this festival.

I'll be going to several ticketed Poetry Parnassus events this week, and generally taking in the atmosphere and the poetry freebies at Southbank when I can, so I can't really complain. I'm looking forward to seeing and hearing some of the greatest poets of our time, along with lesser-known but brilliant writers, but I think what really thrills me about the whole event is its international scope, and the way it is bringing poetry into the public eye. Poetry seems to be pretty hot right now, relatively speaking, though that probably still makes it a brave candle flame.

I'll be writing some more about the events that I've attended at some point, but I've also been reflecting on poetry as a public art form and on its place in other parts of the world. For most of my poetry-reading life (which has now been actively for more than fifteen years) I've thought of it as a more private art form - not just because it tends to be quite "specialized" and "niche", but because it is a very personal and individual experience. The poems that I love, not unlike my other passions, are tied in to all sorts of events and memories in my life, past, present and future. Poetry strikes so deep into the subconscious and the inner person that it can be even more individual than other art forms.

At the same time, there are many parts of the world where poets are the figureheads and spokesmen or spokeswomen for artists, rebels, oppressed groups, and others. The English-speaking world has probably lost sight of this in many ways, but it's notable that a great many of the Poetry Parnassus events revolve around poets in exile, or from war-torn countries, or who are somehow disenfranchised or fighting non-violent battles. Even without specific response to conflict, there are many non-English-speaking countries where poetry has traditionally been the number one form of literature. When you look for poetry pages on Facebook, an enormous number are dedicated to Arabic poetry, and perhaps even more are dedicated to Urdu (Pakistani and Indian) poetry. In other words, those who call poetry a dead art form haven't got a clue; it's far from that in the Western world, but it is particularly alive in huge areas of the world such as the Middle East and Central Asia.

Beyond this, I'm just very interested in poetry as public art in the most literal sense: whether it's the Rain of Poems where tens of thousands of bookmark-poems fall from a helicopter onto the waiting crowds in cities around the world, or the Wall-to-Wall Poetry project in Sofia, or the poem by Carla Funk which I saw in the park in my hometown of Victoria, carrying on a great tradition of garden poems, or the extraordinary poem in the tunnel by Waterloo station in my adopted town of London. I've developed a radar for anything that might be called poetry in public places, and it's great if I have a chance to take a picture.

Some of the above rambling might provide matter for some further posts. But for now, I'm more than ready to enjoy Poetry Parnassus, and I'll be writing about it again in the pretty near future.
Posted by Clarissa Aykroyd at 22:52