I went to my first Poetry Parnassus event tonight at the Royal Festival Hall, which was 'Alternative Geographies', an evening of Middle Eastern poets reading their works in Arabic and French, with English translations. The poets included the following:

Some of the poems had been translated by Marilyn Hacker, who also read her translations in the course of the evening.

This was a pretty wonderful event. I was able to understand the poems in French (by Khoury-Ghata and Saïd), as French is my second language. For the Arabic poems, I had to rely entirely on the English translations, but Arabic is an incredibly resonant language and it was a pleasure just to listen even without comprehension, knowing that the excellent translations would help me to grasp the meaning and emotion.

These poets read with so much passion. I feel that many Western poets could learn something from their unabashed emotion and their dark/bright chiaroscuro of language. I was nearly moved to tears at some point during every poet's reading. One of the highlights was Amjad Nasser's poem 'The Phases of the Moon In London', where he finds the gulf between himself and one of his English neighbours hard to bridge:


I wanted to tell her that the skies of eastern cities, bent under military rule and corruption, are also blotted out, and that the stars that freckled our childhood with comets have also disappeared, but I feared to lose the only gift for which she envied me.


I was also deeply moved by Amina Saïd's incredibly beautiful, transcendent poems, delicately translated by Marilyn Hacker. And Moroccan poet Hassan El Ouazzani read with incredible verve and excitement. All of these poets ventured deep into difficult and dangerous territory, such as the ravaging of their countries by invasion and conflict, family relationships, and the quest for self-knowledge.

Here are a few pictures from the evening (lousy ones - I really need a new camera). First, Vénus Khoury-Ghata, who recently received the prestigious Prix Goncourt in France: 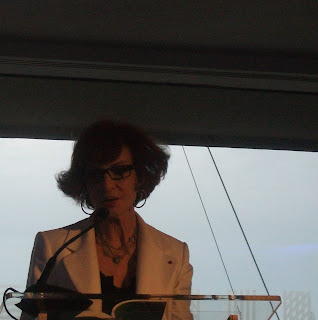 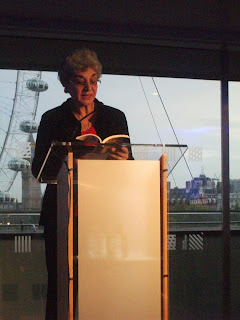 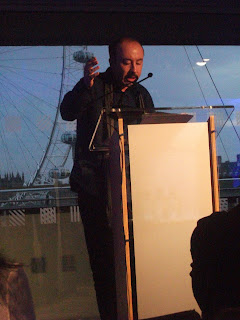 The audience was a pleasant mix of nationalities and knowledge of languages, but there was an air of excitement and pleasure throughout the evening from pretty much everyone.

This was an awesome start to my Poetry Parnassus experience. More to come!

(Incidentally, the Guardian has provided an excellent interactive poetry map with selections from all the Olympic countries and the poets attending Poetry Parnassus. This is extremely helpful if you want to get a taste of the amazing range of international work on hand this week.)
Posted by Clarissa Aykroyd at 23:39