Ilya Kaminsky's 'Author's Prayer': "The Darkest Days Must I Praise"

I saw/heard Ilya Kaminsky read at Poetry Parnassus and it was definitely one of the outstanding moments of the festival for me. Here is a picture from his reading (as usual, apologies for the unimpressive quality - I promise I'll get a new camera one of these days): 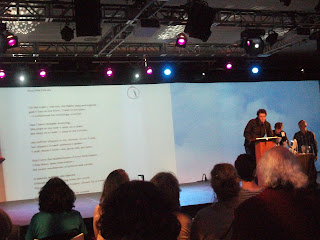 I had only just bought his collection Dancing In Odessa when I realised that he was taking the stage in the Clore Ballroom - the timing could not have been more perfect. He apologised for his strong Russian accent, then launched into his poems. I don't remember for certain which other ones he read, but one of them was definitely 'Envoi':


What ties me to this earth? In Massachusetts,
the birds force themselves into my lines -
the sea repeats itself, repeats, repeats.


His voice was as though a wave had crashed into the audience; my impression was that people first looked a bit shocked, then amused, then moved. "Passionate" doesn't entirely describe it. Kaminsky, just a couple of years older than I am, lost most of his hearing after an illness at the age of four, and I had a strange sense that this had partially trapped his voice in amber and preserved it in a way that might not otherwise have happened. He has written a long series of poems, Deaf Republic, in part about the experience of deafness.

Kaminsky is originally from Odessa, Ukraine, then part of the Soviet Union. His family came to the United States when he was a teenager and he started writing poetry in English when he hardly knew the language. His work was soon championed by an incredible array of poets - in the Acknowledgements to Dancing In Odessa, he gives thanks to the likes of Carolyn Forché, John Felstiner, Louise Glück and Robert Pinsky. Dancing In Odessa is an amazingly impressive and passionate collection, with a flow which suggests that it was written almost as a continuous sequence of poems. Kaminsky explores his family's history and identity, immigrant and refugee experience, and the voices of great Russian and Jewish poets. He sees Paul Celan as he might have been: "His face had an imprint of laughter on it, as if no other emotion ever touched his skin." In 'Elegy for Joseph Brodsky', he writes:

(from 'Elegy for Joseph Brodsky')


The poem I particularly wanted to write about was 'Author's Prayer', which stands on its own and has become famous:


This secular-spiritual prayer immediately made me think of 'poetry of witness', which Carolyn Forché has explored so intensively. The opening lines invoke Yeats:


If I speak for the dead, I must leave
this animal of my body


In 'Sailing to Byzantium', Yeats wrote of his heart being "fastened to a dying animal". Yeats, with his interest in mysticism, wrote in the Byzantium poems about immortality, the supremacy of art and made things outliving humans, so he may have meant this in a fairly literal manner. However, both Yeats and Kaminsky seem to be touching on a crucial and sensitive area in poetry and art; the negation of self, or at least the diminishing of its importance. Yeats, an incredibly personal poet who constantly drew on his own life experiences in the most explicit way, still created something far more universal than the details of one man's life. His ego and life history became subsumed into something greater and more lasting.

Kaminsky, who writes about speaking for the dead so that "the white flag of their surrender" will not be raised, also explores details of his own life and his family's; but again, this seems to be more about bearing witness than about personal testimony, although there is an element of that, as well. He lives "as a blind man/who runs through rooms without/touching the furniture", and speaks "in a language not mine". All of this entails sacrifice, with the idea that it will allow a breakthrough to something greater, for the author and for the readers, and for all who need witness borne to their experiences.

I met Kaminsky very briefly after his reading and he signed the book for me. There was something very friendly and very warm about his demeanour and I've also had that impression from interviews which I have subsequently read. He seems to appreciate the benefits he has gained from the very difficult experiences he has undergone in his life, especially at a young age. In a Maintenant series interview about a year ago, he said: "I don’t think there exists a poet on this planet without a duality. Duality is a mother of metaphors. And, if coming into a different reality by stepping on a different shore, propels a poet into more duality, a poet should only be grateful."
Posted by Clarissa Aykroyd at 23:06