Jim Newcombe's 'Crepuscular Canticle': "A Covenant With The Things Of This World" 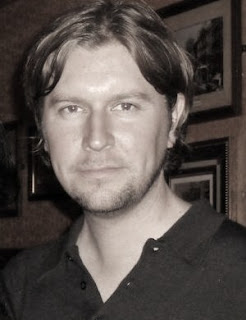 Today's entry and poem have been contributed by Jim Newcombe.

Jim and I worked together on transcripts for the Royal Courts about five years ago, and discovered a common love of poetry. We still see each other once in a while at poetry and art events or exchange messages about dire or sublime moments in our poetic lives.

Probably the most Byronic individual I know, Jim also manages to be somewhat Blakean, Wordsworthian and Hughesian. His Facebook updates make a day at work sound like The Canterbury Tales and a night on the town sound like Blake's Marriage of Heaven and Hell.

Jim is also a published poet and he has contributed this beautiful and rather Derek Mahonian poem, 'Crepuscular Canticle', along with his comments on the poem's genesis and thoughts on the state of modern poetry and art.


The following poem evokes an evening of having the house to myself, and hence it's a celebration of solitude, even privacy. Although the tone of the poem is contented, it nevertheless carries, perhaps only for its author, a tiny note of retrospective disquietude, in that it remembers a time when I lived with my daughter. Her mother and I separated when the little one was only a year old, so the fleeting evocation of her by her absence in this poem stings me a little now, four years after it was written, because it remembers a time that can never be recalled in life. I miss her clambering over me in the mornings, for instance, after she'd woken up and I'd rescued her from her cot in the adjacent room, crying out of fear or loneliness or imaginary monsters: things that can make grown-ups weep. But to say it can never be recalled in life is only to say what is true for all parents: we witness a swift evolution, all natural beauty being brief, each phase supplanting the former, and the older we get, the swifter our own evolutions seem to be. The physicists say time is relative, and tempus fugit becomes truer the older one gets. Still, the poem is written in the present tense, and I'm imposing subsequent autobiography where none exists in the text. All that aside, the poem needs no explanation.


I pour another drink and dim the lights,
once more salting your absence with solitude
as you drive from London on your way to Bath.

Into my tumbler of Havana rum
plonked icecubes snap and echo against glass
and bob like seals. Against the slatted window

the lamplight's yolky yellow glow fuses with
cobalt noon haze, the gentle sound outside
of splintery ringlets in the puddled rain;

"Be thou mindful to entertain strangers..."
The pale flicker of a pirouetting moth
tripping the light fantastic. Enter, Erato.

Taking the Gregorian Chant as my cantata
then Górecki's Third Symphony, these ghostly airs
invoke an ambience of sacred ritual.

This territory's limits are my freedom -
the double bed, the steep and creaking stair.
We who can count our blessings have so much.

The book in hand, the empty glass refilled
and the long, clockwork zeroes of the day
are smoke-rings dissolved in resinous air.

I lift a tiny outfit and inhale
the biscuit and warm dust of baby-smell
by the scent of which her absence is appeased.

Tonight I celebrate nothing more besides
a book, a drink, a lamp, the here and now -
a covenant with the things of this world.


As can be seen, the poem is written in unrhymed pentameters, the tone open, intimate. Whether reading or writing verse I have a general preference for metrical form; on the eye and on the ear it merges into a mathematical and musical nexus and writes itself more indelibly into the memory and the central nervous system. It connects us with something ancient, with the drum rhythms of our first tribal societies, the beating of the mother's heart in the womb, and as a consequence I'm unhappy about how much contemporary verse has lost this affinity with song and ceremonial structuring. If I peruse a book by an unknown author and my page-skim finds no metrical structure or craftsmanship I very quickly lose interest and put the book back on the shelf. Poetry is more than a string of images. Like Robert Frost, the first thing I do is look for the rhymes, though admitting this will make me no friends. Barely any contemporary magazine which publishes poetry prints anything that doesn't sound, to my fraught and biased ear, anecdotal, homogenous, slipshod, pedestrian. I haven't read a competition-winning poem in my lifetime that has meant anything to me. This is not to claim that I myself can produce the work I'd like to read. As Chaucer wrote, "The lyf so short, the crafte so long to lerne."

I dislike drafting poems on computers, not least for what they've done to my vision. I dislike being sedentary in general and will take standing over sitting, being outdoors over being indoors, motion over stillness. Admitting this as an obscure writer is like a sculptor saying he hates stone, except that really a poem is an oral thing to be committed to memory - what Yeats called "a mouthful of air" - and is as potentially inert as any script before actors enhance its drama, or as inert as a Haydn score before the musicians conjure magnificent music seemingly out of nowhere.

"Execution is the chariot of genius," said Blake, and works of genius hover above the age; they contain their age more than their age contains them. We have this 'democratic' notion nowadays, post-Dadaism, that we are all artists and that we can prove this with the absolute minimum effort of execution. Someone will scrawl with an agitated hand a five-minute doodle - not worth the cognomen of a tabloid cartoon (this is not to denigrate cartoonists) - and have the audacity to proclaim themselves an artist.

To claim that art which reflects modern life in its superficial and commercial aspects is meaningful and vital seems to me a diminishment of the potential of what was once the best synthesis for our humanity. To have made screen prints of tinned beans may have been to do something new, but that doesn't mean it was of indispensable value. Making a mass-produced product of a mass-produced product is merely a debasing irony and serves no enlightening cultural edifice. Admittedly, it may not claim to. Indeed, much of modern art with its ironic distancing makes barely any claims at all. "It doesn't mean anything," the self-styled artist will say, or "it means what you want it to mean" - statements which are risible evasions. Likewise, for anyone to state that representational art no longer is worthwhile because photography has rendered it pointless, or because the Old Masters excelled in it, is the sidestep of a swindler and a charlatan. A true painter who feels impelled to paint the fish on her plate is impelled to do so to record the subject with her feeling inward nature. Replicating a disintegrative worldview neither imbues the artist with a gift of vision nor enlightens anybody else; it merely retches a void stomach.

Nobody needs the vacuity of our age mirrored to them in post-modernist irony, unless as a satirical integration, which is better done by comedians. What we need, I believe, is someone possessed of an uplifting and transforming vision. Compare the works of art commissioned by the Medici to those authorized by Saatchi to see how far we have fallen. The name of Saatchi is a corrosive on modern culture; theirs is a deeply cynical enterprise, as fraudulent as any promulgated by today's bankers, as equally spiritless and philistine. There are also the followers of Francis Bacon (not the great Elizabethan, but the twentieth-century painter whose vision of humanity was a sudden spasm of tormented flesh) who submit that accidents have value, who find virtue in error. I can think of no great master of whom this could be said. Nothing was left to chance; the mastery and control was itself attained through aemulatio. The coarser brushstrokes of Titian and Rembrandt don't betray a lack of finish; they are a deliberate counter to the technical culmination of Michelangelo, Raphael and Correggio. Man may believe he has killed God, but the work of great artists is a homage to the original act of creation. Today's iconoclasts - though they would not admit it - suffer from the Oedipus complex, the past masters being giants of unkillable paternity. Why should a public pay heed to an art that displays not even the merit and discipline of craftsmanship? When someone picks up a guitar, it's not unreasonable to expect they can play chords. All this finds a parallel in contemporary poetry.

Anyhow, I shall stop this diatribe before I start to sound reactionary. Suffice it to say, in poetic terms I go along with Coleridge when he said that the strength of the genie comes from his having been confined in a bottle. I realize the danger of sounding my resistance while displaying here a quiet and unassuming offering of my own, since some will interpret a note of afflatus in what accompanies it, as though my own efforts are a reckoning of some sort. If I fail to reach "the roll, the rise, the carol, the creation" - as inevitably I do - then interpret my stance more as a baptist in the wilderness anticipating one who is to come.


Jim Newcombe lived in the heart of the Midlands before migrating to London in 2006, where he can be found on ragged evenings wandering Soho, believing a poet requires liquid purification to compensate for the unyielding tensions of an unstable muse. He works for a legal firm for his beer and bread, the formality of the profession veiling the shambolic life of a writer. He has had work published in Staple, Poetry Nottingham, Tears in the Fence, The Bohemian Aesthetic, Shot Glass Journal, The Poetry Box, Mobius and The Recusant.

Posted by Clarissa Aykroyd at 11:48