Wallace Stevens's 'A Rabbit as King of the Ghosts': When Rabbits Freak You Out 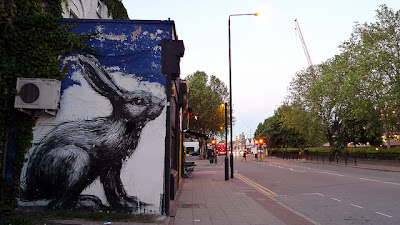 Anyone who doubts that rabbits can be scary need only watch Donnie Darko or read parts of Watership Down. Then there's Michael Sowa's painting Happy Easter. And also, this poem:


A RABBIT AS KING OF THE GHOSTS (Wallace Stevens)


My faithful blog readers may not be entirely surprised to hear of my ongoing astonishment that there is no epigraph from 'A Rabbit as King of the Ghosts' in Richard Adams's Watership Down. It seems so perfect a fit, in so many ways, that I can't understand how Richard Adams overlooked it. I can only assume that he couldn't fit it in, or that he was not aware of the poem when he wrote his famous novel.

The two Watership Down characters which this poem immediately reminds me of are the sinister Black Rabbit of Inlé, who is a sort of grim reaper in the rabbit cosmos, and also the megalomaniac General Woundwort. (In one passage, Bigwig dreams about Woundwort: "And over all, as big as a horse in a field, aware of all that passed from one end of the world to the other, brooded the gigantic figure of General Woundwort.") This comparison may be a bit simplistic, though. The rabbit in the poem is not necessarily a scary rabbit, or at least not an evil rabbit. It is Rabbit: primal and animal.

The poem has an edge of surreal humour which is not unfamiliar from reading Stevens's other poems. Why does the rabbit see itself growing bigger and bigger, "humped higher and higher, black as stone"? Why the vision of the cat slipping away like an insect - "the little green cat is a bug in the grass"? The imagery of red and green seem to me to suggest a prism, the breaking of light into component colours. This could be a reference to the differences between animal sight and human sight; also, perhaps, the shifting mood of the rabbit picking up on the subtle natural shifts around it.

Mainly the impression I carry away from this poem is that of another dimension which wild animals inhabit. This is a human viewer trying to describe a state of mind which humans do not experience. Anyone who has been fortunate enough to observe wild animals will know that through their trancelike, indifferent gaze they inhabit a world very different from our own. Perhaps, in a rabbit's mind and through its senses, there are moments when it feels itself becoming "a self that fills the four corners of night". Once again, Wallace Stevens is playing with shifts in perception.

On this link, you can find a video of actor Bill Murray reading another Stevens poem, 'The Planet on the Table', and 'A Rabbit as King of the Ghosts': http://www.openculture.com/2012/08/bill_murray_reads_wallace_stevens_poems.html

Posted by Clarissa Aykroyd at 23:46

Email ThisBlogThis!Share to TwitterShare to FacebookShare to Pinterest
Labels: Wallace Stevens, Watership Down