'The Marvel' by Keith Douglas: Ways of Seeing 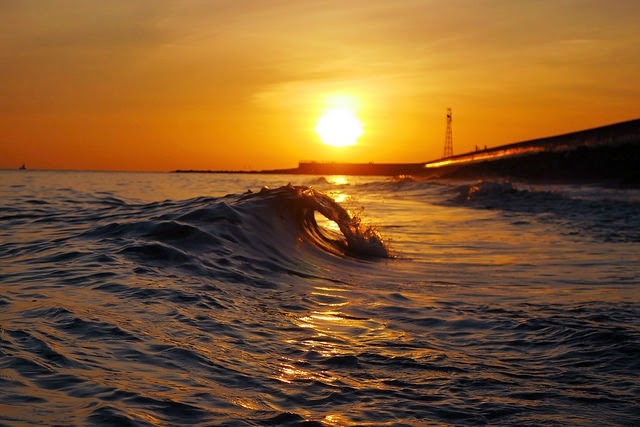 
A baron of the sea, the great tropic
swordfish, spreadeagled on the thirsty deck
where sailors killed him, in the bright Pacific

yielded to the sharp enquiring blade
the eye which guided him and found his prey
in the dim country where he was a lord;

reflecting the unusual sun's heat.
With it a sailor writes on the hot wood
the name of a harlot in his last port.

For it is one most curious device
of many, kept by the interesting waves -
and I suppose the querulous soft voice

of mariners who rotted into ghosts
digested by the gluttonous tides
could recount many. Let them be your hosts

and take you where their forgotten ships lie
with fishes going over the tall masts -
all this emerges from the burning eye.

And to engrave that word the sun goes through
with the power of the sea,
writing her name and a marvel too.


In 1991, Seamus Heaney gave a lecture on Keith Douglas at Poets House in New York. Not only that, but you can listen to a full recording of the lecture here. I am only slightly exaggerating when I say that I nearly fell over when I discovered this recording - one of my most beloved poets speaking about one of my other most beloved (and much less famous) poets...

Early in the lecture, Heaney reads 'The Marvel' and calls it a poem "which seems to arrive from nowhere". After reading it he says "It has a certain Noli me tangere stride to it... It just walks in." I love that, and what a compliment! He also comments on the tension in the poem between the intellectual and the visceral, between aristocracy and brutality, which is very Douglas. The whole lecture is wonderful and if you appreciate Heaney, or Douglas, or especially both, you must listen to it.

My own take on this poem is that it's another riff on Douglas's obsession with seeing. I suppose that ways of seeing are the currency of poets. A poet is always looking for an alternative angle. But the array of angles and perspectives in 'The Marvel' is dizzying. In the space of a few lines, Douglas sees (most literally) through the eye of the great fish hunting its prey; through the written word and the implications of the sailor using the eye as a magnifying glass to write the "harlot's" name on the deck; through the eye of the sun itself and the power of the natural world; through the gaze of the drowned at "fishes going over the tall masts"... There is something hallucinatory but also very concrete about it.

This may be a strange comparison but when I re-read the poem this time I was suddenly reminded of Las Meninas, the painting by the great Diego Velázquez. The subjects of the poem and the painting may have nothing in common, but they are both masterpieces about physical and spiritual angles on vision, and the relationships between the viewer and the viewed.

Posted by Clarissa Aykroyd at 21:31