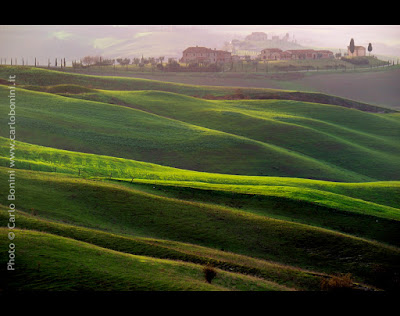 Everyone with an interest in American poetry, or just poetry, seems to know the beautiful poem 'A Blessing' by James Wright. 'Lying in a Hammock at William Duffy's Farm in Pine Island, Minnesota' is another which I often see discussed, largely due to its mysterious conclusion. But a particular favourite of mine, though slightly less well known, is 'The Journey'.

The poem opens expansively, the Tuscan town of Anghiari "suddenly sweeping out" and stranding the speaker and his companion in the hills. The sudden revelation that "everything was now graying gold/With dust" is a little disquieting, or at least odd - normally we think of wind and heights blowing the dust away.

Everything shifts in the third stanza to the extreme focus on the spiderweb. And there's a continuing strangeness here, because the speaker describes the spider almost as though she is a beautiful woman - "the golden hair/Of daylight along her shoulders". (It is noteworthy that the speaker mentioned "we" earlier in the poem, possibly a spouse or lover, but after the turning point of the spiderweb, the poem rests on a very intimate first-person viewpoint.)

This poem is about life being surrounded by death. The spider, so alive - "poised" and "Free of the dust" - hangs at "the heart of the light", but surrounded by "cemeteries" of dust, and the debris of her own prey. It turns out that earlier in the poem, the dust - which remains ever-present for the rest of the poem - is a clue, because this is all about mortality and living with it. The speaker accepts the wind blowing the dust all over his body, and the ruins which surround him, and us. A bit like Wright's 'Lying in a Hammock...' poem, this ends on an ambiguous, perhaps faintly bitter note, calling into question the earlier sense of acceptance.