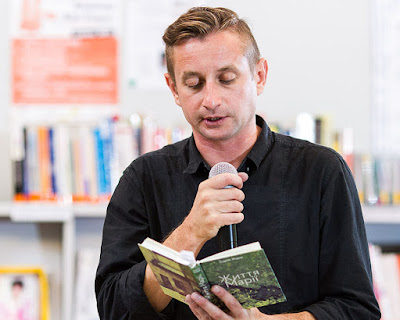 Back in November I went to an event at the British Library where Ukrainian poet Serhiy Zhadan was interviewed and read some of his poems. I actually went to several interesting poetry events between about September and December - a talk by the great Syrian poet Adonis, also at the British Library; a live reading with actors of Emily Wilson's new translation of The Odyssey, at Southbank; a couple of events remembering Ted Hughes and his ties to Modern Poetry In Translation and the poetry translation world in general; and others. But I was also in the midst of a very stressful time at work (not out of the woods for a while yet, I'm afraid) and so didn't write about these at the time.

What reminded me of Serhiy Zhadan this week was that I was reading Timothy Snyder's new book The Road to Unfreedom, which is largely about the incalculable effect that Russia has had on world events during the 2010s, and Zhadan is mentioned in this book. The incident he was involved in took place in 2014 during the Maidan protests around the country and the Ukrainian revolution, and can be read about here: https://www.poetryfoundation.org/harriet/2014/03/ukraines-best-known-poet-injured-in-protests

The other thing that reminded me was reading this remarkable interview with Zhadan which has just appeared: https://www.calvertjournal.com/articles/show/11022/everything-changed-ukraines-literary-star-serhiy-zhadan-on-5-years-since-euromaidan

In this interview he talks about how the war in Donbass has changed the country, how he feels about Russia and Russian literature, and so on. It's a good summation of his perceptive, strong but compassionate views. I thought his comments on whether writers should be seen as moral authorities were especially interesting: certainly a contrast to a lot of the claims I see on social media and elsewhere.

When I saw Zhadan at the British Library in November, I think I was one of the few people in the audience who wasn't a Ukrainian or Russian speaker (though I did recognise a few words). There was, of course, a translator. I took a few notes. Zhadan spoke about the importance of poetry in a country like Ukraine and how thousands might come to a poetry reading (I thought to myself: eat your heart out, poets in English-speaking countries, at least most of the time...). In Ukraine, he said, poetry is part of politics, civic life, and history. However, he also said that at times, writers speak about things they don't know enough about! "Writing about war goes deeper than politics," he said. "The war is setting the tone in Ukrainian literature, and war changes the intonation of literature." Zhadan is something of a rock star in Ukraine, and not just for his poetry: he's been involved in theatre and music and is currently a member of the ska band Zhadan and the Dogs.

I've been reading Zhadan's poetry, at least occasionally, for a few years, and it's always a delight for me to come to his poems. You can read his poems 'Stones' and 'A city where she ended up hiding', translated by Valzhyna Mort, here: https://pionline.wordpress.com/2016/12/17/two-poems-by-serhiy-zhadan-translated-by-valzhyna-mort/

And this poem, 'History of Culture at the Turn of This Century', is a favourite of mine: https://www.poetryinternational.org/pi/poem/5646/auto/0/0/Serhiy-Zhadan/History-of-Culture-at-the-Turn-of-This-Century/en/tile