"Her Fevered Smile By Night": Louise Imogen Guiney's 'The Lights of London' 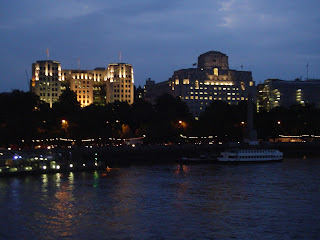 
The evenfall, so slow on hills, hath shot
Far down into the valley’s cold extreme,
Untimely midnight; spire and roof and stream
Like fleeing specters, shudder and are not.
The Hampstead hollies, from their sylvan plot
Yet cloudless, lean to watch as in a dream,
From chaos climb with many a sudden gleam,
London, one moment fallen and forgot.


Her booths begin to flare; and gases bright
Prick door and window; all her streets obscure
Sparkle and swarm with nothing true nor sure,
Full as a marsh of mist and winking light;
Heaven thickens over, Heaven that cannot cure
Her tear by day, her fevered smile by night.

I have a view from my current flat in south London that I never thought I'd have in this city. It looks out into a small park, which is a blessing just for the glimpse of trees and greenery; but beyond are almost all the major landmarks of the London skyline. Battersea Power Station is proudly front and centre; Big Ben and Westminster distant but clear, a small curve of the London Eye, the elegant, futuristic towers of the City. A friend pointed out one day that if you know where to look, you can even see the dome of the National Gallery, and Nelson's column.

I often prefer London by night. Especially if I have had a chance to watch a magnificent sunset first, which is surprisingly often the case. The City is like a huge space station, complete with bright red twinkles on the highest points, and the near-complete spikey Shard, even rising well above the lovable Gherkin. Big Ben's moon face is pale and watchful, and I can never quite believe that's what I'm looking at from my window.

Those London bridge walks, too; those delight me by day, but thrill me by night. I love emerging from Embankment station and seeing what colours are washing over the National Theatre that night. Off in the distance, the Oxo Tower and the magnificent spotlit St Paul's. The best view is from Waterloo Bridge. It gives those striking views both down to the City and to Westminster, and allows a view of the beautiful Hungerford Bridge, too.

Louise Imogen Guiney's sonnet 'The Lights of London' was unfamiliar to me, as was the poet - a turn-of-the-century American woman who also lived in England and was known for both poetry and criticism, now mostly lost to time. This poem struck me with its London truth. When I read it I can so vividly see nineteenth-century London and the gradual starring of its nights with the lighting of the gaslamps. A few years ago I went to see U2 at Wembley, and when they played 'Moment of Surrender' as the magnificent finale, all the lights were turned out and we all held up our lit mobile phones. Although it was so simple, it was one of the most beautiful moments of a show mostly filled with a very impressive light show. I imagine London in this poem "turning on" at night in much the same way.

This poet understood London skies, I think...those hazy, ever-changing, heartbreaking skies. And "Heaven thickens over, Heaven that cannot cure/Her tear by day, her fevered smile by night" - yes, that is London, to the very core.

Posted by Clarissa Aykroyd at 23:06