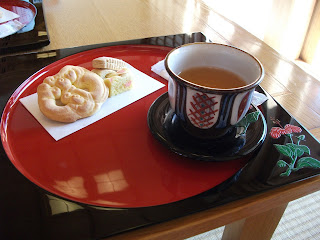 
The above link will take you through to Michael Longley's 'Snow Water' on the Poetry Archive website, as well as several of his other poems and biographical information.

Tea, the subject of 'Snow Water', feels like a subject as vast as time. Its devotees know that it is not just a hot drink; it is an art, and for some, a quasi-religion. Sydney Smith, a clergyman of the 18th and 19th centuries, was quoted as saying "Thank God for tea! What would the world do without tea? How did it exist? I am glad I was not born before tea." I first came across this quotation at the British Library, on a lovely map of the world showing how tea was harvested and enjoyed on every continent (well, most of them). It was actually an odd sort of propaganda poster for wartime. Darkly, it noted regarding the Sahara Desert: "Sahara Desert. No water for tea."

I'm a sort of devo-tea (ahem): I love tea and have sampled many varieties, and friends and colleagues have commented on my enthusiasm. On the other hand, I do not much care about the exact temperature of the water or exactly how long the teabag should stay in or anything like that. (In fact, I now have a rather low habit of making it in the mug.) I would mainly like it to be hot and to taste tea-like. I admit, though, that it can be particularly fabulous if made with extreme correctness and served in just the proper way (bone china...cucumber sandwiches...). Also, when I first lived in England, I really did not understand the concept of Jaffa Cakes. I was ready to file them away along with mushy peas as an impenetrable English mystery. Until I tried eating one with a simultaneous sip of tea. Bliss!

The above picture was taken a year ago in Okinawa, Japan, in a beautiful palace tea-room, overlooking an extraordinary little Japanese garden with miniature palm trees. The biscuits were perhaps of even greater importance in Okinawa, since apparently they have been essential to Okinawan culture for centuries (an empire founded upon biscuits?). But Japan might be the ultimate nation of tea-lovers, though China and India would no doubt argue with that. I particularly love flavoured black teas, and Japanese tea-makers do those beautifully. There really is a tradition that snow water makes the finest tea, which I think is Chinese. And there actually is a blend called Eyebrows of Longevity.

Coffee is better on the Continent, of course; but in this part of the world, if you want great tea, stick with England. The English can still get terribly, terribly excited about a good cuppa, and I seem to be pretty English in that respect myself. (I blame my ancestry, and, surprisingly, my Finnish mother, who drinks vast quantities. She apparently picked up the habit while living in England.)

I just came back from a holiday in Spain with a friend, and we drank copious amounts of beautiful coffee. But to furnish our rented apartment and to avoid mediocre Lipton, we brought a good-sized box of Yorkshire Tea, and consumed nearly all of it in the space of two weeks. I think that says it all.