Al Purdy, Tom Thomson, the Group of Seven, and Canada: "A Country That No Man Can Comprehend" 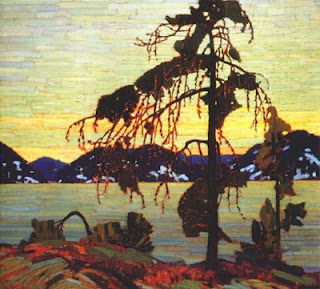 Preface and Last Poem, HER GATES BOTH EAST AND WEST (Al Purdy)


The above link will take you through to a page on the website of Harbour Publishing, Al Purdy's publishers. It contains the preface to his Collected Poems and a 'last poem', 'Her Gates Both East And West'.

The painting is The Jack Pine by Tom Thomson, a great Canadian painter. It was completed in 1917, not long before Thomson's death. He died under mysterious circumstances in Algonquin Park, Ontario - his canoe was found floating empty and his body discovered over a week later. Thomson was the principal inspiration for the Group of Seven, who are remembered alongside his name and art. Along with Thomson, these seven - Franklin Carmichael, Lawren Harris, A Y Jackson, Franz Johnston, Arthur Lismer, J E H Macdonald, and Frederick Varley - left an extraordinary legacy to Canadian art. They celebrated the country's grandiose, cutting mountainscapes, its astonishing colours and contrasts, and its vastness. While they were principally based in Ontario, they also travelled and found inspiration from British Columbia to Nova Scotia, and even in the Arctic.

At the end of 2011, the Dulwich Picture Gallery in London hosted a wonderful exhibition of Tom Thomson and the Group of Seven. Of course, every Canadian art lover in town headed down to see it, including myself; but it was great to see so many Londoners curious about what Canadian art had to offer. I suspect a lot were thinking "not much". It was amazing to see so many of these great paintings together, though I was struck by homesickness and also had the inevitable "The rest of the world doesn't know what they're missing, eh?" conversation with another ex-pat. The exhibition was very well reviewed by the media and was a success. But the comment I was happiest to hear was overheard from a surprised-sounding art lover in the Lawren Harris room. Surrounded by monolithic, glowing, semi-deified icebergs and lakes, she said: "I've never seen anything like this before." Coming from hard-to-impress Londoners, that kind of comment is quite something.

I think that Tom Thomson and the Group of Seven go well with Al Purdy's poems. In so many respects, Purdy is the great voice of modern Canadian poetry. His poems are funny, irreverent and a bit rude; they celebrate Canada's vastness and beauty and tell us not to worry about that silly quest for national identity we're so hung up on. This is Canada - massive, diverse, harsh, lovely, self-celebrating but self-deprecating.

I heard Al Purdy read twice and met him once, probably in the space of about a year - maybe two years before he died in 2000. He came to read and chat with my modern Canadian poetry class. He was very tall and had a foghorn voice and an enormous personality. I was obviously being a bolshie 18 (19?)-year-old intellectual that day because I asked him how he could explain placing D H Lawrence's poetry ahead of Yeats's - he cited both of them as massive influences but loved Lawrence the most. (At the time, I was a total Yeats devotee.) He boomed "I'd have a hell of a time explaining it!" and then, as I recall, fixed his piercing eyes on me and recited a bit of Lawrence. There wasn't much I could say in response to that. Some months later, I went to one of Purdy's readings at the university. I remember he had an auditorium-full of students and others howling with laughter as he read some of his best-loved poems:

(from 'At the Quinte Hotel')


Purdy is funny on the page, but hearing him read was unforgettable. It's such a loss that he is no longer around to read his own poems, as they're not quite the same coming from anyone else.

Purdy lived and travelled all over Canada, though his later years were spent in Sidney, BC, just outside of my hometown of Victoria. Much of his inspiration seems to have come from Ontario, and from the Arctic, but it appears that he touched down almost everywhere. He hears the same voice everywhere, something which holds the country together:


Listen:
you can hear soft wind blowing
among tall fir trees on Vancouver Island
it is the same wind we knew
whispering along Côte des Neiges
on the island of Montreal
when we were lovers and had no money

(from 'A Handful of Earth')


I love the range and sweep of 'Her Gates Both East and West'. Purdy calls Canada "a country that no man can comprehend", and I think I know what he means. It's too big, it's too empty, its people are diverse but distinctly Canadian; it boggles the mind as much as it seduces. People in Europe sometimes ask why I've only been to Toronto a couple of times, given that it's the country's major city. I explain that I grew up almost a five-hour plane flight away. Then they understand a little more, but unless they have been to Canada (or at least North America) they don't really understand. From the UK, five hours would take you beyond Turkey. Flying that far and still being in the same country is hard to understand if you come from a small nation. I still can't help laughing when I overhear comments like "France and Germany are SO BIG!". Er, really?

I've travelled in Canada; fairly large parts of British Columbia, quite a lot of Alberta, bits of Ontario and Quebec. Is that really all? A lot of it was a very long time ago, too. It still takes in a lot of sights and memories. I think of the west coast of Vancouver Island, endless sand and ocean at Long Beach, world's end. The Rocky Mountains, lakes a blue you can't believe, postcard scenes beyond anything the human mind could imagine. The top of the CN Tower at night in November - COLD. Seeing the house where my father grew up in Westmount, Montreal. Flying home from Europe for a visit, watching hours and hours of rock and ice and snow unfolding beneath me and marvelling at it. The ferry between the mainland and Vancouver Island - the islands, the calm, the beautiful horizons. Road trips where you fall asleep and wake up hours later and the landscape has hardly changed, because it's just so big, and so far.

Unsurprisingly, I probably didn't really appreciate Canada until I left. People tell me how fortunate I was to grow up there, how beautiful it is, and wonder how I could have left. I tell them there was a big wide world waiting out there, and I love London, and I love Europe. But Canada was a special place to grow up. It is unusual to grow up in a city and still feel so close to nature, and in Canada you can easily do that, especially somewhere like Victoria or Vancouver. I miss the familiar mountains, their shapes and names, their changeable yet constant nature, colours shifting from day to day, sometimes disappearing behind cloudcover. I miss the sea and I miss knowing that not far away are lakes and forests. I miss knowing that I could be in a car for hours and there would be just an endless pour of dark green trees past my window and it would hardly change for hours. When I was younger, I found that a bit boring. I now know how wrong I was. Constant and exciting and magnificent, Canada is - not boring.

Posted by Clarissa Aykroyd at 00:32