Copyright: is there any point in trying? 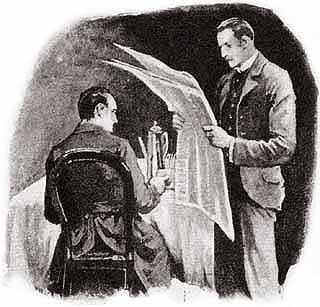 Holmes glanced up at my gasp. "What is it, Watson?" he asked sharply.

"Holmes," I cried, "it is a copyright violation. How horrible!"


Well, maybe not. And yet, and yet...copyright can be such a fraught, complex and even emotive area that Holmes himself might have felt inclined to turn his ginormous brain to its perusal.

I suppose that my decision to be hyper-conscientious about this blog has sort of become the "hook" for the whole thing - although I am not too sure anyone besides myself has actually noticed. Essentially, I'm not that worried about becoming the target of a massive lawsuit if I post a poem in its entirety without permission; it's more to do with some moral feelings surrounding the issue, combined with sympathy for the poets. I've posted one of my own poems (so far) in its entirety on this site and I don't particularly want people just taking it for their own use and without properly crediting it (if anyone wanted to do that, which is dubious.) I am treating this blog a little bit more like a magazine, I guess. It cuts down on spontaneity as I end up planning the entries somewhat more than I otherwise might, but that's sort of how my mind works anyway; things tick over in the background for a while and then emerge relatively formed. Spontaneity was never my strong suit.

Asking for permission has been interesting so far. Of course, I have posted some out of copyright poems - easy. As I think I mentioned at the outset, though, the majority of my current favourite poets actually do fall into that area where they've died but won't be out of copyright for another 5 to 50 years. That's what you get for preferring the greats of modern poetry. I've often been able to link to the poem I want on a site where permissions have cleared; Poetry Foundation, Poets.org and Poetry Archive have been particularly amazing resources for this. But sometimes poets have virtually no online presence of this sort. Or the poem I wanted can't be found online at all, or only without permissions having been cleared.

I've had an interesting variety of responses. One or two publishers have turned me down but have been very nice about it. A few publishers and agents have happily granted me permission but wanted to be sure that I had the most up-to-date version of the poem (in the case of Derek Mahon, this was noteworthy as he tends to revise his poems a lot) and that I knew it was a once-off, and that I credited the poem properly. This is all very correct, and I think that they took the pragmatic view that at least I was asking and perhaps it was a little free publicity for that author's Collected Poems or some such. One poet gave me permission directly, and so did an executor of an estate; both of these were very kind and also gave me some very interesting comments which I incorporated into the entry. Then there was Faber and the T S Eliot incident.

I had written to Faber asking whether I could reproduce Eliot's 'Marina', a favourite poem which also reminds me of home. I honestly didn't hold out a lot of hope, as Eliot is...well, Eliot...and I thought Faber was likely to keep a fairly tight grip on things generally. The automatic email I received in reply told me to expect at least a couple of months' wait, which is perfectly reasonable for a busy permissions department.

A few weeks ago I posted an entry about The Waste Land, in which I quoted some lines. Coincidentally (I think), Faber permissions got back to me a few days later. Politely, they told me that they were not able to grant permission to reproduce Eliot's poems electronically. However, they also told me that they had noticed my entry on The Waste Land and that I should take down all the quotations that I had used. This amounted to about 20 lines of a 400-lines-plus poem.

I was nonplussed and thought maybe they'd misunderstood and hadn't looked at the entry, and thought I had simply reproduced the whole thing or a huge portion thereof. I wrote back slightly acerbically commenting that I wasn't aware of any prohibition against quoting. The response (which sounded slightly apologetic) was that this was the publisher's decision and they had to ask me to remove the quotes. I didn't write back again.

From a little bit of subsequent online research I learned that the Eliot estate is pretty draconian. And no, they don't want you even quoting Eliot - anywhere - without permission. Not even a few lines at 5 or 10% of the poem. As you can see, I haven't taken the lines down. I think that if Faber pursues this it will really indicate that they don't have much else to do (which I doubt), and furthermore I don't feel that they are in the right legally - there are actual laws governing this sort of thing, though I admit it can be a somewhat gray area. It's completely right and acceptable for a publisher or estate to insist that they maintain control over the reproduction of entire poems or very large portions, but this hardly fell into that category. I had also provided a link to the Poetry Archive, where the poem actually is reproduced in its entirety, by permission.

I just couldn't help feeling that it was more than a little ungracious of them to respond to my query about another poem by not only saying that they didn't want me to reproduce 'Marina' - perfectly reasonable - but that I had to take down every tiny Eliot quote I'd ever used. I am a blogger and I am certainly not doing this for profit - and I was trying to do things the right way by the legal standards. While I do feel (a bit) for the publishing Emmas who get stuck with trying to enforce these decisions made by other people, I don't think that it was a particularly appropriate occasion to slap someone on the wrist. As I've said, I don't feel they are in the legal right to insist on this, and I had also directed people to a source where permissions were cleared. (The response I'd had from Faber said something about my quotations being accessible to the whole world and their dog - ok, maybe not those exact words - but failed to address the fact that I'd directed readers to a permissions-cleared online source which was also accessible to the whole world and their dog.) A large part of the intention of copyright protection is to not deprive the artist or the estate of their rightful income. What I'd done did not fall under that heading. In fact, the whole point was to direct people to the entire work, encouraging them to do so by my own enthusiasm for the poem, and by quoting a few of its irresistible lines. It is also a fact that there are numerous online sites where Eliot's poems are reproduced in their entirety without permissions clearance, and in many cases Faber does not appear to have insisted on their removal.

I suppose this is the moment to admit that I'm not sure where I am going with all this. I was a bit annoyed, but it's no big deal. I'm not planning to change my overall approach; quoting within reason and the usual norms of "fair use", linking to legal sources, sometimes approaching a publisher, agent, executor or poet and seeing how I get on. I feel better about this approach than I would about any other, and I think that it has worked reasonably well so far. I completely understand how difficult an area this can be - which is why I've taken the trouble of going down this road. I guess I'm also hoping that those who control the copyright will be reasonable in return. I don't expect everyone to grant me permission, at all. However, expecting them to be reasonable is something else again.

Posted by Clarissa Aykroyd at 23:00