ReJoyce! James Is Out of Copyright 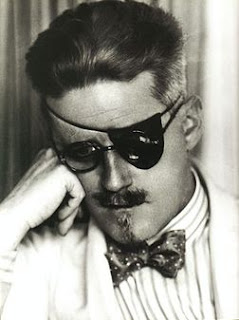 The spell of arms and voices: the white arms of roads, their promise of close embraces and the black arms of tall ships that stand against the moon, their tale of distant nations. They are held out to say: We are alone - come. And the voices say with them: We are your kinsmen. And the air is thick with their company as they call to me, their kinsman, making ready to go, shaking the wings of their exultant and terrible youth.

April 26. Mother is putting my new secondhand clothes in order. She prays now, she says, that I may learn in my own life and away from home and friends what the heart is and what it feels. Amen. So be it. Welcome, O life, I go to encounter for the millionth time the reality of experience and to forge in the smithy of my soul the uncreated conscience of my race.

April 27. Old father, old artificer, stand me now and ever in good stead.


James Joyce's work has now been in the public domain for two weeks, as it is 70 years since his death. According to this blog post from the New Yorker, this is one in the eye for Stephen Joyce, the author's grandson, who tried to keep a stranglehold on Joyce's estate and frankly sounds like a terrifying and insecure control freak of the type I have occasionally encountered. *cough cough*

The blog post mentions Stephen Joyce's interference in the 2004 Bloomsday celebrations. I'm pretty sure that 2004 was the year I saw more of Bloomsday than any other, and it seems everyone managed to have fun anyway. I remember O'Connell Street thronging with Dubliners, and some sort of strange and fascinating performance art by the Spike - there was a replacement Nelson's Column with a living Nelson on top, and Stephen Dedalus (or Joyce himself?) hanging precariously from a crane. Or something to that effect. It was a rather dreamlike example of the unfailing Irish habit of lateral thinking (ie. thinking outside the box 24/7). I kind of miss that.

Anyway, I thought that I would celebrate by posting a short excerpt from Portrait of the Artist as a Young Man. It would have to be my favourite Joyce book. I read Ulysses just before I moved to Dublin, which was interesting, but a bit of a mistake - simply because I would have recognised a lot more had I waited to read it after I'd lived in Dublin for a year or two. I'd like to return to it, but even having read it before (now about ten years ago), it's a little daunting. I studied Portrait in university and it was something of a revelation. More abstract than Dubliners, it kept two feet on the ground to a certain extent and offered a fascinating and accessible insight into human consciousness. That is a book I would like to reread, more than the others. I've never read Finnegan's Wake. I mean, have you?

Joyce apparently wrote poetry too. A quick glance suggested to me that it wasn't up to much. But if I'm to stick rigidly to the format of this blog (which wasn't really the idea), you could argue that the above is prose poetry. It is certainly unforgettable. "Old father, old artificer, stand me now and ever in good stead..."
Posted by Clarissa Aykroyd at 23:59