The Dark Poetry of Spain 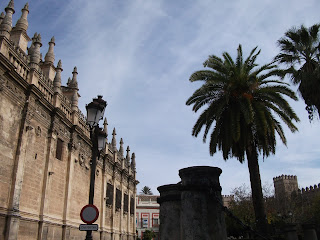 In December, I spent two weeks in Andalucia, Spain with a friend. In terms of sheer well-rounded pleasure it was among the best holidays I've had. Years of living on chilly northern islands have definitely convinced me that there are advantages to chasing the winter sun. Here, it wasn't exactly hot (except for some particularly pleasant hours in the sun), but it was mild to warm and there were blue skies for at least part and often all of every day.

We stayed in Jerez de la Frontera, a little over an hour by train from Seville. It proved to be a perfect base - a lovely, friendly town well placed for day trips elsewhere; not too big and not too small; and home to the Royal Andalusian School of Equestrian Art, where I spent several happy hours both at a show and on a training day, watching exquisite dancing horses and handsome caballeros. It really does not get much better. Elsewhere, we wandered Seville's ornate shopping streets; sat by the vast blue reaches of water on Cadiz's shores; had one of the best meals I've ever had on holiday, a stunningly artistic selection of tapas, in Puerto de Santa Maria; admired the vistas from Arcos de la Frontera, a medieval dream of a town; and drank a lot of delicious coffee.

I hadn't previously spent a lot of time in Spain, although I speak the language up to a point (I was pleased at how much I was able to use it on holiday, and how well I was generally able to get by) and have had some excellent friendships with Spanish people. I had already spent a week in Mallorca, but although there are flashes of Spanish culture, it is pretty touristy and you don't always know where you are. In 2010 I spent a few days in Madrid and a day trip to Toledo, and loved both. Madrid's Prado is hands down one of the finest art galleries I have ever visited, and I finally caught a tantalizing glimpse of the mystery of Velazquez's Las Meninas. Madrid is monumental but beguiling, dark but fun-loving - definitely a city I could revisit any time. And Toledo, a gemlike town, is truly the stuff of fantasy.

It may have been mere holiday-fuelled musings, but I concluded that Spain was probably where I'd chose to live if I had to go somewhere in southern Europe. I love the south of France but it is somehow a bit too Mediterranean for my taste. Italy is enchanting and rich and beautiful but I don't feel at all at home there or with the people. Spain has something in common with both but perhaps there is a little more darkness and solemnity, which has a certain appeal. Ted Hughes wrote of Sylvia Plath's reaction to the country:


Spain frightened you. Spain
Where I felt at home. The blood-raw light,
The oiled anchovy faces, the African
Black edges to everything, frightened you.
Your schooling had somehow neglected Spain.
The wrought-iron grille, death and the Arab drum.

(from 'You Hated Spain', Birthday Letters)


I know that my experience of Spain is still fairly limited, but this seems pretty accurate: especially "Black edges to everything." The Spanish friend who took me to Madrid refused to go to the Prado with me; with a shudder, she said "Oh, I hate Spanish art...it's so dark." It's hard to argue with her "dark" assessment.

I knew that Spain had a rich literature, most of it not very familiar to me. But I was really delighted to find that they love and honour their poets. In Seville especially, and in other towns too, I came across many plaques dedicated specifically to poets. This one is dedicated to José María Blanco White - "a life dedicated to fighting intolerance." He moved to England and wrote a sonnet, 'Night and Death' (in English), which was dedicated to Samuel Taylor Coleridge and has achieved some fame. 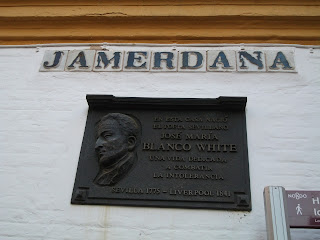 I certainly realised that I don't know very much about Spanish poetry. I bought a book of Antonio Machado's poems, which seems beautiful, but reading poetry in Spanish is bound to be a slow project for me.

Federico García Lorca is one of the greats, and an Andalucian as well. From dipping into his poems a little, they immediately seem profoundly Spanish with their imagery of death, horses, idealised women, winding roads through dry landscapes, and music - this is a deeply and passionately musical nation. This poem, 'Romance Sonambulo', chilled me to the bone with its morbid imagery and references to the Civil War - a tragic event which ultimately caused his death, as with so many others. You can find it on this link both in English translation and in the original Spanish:

I'm glad that Spain loves its poets. Another good reason to return and try to uncover a little more of the mystery.

Posted by Clarissa Aykroyd at 14:22