'The Rime of the Ancient Mariner': Coleridge Goes To Antarctica and Gets Back In Time to Ruin One Out of Three Wedding Guests' Day 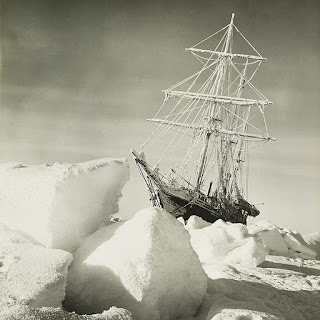 From THE RIME OF THE ANCIENT MARINER (Samuel Taylor Coleridge)


And now the storm-blast came, and he
Was tyrannous and strong;
He struck with his o'ertaking wings,
And chased us south along.

With sloping masts and dipping prow,
As who pursued with yell and blow
Still treads the shadow of his foe,
And forward bends his head,
The ship drove fast, loud roared the blast,
And southward aye we fled.

Listen, stranger! Mist and snow,
And it grew wondrous cold:
And ice mast-high came floating by,
As green as emerald.

And through the drifts the snowy clifts
Did send a dismal sheen:
Nor shapes of men nor beasts we ken--
The ice was all between.

The ice was here, the ice was there,
The ice was all around:
It cracked and growled, and roared and howled,
Like noises in a swound!


'The Rime of the Ancient Mariner' is possibly Samuel Taylor Coleridge's most famous work, although personally I probably still prefer 'Frost at Midnight' and especially 'Kubla Khan'. This is only a very brief excerpt from the very long original poem, which appeared in Coleridge's Lyrical Ballads. It has variously been interpreted as a parable about the sanctity of nature and all living things, a Christian allegory, or simply a great story which warns the reader not to randomly kill an albatross or stop for an Ancient Mariner while en route to a wedding.

'The Rime of the Ancient Mariner' may also have taken some inspiration from some of the earliest Antarctic exploration of the eighteenth century, including the voyages of Captain James Cook through the Pacific Ocean into the Antarctic Circle. Coleridge obviously never went near the Antarctic, but "ice mast-high...As green as emerald" is pretty spot-on. The picture which I have posted above is of Ernest Shackleton's ship Endurance, which was trapped in the Antarctic pack ice in 1915 - leading to the failure of the expedition, but even greater acts of heroism and the safe return of all of Shackleton's men. It could be an illustration for this passage from the 'Ancient Mariner'.

I have Antarctic dreams and have had them for several years now. Not dreams while I'm asleep, usually - but sometimes it feels like a vast white expanse, translucent ice castles and heroic beard-encrusted men wandering amongst penguins are all a constant part of my mental landscape. It has actually been well over ten years since I first read Sara Wheeler's Terra Incognita and that was when my long walk into the ice fields of this southern desert - for Antarctica is considered a desert - began. I picked up the book a bit sceptically, intrigued because it was shelved under "travel" and at the time I was reading any and all travel books. I did think there was a pretty good chance that it would be boring. How much can you say about ice?

I was completely captivated by Wheeler's account of her trips to Antarctica, the eccentric characters she met at McMurdo Sound, her South Pole journey, her time at Scott's hut. She writes with humour and charisma but also offers moving descriptions of the peace and serenity she found there: a "certainty" which she calls "something that put everything else - everything that wasn't Antarctica - in true perspective." She continues: "I felt as if I was realigning my vision of the world through the long lens of a telescope. It emanated from a sense of harmony." I have not yet been to Antarctica, but I have had very short sojourns in the Moroccan Sahara and the Western Desert in Australia - as well as a part of the Okanagan in British Columbia which I believe is considered a desert ecosystem. The sense of peace is almost overwhelming. I remember that as an experiment, during my overnight with a friend in the Sahara, in a Berber camp, I made the experiment of trying to worry. Usually this is something that I find all too easy. Here, I was unable to do it. I felt as though the top of my head had opened up and the worries were floating away into the darkness. I imagine that Antarctica would be similar - but on the flip side.

I chase this particular fascination in various ways. Antarctica also fits in well with my hero complex, although I will probably never stop debating whether Scott was a hero or a selfish fool, or both. But who can forget the words of Oates, one of his companions who met the same death: "I am just going outside and may be some time"? Currently I'm reading The Worst Journey in the World, by Apsley Cherry-Garrard, also one of Scott's men. Shackleton trumps Scott, with his extraordinary voyage in the James Caird from Elephant Island to South Georgia, and the saving of all his men (many of whom then went off to die in the war.) I recently saw a wonderful performance by LAMDA Drama School students of Terra Nova, about Scott's expedition and his relationships with his wife and with Amundsen - very moving. I have been revelling in the BBC's new series Frozen Planet, with some of the most incredible footage ever seen of penguins soaring in a graceful but slightly ridiculous manner through the air to belly-flop on the ice; killer whales and their frightening phalanx manoeuvres to create a wave that will wash a poor seal to its eventual death; the incredible, perspective-defying walls of ice. Frozen Planet is also about the Arctic, which has a more wonderful variety of animal life, including wolves, my favourites. But Antarctica is - Antarctica. There is no other place like it on earth: hostile, overwhelming, blindingly beautiful.

Whether or not I ever go there - and I hope that some day I will - I know that for me Antarctica is above all a kind of spiritual landscape. My friends have grown used to me posting "I'm moving to Antarctica" on my Facebook status updates. In a sense, that's not usually a good thing. It means I want to run away, that life is overwhelming, that people in particular are exhausting and selfish and I'd prefer the company of penguins, scary whales, and ice. But at the very least it comforts me to know that it is there; another place, perhaps even more beautiful than the Sahara, where I would find myself completely unable to worry.

Posted by Clarissa Aykroyd at 20:27