Sea Breezes in the City: Claude McKay's 'Subway Wind' and the Poetry of the Ocean 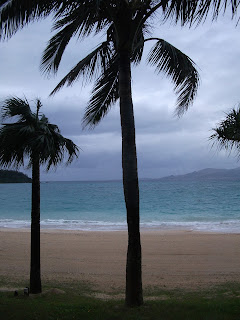 
The above link will take you through to the poem 'Subway Wind' by Claude McKay, on the Poetry Foundation website.

When you grow up near the sea, how can you not continue to dream of it forever? Admittedly, the sea of my childhood and my dreams is not the one depicted in the poem, or the one in the picture above, which was taken on a trip to Okinawa, Japan a year ago. In the Pacific Northwest, the sea is about ten degrees year-round (I think - at any rate, it is extremely cold. I've been swimming in the Strait of Juan de Fuca, so I speak from personal experience). It booms and echoes and sometimes crashes over the sea-wall during the occasional "marine bomb" windstorms. On the days which strike the perfect balance of wind and fine weather, windsurfers skim the waves like birds with fluorescent wings. Sometimes the sunlight glancing off the water is so bright that they are almost lost in it.

Most importantly: if you grow up on the southernmost tip of Vancouver Island, the sea is everywhere. I used to orient myself by it in the city; away from the sea, toward the sea. It was certainly more meaningful than north and south. My parents' house is a five-minute walk from the seafront. My favourite cafe, by Ogden Point, was so close to the water it was practically on it, and there was a dive shop on the ground floor. Some days you can smell the salt. There were so many mornings when I woke up to the sound of the foghorn; melancholy, but also pleasant and reassuring, at least if you didn't have to go much anywhere.

Then you move away, and the sea isn't everywhere any more. I lived in Dublin for three years and given that it is a port city, I did not take enough advantage of the proximity of the sea. I had to make an effort to go out to Sandymount or Howth, or down the coast to Brittas Bay, and it didn't happen nearly often enough. It was accessible, but not "everywhere" to the same extent as it was on Vancouver Island. In London, the sea is too far away for everyday. Much too far away. The closest I usually get is occasionally standing on Westminster Bridge, watching an influx of gulls, hearing their bitter cries and perhaps a sharp sudden sea-smell. All that will really give the landlocked sea-lover is a sudden pang.

Claude McKay, a Jamaican poet who spent much of his life in the United States battling racism, wrote beautifully of these longings in 'Subway Wind'. He describes "captive wind that moans for fields and seas"; a wind that, like everyone in the subway, is trying to get to somewhere that it loves better than the dark and haunted underground. Sometimes, on the London Underground, you can see it in people's faces. They have the still face and the far-off stare, and you know that they are somewhere else. Perhaps by the sea.

I've also been reading Derek Walcott, the great poet of St Lucia, and though his work is resonant with the complexities of history and colonialism, it is particularly resonant with the sea. It is literally present in so many of his poems, and where the poems step away from the shore and are landlocked, it still intrudes as metaphor:


I watch the huge trees tossing at the edge of the lawn
like a heaving sea without crests, [...]
all this before the rain scarily pours from the burst,
sodden canvas of the sky like a hopeless sail,
gusting in sheets and hazing the hills completely
as if the whole valley were a hull outriding the gale
and the woods were not trees but waves of a running sea.


You would hardly know that the poem was about a valley, and not about the sea. But the sea is so vast and inclusive and overpowering that if it was a part of your childhood, it will echo through your psyche forever.

Posted by Clarissa Aykroyd at 11:40