Derek Walcott's 'A Far Cry From Africa': "How Can I Turn From Africa and Live?" 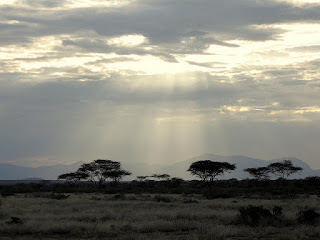 Photo of Kenya by Ai@ce . Used under Creative Commons license


Half my friends are dead.
I will make you new ones, said earth.
No, give me them back, as they were, instead
with faults and all, I cried.


I am in awe of Derek Walcott. I cannot think of another living poet who unites the personal and the epic so magnificently, and among the recently dead, perhaps only Czesław Miłosz. I have only started coming to grips with Walcott's work fairly recently and I am so excited that I still have so much to discover from his poetry. I attended the 2011 T S Eliot Prize readings where Walcott was nominated for White Egrets, and the only thing to regret about the evening was that he was not there in person to read. Although I hedged my bets and picked an alternative as well, I thought he was the most likely winner and I turned out to be right.

This link goes to 'A Far Cry From Africa' on the Poets.org website:


This much-studied poem draws on historical fact and on Walcott's own emotional ties to his roots. He is a Caribbean poet, from St Lucia, but his racial origins are mixed, from both Africa and Europe. The poem refers to the Mau Mau conflict in Kenya, and its imagery and language are, overall, controversial and charged. Walcott faces up to acts of violence committed by both Europeans and Africans, and the justifications and rationalisations of both sides. Through the human and animal violence, the beauty of Africa breaks through:


Threshed out by beaters, the long rushes break
In a white dust of ibises whose cries
Have wheeled since civilization's dawn
From the parched river or beast-teeming plain.


The final cry, "How can I turn from Africa and live?", enshrines the agony of those who feel torn by their backgrounds. Walcott's deep love for the Caribbean shines through in so many of his poems, as well, which adds another strand to the complexity. One of my friends in London who is mixed race - her mother is from Barbados, and her father is English (at least partly of German/Jewish origin) - has mentioned to me how irritating she finds it that Barack Obama is generally referred to as black, when he is actually mixed race. She says that this just adds to the confusion experienced by people of mixed heritage, and although not able to understand through personal experience, I can see what she means.

I recently re-read The Zanzibar Chest by Aidan Hartley, one of the most extraordinary travel/memoir books I have ever read. Toward the end of the book, the final lines of 'A Far Cry From Africa' are quoted. Hartley is of English parentage but he grew up in East Africa and has continued to make his home there. The book describes his experiences working for Reuters, covering the carnage in Rwanda and Somalia, among other places, so much of it is harrowing in the extreme. It also details the breakneck, unbalanced and adrenalized lifestyle of "stringers" such as Hartley and his colleagues. He spent years recovering from the lifestyle and from the terrible things he had witnessed and experienced. I have had the slightly unnerving feeling while reading The Zanzibar Chest that I was trying to live an extremely different life, vicariously. The book also weaves in accounts of his father's life and that of his father's friend Peter Davey, particularly in Yemen.

Africa is still something of a mystery to me. It hasn't usually been top of my travel list, but it is climbing. I have a number of friends and acquaintances from various African countries, mostly including the French-speaking African countries of Côte d'Ivoire, Cameroon, Congo, and others. So far, although I have set foot on the African continent, it has only been to Morocco and Egypt, which are part of the Arab world and thus in a different universe from sub-Saharan Africa.

I admit that I am fairly Euro-centric. I have mostly travelled in the West, and all my ancestry is northern European, pretty much. Even when visiting Morocco and Egypt, I had the sense that I stood on the edge of something vast - the rest of the world - which of course I knew about, but which was still largely unknown to me. I think that this is why it is so valuable to step out of one's comfort zone, and I hope to do that more in future. Although you may read about them and watch the news, countries very different from the place of your own upbringing are another world entirely until you go to see for yourself. I was recently speaking with an African friend about what it was like in le pays. Her words were "C'est l'ambiance totale." I thought that this was such a wonderful expression, though I am not certain how to translate it - "total atmosphere"? She essentially said that people there are closer to the essentials of life - they have to struggle more for work, and food, and water - and that they leap into every experience whole-heartedly and passionately as a result. I think that in the West we are cut off from much of this kind of life experience, and our complications lie much in the areas of materialism and poor mental health.

Derek Walcott takes us into the experience of those with a more varied perspective than my own, and this is so valuable. He writes in "the English tongue I love", but his work ranges across several continents. This is poetry that does everything poetry should, and even more, I think.
Posted by Clarissa Aykroyd at 00:12