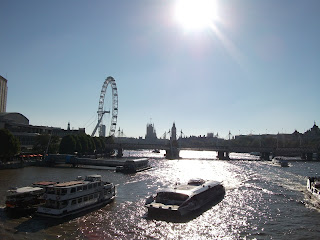 Poetry Parnassus is coming to London this summer, for a glorious week starting on 26 June, mostly at the Southbank Centre. It's all part of the Cultural Olympiad surrounding the 2012 Summer Olympics in London. I feel a bit like "forget the sports - bring on the culture." I'm a Canadian, so the Winter Olympics are more my cup of tea, and sport is frankly pretty disillusioning these days; will an entire weightlifting team or two get disqualified for steroid use? (As well as my disinterest in nationalism, which seems to be what it's mainly about, there is the fact that Canadians never quite recovered from the disgrace of Ben Johnson being stripped of his gold medal for 100 metres at the Seoul Olympics. I was eight or nine years old and like everyone else there, will never forget it...)

But an entire week of international poetry celebrations - now that is exciting. I've bought a few tickets for events and may buy more, and there are a lot of free events, too. Wole Soyinka and Seamus Heaney appearing at the same event; a Poetry Factory and Edible Poetry; Ted Hughes translated into French, Greek and Turkish; a Word From Africa event to finish off the festival with African poetry, music and performance; and that's only a few of the events. It is set to be the largest poetry festival ever staged in the UK, and I presume one of the largest ever in the world. I think that the presence of so many international poets, whose first language is not English, will be particularly important in proving that poetry is an incredibly living and powerful art form.

Poets from most of the Olympic countries will be represented at Poetry Parnassus, due to an unprecedented manifesto to bring poetic representatives from as many countries as possible. I was delighted to learn that Katharine Kilalea will be representing South Africa. She is a young poet (my age or a little younger, I think) who has lived in the UK for several years. I heard her read a few years ago at a Penned in the Margins event at Aubin & Wills in Notting Hill and she kindly signed her collection, One Eye'd Leigh, for me. I remember her as one of the most mesmerising poetry readers that I have heard. It's not quite accurate to say that she read, because if I remember correctly, she recited all of her poems by heart.

One of Kilalea's poems, 'Hennecker's Ditch', can be found on this link from a Carcanet Press blog (her publishers):


There is also an interesting commentary on the poem, which I remember as 'Dear Circus'. I won't attempt to add my own, as my analysis hat is not currently on (this is where I miss being a literature student). I do remember that it struck me as being very Waste Land, and when I asked her about this afterwards she confirmed the impression. I will never forget Kilalea's recital of the poem. She looked no more than 22, had her leg in a cast and kept her eyes fixed on her audience while leaning a little crazily on a crutch. It was pretty hypnotic. The poem itself is wonderful and evocative.

Posted by Clarissa Aykroyd at 18:50