Titanic and Thomas Hardy's 'The Convergence of the Twain' 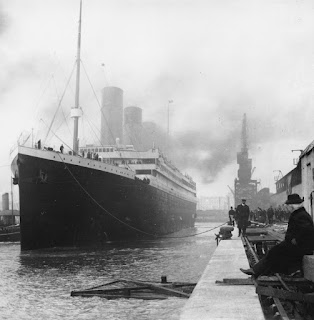 THE CONVERGENCE OF THE TWAIN (Thomas Hardy)

(Lines on the loss of the "Titanic")


In a solitude of the sea
Deep from human vanity,
And the Pride of Life that planned her, stilly couches she.


Over the mirrors meant
To glass the opulent
The sea-worm crawls — grotesque, slimed, dumb, indifferent.


Jewels in joy designed
To ravish the sensuous mind
Lie lightless, all their sparkles bleared and black and blind.


Dim moon-eyed fishes near
Gaze at the gilded gear
And query: "What does this vaingloriousness down here?" ...

VI
Well: while was fashioning

This creature of cleaving wing,
The Immanent Will that stirs and urges everything


Prepared a sinister mate
For her — so gaily great —
A Shape of Ice, for the time far and dissociate.

VIII
And as the smart ship grew

In stature, grace, and hue,
In shadowy silent distance grew the Iceberg too.


Alien they seemed to be;
No mortal eye could see
The intimate welding of their later history,


Or sign that they were bent
By paths coincident
On being anon twin halves of one august event,


Till the Spinner of the Years
Said "Now!" And each one hears,
And consummation comes, and jars two hemispheres.


The Titanic sank on the night of 14-15 April 1912, one hundred years ago. The rush has already started this weekend, it appears, so I thought I would make my stunningly unoriginal blog post on the subject now.

It seems that Titanic will never die, although she has been gone for a century and she took more than 1500 lives with her. I suppose it was such a dramatic and instructive event that it was fated to become one of the bywords of a century which was soon to hold tragedies considerably more massive in scale. Fallen beauty and power; man against nature; human loss; hubris...all of these hold our attention.

I will admit straight out that I loved the film with Leonardo diCaprio and Kate Winslet. Yes, there was an unlikely romance and some pretty cheesy dialogue, but the ship's magnificence and the terror of its sinking were so convincingly portrayed that I couldn't help being moved. It did give a glimpse of the individual stories as well as the magnitude of the overall disaster.

'The Convergence of the Twain', published a few years after the disaster, was one of the poems that brought me into the presence of Thomas Hardy as a great poet. The whole poem has a surreal, grotesque, almost gleeful quality which is very unnerving, particularly the idea that the iceberg was formed as the ship's "sinister mate". Hardy questioned the idea of a traditional God, but as can be seen from this poem, he certainly believed in some kind of "Immanent Will", whatever its exact nature. 'The Convergence of the Twain' suggests a belief in a divine force within nature - but not a particularly benign one.

Posted by Clarissa Aykroyd at 20:50