Rudyard Kipling's 'The Way Through the Woods': Is There a Road? 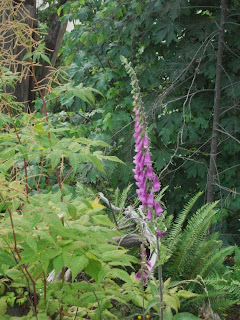 THE WAY THROUGH THE WOODS (Rudyard Kipling)

Yet, if you enter the woods
Of a summer evening late,
When the night-air cools on the trout-ringed pools
Where the otter whistles his mate,
(They fear not men in the woods,
Because they see so few.)
You will hear the beat of a horse's feet,
And the swish of a skirt in the dew,
Steadily cantering through
The misty solitudes,
As though they perfectly knew
The old lost road through the woods ...
But there is no road through the woods.


I took the above picture on a visit home to Canada (not this year's visit, but the year before.) Not quite the English woods that Kipling was no doubt describing, but it seemed right for the poem, anyway.

I reminded myself of this poem when I was writing my last entry on Conan Doyle and mentioned Kipling. As I mentioned, I'm not a big fan of Kipling, but there is something that I really love and that touches me intensely, about this poem. I suppose that it could bear a variety of interpretations, but I really don't see it as a poem about ghosts. I do believe that places can carry imprints of past events, but mainly (for me) this is a poem about memory. In 'The Way Through the Woods' it could be either ancestral memory, or distant childhood memory - "They shut the road through the woods/Seventy years ago." It reminds me that Kipling was one of those writers (and simply one of those human beings) whose life spanned particularly changeable times; his dates are 1865-1936.

The poem also made me think of certain childhood memories, particularly visiting my grandmother in Finland, until she died when I was fifteen. I know very well that she is gone and that huge changes have taken place in the house and the woods and the roads where I used to walk. I've even seen some of them. But I also know that there are memories which are as vivid as present reality and that nothing can ever change those. "There is no road through the woods" - but there is, still.
Posted by Clarissa Aykroyd at 23:35