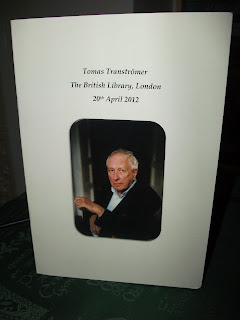 A few months ago, I went with a friend who was in town for a few days to the Tomas Tranströmer event at the British Library. This wasn't just a simple poetry reading or discussion of Tranströmer's poetry; the poet himself was there. After suffering a stroke over twenty years ago, he has severely impaired speech and mobility and thus cannot read his own work. But being in the same small room with the 2011 Nobel Prize winner, celebrating his poetry - that was very special. There was discussion of his work, readings in Swedish and English, some of his favourite classical music, and a few poems set to music. The tickets were inexpensive, as they tend to be for such cultural events in London, and it was a pretty unique experience.

One of the poems that was read in both Swedish and English was 'C Major'.


Krister Henriksson, who has played Wallander in the TV series based on Henning Mankell's books, was reading the poems in Swedish. As he read this particular work, the tone of his voice sort of...turned upward with an inflection that I vaguely recognise, perhaps as I'm half Scandinavian (although my Scandinavian parent is Finnish, and Finland is a somewhat different proposition from the other Nordic countries.) His voice definitely took on a humorous tone, but still in a restrained and slightly formal way - slightly self-conscious ("I know I'm being funny. Ha!"). At that moment, isolated chuckles rippled out around the room, obviously from the Swedes or fluent Swedish speakers. Some of the chuckles were pretty prolonged. When the poem was read in English, I was a little bemused. There was perhaps a gaiety and slight self-deprecation about it, but it was hardly a thigh-slapper. I sensed that this was a moment when something was lost in translation. I later described the poem (a bad idea, I know) and the reaction to my mother. She suggested that the Swedes were chuckling because "behind turned-up collars everyone was smiling." I thought that the narrator saw his neighbours in this way because he was so happy that he saw everyone else as equally happy, but she thought it had something to do with them being amused because, well, the narrator was being a bit silly, walking on air and all. I don't consider myself highly Scandinavian, but I spent a lot of time there as a child, and it's an influence, of course. When my mother described why she thought the poem got this reaction, my Scandinavian senses switched on again, and there was something there that I recognised.

My friend and I didn't feel that the evening was over after the Tranströmer event finished, so - as you do - we headed down to Brixton for some live music at Hootanannys. This is a famous live venue in south London - or just in London - and I'd been there a handful of times. They specialise in reggae and ska and they also serve some pretty decent food. The clientele is, to say the least, remarkably varied and bizarre. We had to fend off some pretty weird men. I think the most normal thing anyone said to us was "My friend used to work for the CIA" (or possibly "works for the CIA". I nearly said "Really? I love spies!" but fortunately bit my tongue just in time - saying that would probably have been a big mistake.) The spy theme continued when the hyperactive ska band on stage first played their own version of the Inspector Gadget theme, followed by a song which went "Double-double-double-double-double-O-SEVEN!" It was strange. And it was a true London night out: the contrasts will either finish you right off, or they will provide you with some of the most fun you have had all year.

Posted by Clarissa Aykroyd at 22:39