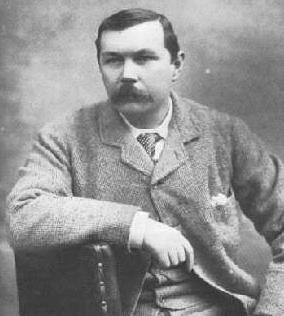 Sir Arthur Conan Doyle died on 7 July, 1930. Due to the recent BBC Sherlock series starring Benedict Cumberbatch, and the Robert Downey Jr films, interest in Doyle's work is probably at something like a 25-year high, if not a 50-year high or more. I thought it was especially marvellous that the Benedict fanbase and the Undershaw Preservation Trust got together to save Doyle's house in Hindhead, Surrey. (In fact, I was so delighted about this that one day I found myself with a friend in a Save Undershaw flash mob on Trafalgar Square, holding up BBC Sherlock DVDs and immortalized in photographs for eternity.)

It's quite possible, though, that Doyle would be a bit miffed at all the hoopla still surrounding his most famous character - an eccentric cocaine addict currently making waves as a "high-functioning sociopath". Doyle felt that his historical novels such as The White Company, and his later interest in spiritualism, were the legacies that he should leave to the world. He even tried to chuck Holmes off a high waterfall (I've been to the Reichenbach Falls - it's no joke) and ultimately didn't succeed. The fact is, though, that Doyle was by far at his best when he wasn't taking his writing too seriously; he was just that kind of writer. The Holmes stories, The Lost World, Brigadier Gerard, the horror-ish penny dreadful type stories - this is where he really shone.

I of course am utterly charmed by all the Holmes obsession floating around these days. RDJ is surprisingly entertaining (and Jude Law is a pretty cute Watson), Benedict Cumberbatch and Martin Freeman and their modern London are utterly fantastic, and I'm very glad that the all-time-greatest Holmes, Jeremy Brett, seems to have gained new fans and to be back on the radar. I've written before about how extremely formative Holmes has been in my life - he's probably the number one reason I ended up in London, if you trace it back.

Doyle was a poet, as well, but of a rather hearty Victorian/Edwardian variety which can't match up to Kipling (and I say that though I'm not a big Kipling fan.) I liked his poem 'Retrospect' but I think that has a lot to do with the references to courage and duty. I'm an admirer of those kinds of traditional values. Doyle was a real British gentleman in every respect you can think of.

I tend to think that Doyle's poetic talents lay more in the realm of clever doggerel. In 1912, critic Arthur Guiterman wrote the following poem both in criticism of and homage to Doyle:


Gentle Sir Conan, I'll venture that few have been
Half as prodigiously lucky as you have been.
Fortune, the flirt! has been wondrously kind to you,
Ever beneficent, sweet, and refined to you.
Doomed though you seemed --
One might swear without perjury--
Doomed to the practice of physic and surgery,
Yet, growing weary of pills and physicianing,
Off to the Arctic you packed, expeditioning.
Roving and dreaming, Ambition that heady sin,
Gave you a spirit too restless for medicine;
That, I presume, as Romance is the quest of us,
Made you an Author -- the same as the rest of us.

Ah, but the rest of us clamor distressfully,
"How do you manage the game so successfully?
Tell us, disclose to us how under Heaven you
Squeeze from that inkpot so splendid a revenue!"
Then, when you'd published your volume that vindicates
England's South African raid (or the Syndicate's),
Pleading that Britain's extreme bellicosity
Wasn't (as most of us think) an atrocity --
Straightway they gave you a cross with a chain on it--
(Oh, what an honor! I could not attain to it,
Not if I lived to the age of Methusalem!)--
Made you a Knight of St. John of Jerusalem!

Faith! as a teller of tales you've the trick with you!
Still there's a bone I've been longing to pick with you:
Holmes is your hero of drama and serial;
All of us know where you dug the material
Whence he was molded -- 'tis almost a platitude;
Yet your detective, in shameless ingratitude--
Sherlock your sleuthhound with motives ulterior
Sneers at Poe's "Dupin" as "very inferior!"
Labels Gaboriau's clever "Lecoq," indeed,
Merely "a bungler," a creature to mock, indeed!
This, when your plots and your methods in story owe
More than a trifle to Poe and Gaboriau,
Sets all the Muses of Helicon sorrowing.
Borrow, Sir Knight, but be decent in borrowing!

Still let us own that your bent is a cheery one,
Little you've written to bore or to weary one,
Plenty that's slovenly, nothing with harm in it.
Much with abundance of vigor and charm in it.
Give me detectives with brains analytical
Rather than weaklings with morals mephitical --
Stories of battles and man's intrepidity
Rather than wails of neurotic morbidity!
Give me adventures and fierce dinotheriums
Rather than Hewlett's ecstatic deliriums!
Frankly, Sir Conan, some hours I've eased with you
And, on the whole, I am pretty well pleased with you.


Doyle, good man, came back with the following:


Sure there are times when one cries with acidity,
“Where are the limits of human stupidity?”
Here is a critic who says as a platitude
That I am guilty because “in ingratitude
Sherlock, the sleuth-hound, with motives ulterior,
Sneers at Poe’s Dupin as very ‘inferior’.”
Have you not learned, my esteemed commentator,
That the created is not the creator?
As the creator I’ve praised to satiety
Poe’s Monsieur Dupin, his skill and variety,
And have admitted that in my detective work
I owe to my model a deal of selective work.
But is it not on the verge of inanity
To put down to me my creation’s crude vanity?
He, the created, would scoff and would sneer,
Where I, the creator, would bow and revere.
So please grip this fact with your cerebral tentacle:
The doll and its maker are never identical.
Posted by Clarissa Aykroyd at 20:45