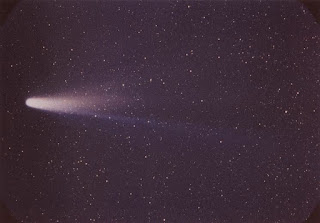 This link will take you to 'Halley's Comet' by Stanley Kunitz on the Poetry Foundation website. Many of his other poems, and biographical information, are also included.

The poem struck me because of its powerful evocation of childhood memories. The poet's memories are of a different nature from mine; a teacher in 1986 would probably not have told her class that if Halley's Comet "wandered off its course/and smashed into the earth/there'd be no school tomorrow." I was six years old when both Challenger and Chernobyl happened, as well; there was plenty of disaster going around then, already. I don't personally remember this, but my mother tells me that after the Challenger disaster, I came home from school and said to her that my young teacher had cried. As for the aftermath of Chernobyl, when we went to Finland as usual that summer, we were told to be more careful than usual about what we ate from the garden and so forth. Around when my Finnish grandmother died of cancer in 1995, other friends in that part of Finland were also being diagnosed with cancer or dying of it; it's hard not to wonder if there were connections to the disaster years earlier, although if the winds had blown otherwise, Finland might have been slapped even harder by radioactive fallout than it was.

The address to Kunitz's father, however, is something more than memory. His father died by suicide before he was born, and this presence who he never met constantly haunts his poems.

In my case, I remember seeing Halley's Comet in 1986, or maybe not seeing it. My father, mother, brother and I went out to the golf course in my hometown of Victoria, BC, which was the favoured star-gazing locale in town as it was a patch of exceptional darkness by night. We looked and looked and to this day we are not sure if we saw the comet. I think perhaps there were too many other faint and whirling stars that night to be certain. My parents are pretty sure that we did see it, and I suspect our gazes crossed it at least. Whatever really happened, it is a good memory. Years later, in 1997, we had an extraordinary view of the Hale-Bopp comet every night for weeks, immediately outside our front door practically every night (and outside a lot of people's front doors, I guess.)

The night sky is not one of my greatest fascinations, though it's perhaps just because I haven't sufficiently opened myself to it or because I have always lived in cities. The stars were much more visible where I grew up, although it is a (small) city too, but in London you really don't see much of them. I have been awestruck by the night sky in the deserts of Morocco and Australia, and even in the small desert ecosystem of the Okanagan in British Columbia. But mainly, this poem makes me think of the complex and interwoven nature of memory. Things which happened, things which didn't happen, inconclusive events, events which seem unrelated but are in fact intimately related, loss and emotion, things which have remained, lack of resolution and the eternal desire to find it.

Posted by Clarissa Aykroyd at 19:29