Poetry Parnassus on Sunday: Turkish 'Hawk In The Rain', Odessa to Kazakhstan, Translated Wonders and Word From Africa 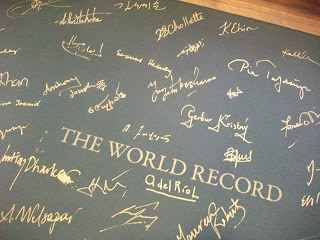 The above picture is the 'World Record' desk in the Saison Poetry Library, where poets had in the course of the week signed their names and hand-written copies of their poems for posterity.

My first Poetry Parnassus event on Sunday was the Ted Hughes Celebration, featuring Christopher Reid, Simon Armitage, David Constantine, Helen Constantine and a Turkish translator whose name I have regrettably forgotten (anyone remember?). I especially loved hearing 'The Hawk in the Rain' in Turkish: the percussive syllables seemed to work really well for that poem. There was much discussion of Ted Hughes's work on Modern Poetry in Translation, which David and Helen Constantine have been editing, and this was a bit beyond my scope but translation was obviously a strong focus of Poetry Parnassus so it was all interesting. I enjoyed hearing Paul Eluard's poem 'Poisson' (Fish) in the original French and then in Hughes's translation. The discussion about Hughes's translation of Ferenc Juhász's 'The Boy Changed Into a Stag Cries Out at the Gate of Secrets' was totally fascinating; he didn't know Hungarian, but somehow just knew that a previous translation was inadequate, and made his own (again...without knowledge of Hungarian!) which is considered masterful. (Is this hubris, or prophetic poetic vision? Given that we're talking about Ted Hughes, it could easily be either or both).

Before the start of this session, I spoke briefly with Akerke Mussabekova, who was Kazakhstan's poet at the festival and the youngest poetic delegate, and who I'd also met on Friday night when she arrived for Continental Shift with Carmela from Poet in the City, who had recognised me from Poet in the City events (Carmela, I'm very impressed that you remembered me!!). Akerke Mussabekova was a beautiful and tiny woman, a little shy but obviously happy to be there, and judging from her poem in the World Record anthology which accompanies the festival, she is a very talented poet.

After this, the Maintenant reading was drawing to a close in the Clore Ballroom just around when I got there, and I had just bought Ilya Kaminsky's Dancing In Odessa when I realised (completely by coincidence) that he was taking the stage. I sat in the audience and listened in wonder as he read like a wild-eyed sing-song Russo-Ukrainian-American Yeats x 1000. I looked around and saw quite a few others with eyes popping out of their heads and jaws slightly agape. Afterwards, Kaminsky signed the book for me. He had a very warm presence about him.

Subsequently, I caught some or more of the Banipal, Modern Poetry in Translation and Poetry Translation Centre readings. The latter, in particular, really amazed me. Sarah Maguire quite correctly and bravely stated that the white-middle-class-ivory-tower air of poetry in Britain doesn't reflect the vital nature of poetry around the world, and she and others with the Poetry Translation Centre have worked hard to bring African, Middle Eastern and Central Asian poets to a wider audience. Reza Mohammadi's poems totally transfixed me - he writes in Dari (modern Persian) and is originally from Afghanistan. His delivery transported me to somewhere much more remote and magical than the Clore Ballroom (although it was pretty good this past week) - he had the intense eyes and precise yet sweeping gestures of a prophet. It was thrilling to hear the Eritrean poet Ribka Sibhatu, and I was especially excited about the poems of Al-Saddiq Al-Raddi from Sudan, which are exquisitely beautiful. He was also kind enough to sign the chapbook of his poems after the session. We learned that due to current unrest in Sudan, many of his friends have been arrested and if he were in the country, he would probably be in prison as well. It was another sobering reminder of what poets and their ilk may go through in other countries.

Word From Africa was a wonderful conclusion to the festival. Earlier in the week, in the Saison Poetry Library, I had stood a few feet away while a distinguished older African poet recited his poem for a video recording, in French - it was a lovely moment. I found out on Sunday night that this was Paul Dakeyo, who read some more of his work, and who is an African poetic legend from Cameroon. His poems were incredibly beautiful and moving and it was wonderful that I could appreciate the French. 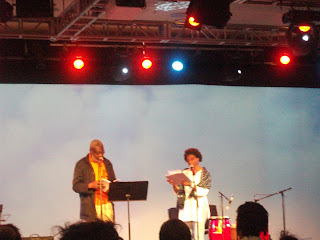 There were poets from various African countries, and the Bajan-British poet Dorothea Smartt (pictured above with Paul Dakeyo), and poets of African extraction who'd grown up in Britain, and so on - it gave a fantastic variety to the mix. I was joined by some friends and had a drink with them, so I'm afraid we were a bit distracted at this point, and later we went out to find a pub showing the Spain-Italy Euro 2012 final (which was good fun, though football is not my thing - how Canadian am I?). But we returned in the end for some Afro-Caribbean music by a funky little band (whose name also escapes me - anyone?). There were relatively few poetry/music survivors around at that point, and some of us were very bad dancers, but it was great fun. I longed to see Seamus Heaney suddenly appear and start grooving in front of the stage. I can imagine it happened...

There were too many highlights to name from Poetry Parnassus. As well as some of those I've mentioned, I was delighted to meet Simon Armitage on one of the staircases and to thank him for the hard work he'd done to get this event together. He seemed pleased and said that they were all planning to collapse at the end of the day. Simon, thank you again, and to everyone involved and especially the poets.

This was one of my cultural highlights of my London years and in terms of where my poetry appreciation is at, I don't think it could have come at a better time. I have lots of reading and writing to do!

Posted by Clarissa Aykroyd at 21:14