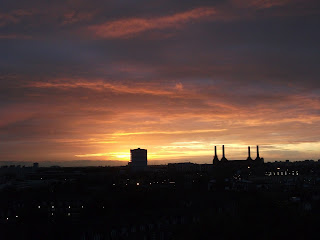 
A livid sky on London
And like the iron steeds that rear
A shock of engines halted
And I knew the end was near:
And something said that far away, over the hills and far away
There came a crawling thunder and the end of all things here.
For London Bridge is broken down, broken down, broken down,
As digging lets the daylight on the sunken streets of yore,
The lightning looked on London town, the broken bridge of London town.
The ending of a broken road where men shall go no more.

I saw the kings of London town,
The kings that buy and sell,
That built it up with penny loaves
And penny lies as well:

And where the streets were paved with gold the shrivelled paper
shone for gold,
The scorching light of promises that pave the streets of hell.
For penny loaves will melt away, melt away, melt away,
Mock the men that haggled in the grain they did not grow;
With hungry faces in the gate, a hundred thousand in the gate,
A thunder-flash on London and the finding of the foe.
I heard the hundred pin-makers
Slow down their racking din,
Till in the stillness men could hear
The dropping of the pin:
And somewhere men without the wall, beneath the wood, without
the wall,
Had found the place where London ends and England can begin.
For pins and needles bend and break, bend and break, bend and break,
Faster than the breaking spears or the bending of the bow,
Of pagents pale in thunder-light, 'twixt thunderload and thunderlight,
The Hundreds marching on the hills in the wars of long ago.

I saw great Cobbett riding,
The horseman of the shires;
And his face was red with judgement
And a light of Luddite fires:
And south to Sussex and the sea the lights leapt up for liberty,
The trumpet of the yeomanry, the hammer of the squires;
For bars of iron rust away, rust away, rust away,
Rend before the hammer and the horseman riding in,
Crying that all men at the last, and at the worst and at the last,
Have found the place where England ends and England can begin.

His horse-hoofs go before you
Far beyond your bursting tyres;
And time is bridged behind him
And our sons are with our sires.
A trailing meteor on the Downs he rides above the rotting towns,
The Horseman of Apocalypse, the Rider of the Shires.
For London Bridge is broken down, broken down, broken down;
Blow the horn of Huntington from Scotland to the sea --
...Only flash of thunder-light, a flying dream of thunder-light,
Had shown under the shattered sky a people that were free.


One of my friends, another London enthusiast, introduced me to this poem a year or two ago. I haven't so far found much information about its genesis, or the precise nature of its political thrust and message. William Cobbett, appearing in this poem as a sort of Fifth Horseman of the Apocalypse, was a journalist and campaigner of the late eighteenth and early nineteenth century, fighting for Parliamentary reform and the rights of the poor, so I suppose it is along those lines. For me, inevitably, it conjured some scenes of the August 2011 riots in London - which raises even more political and social questions.

In any case, the poem's imagery is fantastically powerful, and quintessentially London: chaotic and apocalyptic, at one and the same time reeling with sensory detail and with metaphoric, archetypal resonances. My kind of poem, pretty much.

I took the above photo from the window of the penthouse in Stockwell, now part of my past. It still feels a bit sad to have given up that billion-pound view. However, when I walk out the front door of my new home and look to the right, I see Battersea Power Station looming so large and so close that it looks like it might pounce. A sight I love to see, obviously. I realised some time ago that while life really doesn't replace, it frequently offers compensation.

Posted by Clarissa Aykroyd at 23:47