'Hurt Hawks': Robinson Jeffers By Way of Watership Down 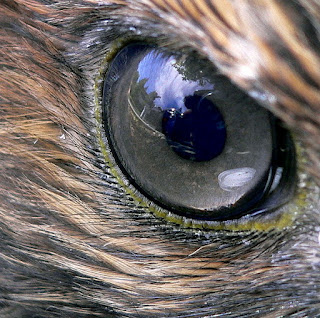 Over the years, and especially from about ages 7 to 20, there have been certain authors, works and characters which have been especially formative in my life. One of these was Watership Down, which I have already mentioned here and there in this blog. I think I was ten or eleven when I first read it, though I remember an abortive attempt a few years earlier, when I was really a bit too young and I think my mother had brought it home from the library for my older brother to read.

Watership Down was significant for me in a good many ways. It reinforced my love for nature, animals and talking animal books (a genre which seems to have gone significantly out of fashion - but for some years it was almost the only kind of book I wanted to read). It is one of the most English of books - if I remember correctly, Richard Adams based the characters partly on his friends during his time in the military - and it increased my fascination with all things English. It was also just an exciting, moving, funny, passionately written book which inevitably appealed to a sensitive child with a vivid imagination.

The book also features an epigraph at the start of every chapter, taken from world literature, and giving just a hint of what is to come in that chapter. These vary widely - from Shakespeare, the Bible, Jane Austen, Greek and Roman classics, Joseph Campbell's The Hero With a Thousand Faces, The Wind In the Willows, and so on. It is in no way an exaggeration to say that I discovered a few writers that I really admire from these epigraphs. Sidney Keyes, one of the great World War II poets, is quoted at the start of one chapter, from his 'Four Postures of Death', and in recent years he has become a very significant poet for me. These phrases, like passages from the novel itself, have become a part of me and echo through me at many and various times in my life.

One of the epigraphs featured a quotation from 'Hurt Hawks' by American poet Robinson Jeffers:


It was in the chapter where Kehaar, the crazy gull, is found wounded and adopted by the Watership Down rabbits. (I'm honestly not sure if his accent was supposed to be Jamaican, or Polish, or what, but it wasn't all that politically correct.) The few lines of the poem made a deep impression on me. I don't even like birds that much, but I could just see everything in this poem. I could see the fearsome, pained glare of the wounded bird, the sense that death is encroaching.


He is strong and pain is worse to the strong, incapacity is worse.
The curs of the day come and torment him
At distance, no one but death the redeemer will humble that head,
The intrepid readiness, the terrible eyes.


I've now also read some of Robinson Jeffers' other poems. I think he is a bit out of fashion these days and in all honesty I do not see him becoming one of my favourite poets. He became most notorious for writing a long poem about incest, 'Tamar', and for a mode of thought called inhumanism. As far as I can tell, this posited that human beings are too indifferent to the beauty of the natural world and that their disappearance wouldn't be a great loss. (I admit that I may not have this quite right, but that's more or less how I understood it.) The great Polish poet Czesław Miłosz, who was a believer, wrote a very interesting poem, 'To Robinson Jeffers', in which he rejected Jeffers' inhumanism and deplored the "nakedness of elements" in a godless world, or at least a world in which God and humans could not have anything to do with each other.


Thin-lipped, blue-eyed, without grace or hope,
before God the Terrible, body of the world.
Prayers are not heard. Basalt and granite.
Above them, a bird of prey. The only beauty.


I'm not sure about Jeffers' beliefs - I have seen it suggested that he was a pantheist, but in any case, it seems pretty certain that he did not believe in a personal God. His vision of nature is indifferent to humanity, beautiful, stark and annihilating. In 'Hurt Hawks', the man does give release to the wounded hawk by killing him, but the bird's incandescent life force is still greater even as he dies:


[...] I gave him the lead gift in the twilight. What fell was relaxed,
Owl-downy, soft feminine feathers; but what
Soared: the fierce rush: the night-herons by the flooded river cried fear at its rising
Before it was quite unsheathed from reality.

Posted by Clarissa Aykroyd at 21:53