"Where I Will Heal Me Of My Grievous Wound": Arthuriana In My Life 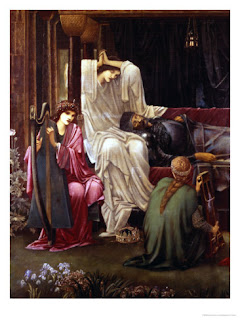 from THE PASSING OF ARTHUR (Alfred, Lord Tennyson)


And slowly answered Arthur from the barge:
"The old order changeth, yielding place to new,
And God fulfils himself in many ways,
Lest one good custom should corrupt the world.
Comfort thyself: what comfort is in me?
I have lived my life, and that which I have done
May He within himself make pure! but thou,
If thou shouldst never see my face again,
Pray for my soul. More things are wrought by prayer
Than this world dreams of. Wherefore, let thy voice
Rise like a fountain for me night and day.
For what are men better than sheep or goats
That nourish a blind life within the brain,
If, knowing God, they lift not hands of prayer
Both for themselves and those who call them friend?
For so the whole round earth is every way
Bound by gold chains about the feet of God.
But now farewell. I am going a long way
With these thou seëst--if indeed I go
(For all my mind is clouded with a doubt)--
To the island-valley of Avilion;
Where falls not hail, or rain, or any snow,
Nor ever wind blows loudly; but it lies
Deep-meadowed, happy, fair with orchard lawns
And bowery hollows crowned with summer sea,
Where I will heal me of my grievous wound."


Everything in my life has always seemed to lead on to something else. I suppose that's probably so normal as to seem trite (or not), but to me even random events tend to seem teleological, or at least part of a pattern.

I was always fascinated by medievalism as a child. My brother and I preferred the Legos which built knights and castles to the "town" and "space" versions (those were simpler times); we played at knights and read Tolkien, Ivanhoe and Knight Crusader. My brother did his MA thesis on Robin Hood. I've since moved on to Gladiator, but it's much the same thing. Somewhere in there, King Arthur was bound to emerge as a major obsession, which happened in my late teens.

17-22 was quite a critical age for me, and I developed such a passion for Arthuriana that I seriously considered doing an English MA with an Arthurian focus. I didn't, but it would have been an interesting path. I did a mini-thesis for my BA on Merlin, and had a short story on Bedivere and the Questing Beast published. Also, judging by my bookshelves in my parents' house, I seem to have collected pretty much every modern Arthurian retelling going - those that aren't on the shelves I borrowed from the library. While I also collected and read a lot of the original medieval tales, I tended to find them harder going. Unfortunately, quite a lot of the modern works were a bit too much in the bodice-ripping romance vein or were influenced by neo-paganism, neither of which are remotely my cup of tea. It was actually quite hard to find really good, well-written Arthurian novels. Mary Stewart's Merlin trilogy (The Crystal Cave, The Hollow Hills, The Last Enchantment) was very significant for me, and I also loved Rosemary Sutcliff's books - her more traditional retellings (The Sword and the Circle, The Light Beyond the Forest, The Road to Camlann) when I was younger, and her adult novel Sword at Sunset when I was older. Gillian Bradshaw's novels were great too. As much as I like the idea of retelling old stories, though, a lot of the novels were rather forgettable.

I did like Tennyson very much, but I read relatively little Arthurian poetry that made a really big impression. Edwin Muir's poem 'Merlin', quoted at the start of one of Mary Stewart's novels, was beautiful and moving:


O Merlin in your crystal cave
Deep in the diamond of the day
Will there ever be a singer
Whose music will smooth away
The furrow drawn by Adam's finger
Across the memory and the wave?


I also read Edwin Arlington Robinson's excellent long poems, and some of Charles Williams's strange Taliessin Through Logres and The Region of Summer Stars, and other short poems here and there. But there might just be a world of Arthurian poetry out there for me to discover, still.

I have often told people that Sherlock Holmes was a major reason why I ended up moving to London, or that he at least helped me to develop an obsession with all things English. To a certain extent, I could say the same about Arthuriana, though it was a later passion in my life than Holmes. In 2002 I went to the International Arthurian Society conference in Bangor, Wales, and although I really did want to go, it was partly a pretext to get my European (er, British Isles) adventure started. It had also led me broadly to an interest in English and Welsh mythology.

By the time I moved to London seven years ago, Arthuriana had really receded in my life. Sherlock Holmes seems to have stuck around more intensively, especially of late, with the new BBC series to enthrall me. Holmes is more alive to me in London. I've only really walked in the steps of Arthur in Wales, and that as though in a dream. There are so many Arthurs and Merlins and so many places where they could have lived or not lived. Still, Arthur never went away. I went up to Liverpool a few years ago specifically to see Burne-Jones's The Beguiling of Merlin in Port Sunlight, and I was not disappointed. I've chosen it as the logo of sorts for this blog. Then, in 2009 or 2010 (not sure which) I had a wonderful experience with the painting above, Burne-Jones's The Last Sleep of Arthur in Avalon.

The Last Sleep of Arthur in Avalon has been the Ponce Museum of Art in Puerto Rico for a long time, and I thought it was unlikely that I would ever see it. I'd like to visit Puerto Rico, but it is not high on my list. I was therefore totally astounded and delighted when I learned one day that the painting was in London, though only for a year. It was on loan from its home gallery while the gallery underwent renovation. At the time, I was working in Pimlico, and the painting was only around the corner at Tate Britain. Already feeling stunned about the whole thing, I went round to see it one day.

I remember walking through the familiar rooms of Tate Britain with a sense of purpose and slipping into the room where The Last Sleep of Arthur in Avalon was displayed. I sat down and just stared at it. I was overcome with the kind of shock and delight that sometimes takes me in artistic experiences - especially those which aren't just artistic experiences, but are tied up with so much else in my life. The painting is enormous (the picture above is only a detail from it) and extremely beautiful; classically Burne-Jones, with luminous colours and figures looking like angels. I got up and walked around to look more closely at the details - the flowers, the folds in the robes - and then sat down and stared again.

I went back to see it two or three more times before it went back to Puerto Rico, though I now wish I'd seen it even more. The experience still amazes me to think of, as I just never thought this was a painting I would lay eyes on and certainly not in London (for one thing, it seemed much to big to travel!). Seeing this painting confirmed to me, as well, that nothing and no-one ever leaves the pattern - old obsessions, artistic passions, people and places - even if they seem to be a part of my past.

Posted by Clarissa Aykroyd at 22:18