Seven Years In London: Smoke, Mirrors and the Sweet Smell of Road-Tar 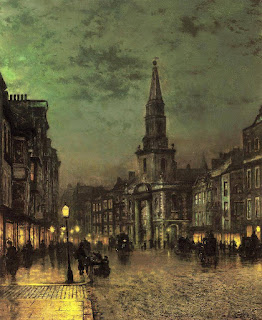 This painting is by John Atkinson Grimshaw, a Victorian painter whose works have elements of the Pre-Raphaelites and JMW Turner. He is well known for his cityscapes, including London, Leeds, Liverpool and Glasgow, and he is set to become one of my favourite artists, I think. This particular work shows a street in Borough, south London.

On 27 July 2012, as far as I've been able to ascertain (from looking up my old BMI flight reservations), it was seven years since I moved to London - which means that I am only about a month late with this entry. It was an odd day; hardly what I would have expected. Two days earlier I had suffered a mishap at home when a sharp-edged object fell over and left me with a nasty cut on my face. The NHS, bless them, offered me a plastic surgeon, so 27 July found me at St Thomas's Hospital to get stitched up. It was also the day of the Opening Ceremonies of the London 2012 Olympics (perhaps worth an entry in itself, especially if I can find an appropriate poem.) I later watched some of it at home, feeling a bit miserable, but I found the British history section spectacular and moving.

Too many posts about London already, you might be thinking, but it's a well that never runs dry for me. There can never be an end to writing, thinking and dreaming about a great city, as well as just getting out into its streets and experiencing it. When I moved, I thought it likely that I would stay longer than my time in Dublin - three years - but I surpassed that long ago, and I don't have plans to leave. I'm one of those misfits of the world who is more at home in London than anywhere else, it seems.

I recently read Craig Taylor's Londoners, subtitled The Days and Nights of London Now - As Told by Those Who Love It, Hate It, Live It, Left It and Long for It. Craig Taylor is a Vancouver Islander who has adopted London, just like me (although I hasten to add that he is from Nanaimo, and I am from Victoria. I met him briefly at a publishing networking event a few years ago and we chatted a little, mainly about the ex-pat thing and the Island. He had dared to say something about the class-ridden nature of the publishing industry, which mostly met with embarrassed looks and nervous giggles. I nearly cheered.) Not surprisingly, I found the book totally beguiling - even the commentaries by people who hate the place. There was so much that was familiar in it, but seen through a variety of different lenses. The City boy, the airline pilot, the dominatrix - it was rather odd to find echoes of my own feelings and my London moments in these lives. There were passages which I found incredibly resonant, almost as though they'd been taken straight out of my brain:


Places make the best lovers. You can trust a place more than you can trust a person as a lover. A place is more dependable and it has so much depth and stimulation and provides you with the opportunity to realize yourself. The place reflects you, provides you with stimulation, the ability to realize potential. If it's a good place it makes you feel stronger, makes you cleverer and more powerful. I did a walk with someone from the centre of the City to Soho, just taking a beeline, and on that walk ended up going into the Temple Church in the middle of the Temples so I was back in the twelfth century after already having gone into the Black Friar pub, an Arts and Crafts pub, and walking through the centre of Covent Garden and ending up in a Chinese restaurant having dim sum. Now there are not many people who can give you that much stimulation, but being with a person and having the ability to have that friend, London, as a companion throughout gives you a wonderful extra dimension to anything you do. I think of London as a partner. I'm in love with London and always have been. (Peter Rees, City Planning Officer, City of London)


The trouble with this sort of thing - which I find almost entirely true - is that it can feel as though the city is becoming your primary relationship: basically, not good. But very seductive. If there's such a thing as taking a drug in moderation, that would have to be the way to approach London. (I am told by someone who knows, from past experience, that London is like heroin.) When I went back to Canada for a visit a few months ago, I told an old family friend that London pulls you into its patterns and rhythms and tides so that you find yourself breathing in tune with it. Which is both exciting, and sinister.

There was also a passage in Craig Taylor's introduction, where he describes his own London experience, which was extremely familiar:


I hadn't yet become an urban otter - one of those sleek Londoners who moves through the city with ease. They're the ones who seem slow and graceful but are always covering ground, who cross streets without looking back and forth; who know how to fold a newspaper crisply in the middle of a packed Tube train. (Craig Taylor)


Maybe I flatter myself, but I'm pretty sure I've become an urban otter. The best way to move through London is like breathing, like water is your element. I tread more lightly than I used to and I've found ways to flow through a crowd on an Underground platform without hardly touching anyone (these sometimes involve dislocating your hips from your torso - but it's strangely like a dance.) Passing the six-month point in London is pivotal. At that moment, I started to feel like I had a few friends; I also noticed that I was scanning my environment in a different way, and building a sort of transparent/semi-permeable wall around myself, something which allowed me to be more detached and more involved than ever before. Certainly, after years in London you react quite differently to the news of violent crime just down the street than you do during the first six months.

Another recent acquisition is the poetry anthology London, compiled by Mark Ford. It traces London's history and people and life in poetry, from ancient times to the present. I've only dipped into it so far and look forward to further exploration. London is drenched in poetry and this is how I see it, increasingly. It is both a way to shelter myself from harsh realities, and a way to get further and further in, closer to the heart (or hearts) of the city. This summer, during the Olympic and Paralympic Games, there has been a soundscape installation on the Millenium Bridge called Tales from the Bridge. It samples contemporary and historic literature and poetry to give glimpses of the city - mainly the Thames - through the spoken word. I stopped by to experience it recently, and found it quite intriguing.

I've picked out a few London poems which add to the richness of the city's tapestry, and which have a few familiar echoes, as well.

Tamar Yoseloff's 'London Particular' seems very much to be from the city-as-state-of-mind tradition. Sometimes you can see someone's face wherever you look, and all else fades. This poem captures a good deal of London's bleaker aspects, I think. Strangely, it also made me think of my Finnish grandfather, who I never knew because he died before I was born. He was briefly in London in the 1950s when London experienced one of its last pea-souper fogs (or "London particular"). I could very much see him as the gentleman in this poem.

'London Pastoral' by Tobias Hill, another contemporary London poet, is gentler but still gritty. I recognise its smell: "hallways sweet/with the residue of road-tar." London is such a juxtaposition of the ugly and dirty, and the beautiful; this poem is a good example.

Finally, this strange, sad poem by T E Hulme really touches me. The darkness and the bright glancing sparks of it are very London. Hulme was mainly a critic and sometimes a poet, and died on the front in Belgium in 1917.