Birdsong in the Trenches: Isaac Rosenberg and Humbert Wolfe 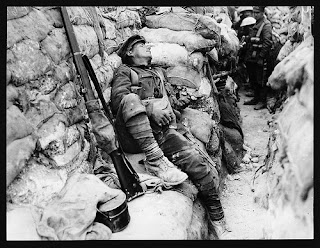 There are plans afoot in London to erect a statue to Isaac Rosenberg, one of England's great World War I poets. He grew up in the East End and studied in Bloomsbury, and the statue is planned for Torrington Square. Rosenberg studied at nearby Birkbeck College and the Slade School of Fine Art (he was also an artist).

I'm quite fond of what I've read of Rosenberg's work. It is rather modern in outlook, and poignant but not too innocent. Tonight I wanted to post a poem by Rosenberg, and another by Humbert Wolfe. They are both about the brief glimmer of hope and beauty brought to men in the trenches by the sound of birdsong. Rosenberg fought and died in the trenches, and I think Wolfe's participation in the war was at a greater distance, but these poems seem to spring from a similar source.

This photograph is French, and the soldier is sleeping, not dead. How difficult it must have been to sleep under such circumstances I can hardly imagine. Whenever I have seen trench warfare depicted in films and so on, I always think of how extremely far it must have been from the reality. I probably haven't seen any films sufficiently violent and explicit enough to depict anything really close to the reality; and even then, how close could they come?

Here are the poems: 'Returning, We Hear the Larks' by Isaac Rosenberg, and 'A Thrush in the Trenches' by Humbert Wolfe. (The Wolfe poem made me think of Thomas Hardy's 'The Darkling Thrush', too.)

Sombre the night is.
And though we have our lives, we know
What sinister threat lurks there.

Dragging these anguished limbs, we only know
This poison-blasted track opens on our camp -
On a little safe sleep.

Death could drop from the dark
As easily as song -
But song only dropped,
Like a blind man's dreams on the sand
By dangerous tides,
Like a girl's dark hair for she dreams no ruin lies there,
Or her kisses where a serpent hides.

A THRUSH IN THE TRENCHES (Humbert Wolfe)

Suddenly he sang across the trenches,
vivid in the fleeting hush
as a star-shell through the smashed black branches,
a more than English thrush.

Suddenly he sang, and those who listened
nor moved nor wondered, but
heard, all bewitched, the sweet unhastened
crystal Magnificat.

One crouched, a muddied rifle clasping,
and one filled a grenade,
but little cared they, while he went lisping
the one clear tune he had.

Paused horror, hate and Hell a moment,
(you could almost hear the sigh)
and still he sang to them, and so went
(suddenly) singing by.

Posted by Clarissa Aykroyd at 00:55