Green and Pleasant Games: Blake's 'Jerusalem' and the London 2012 Olympics and Paralympics 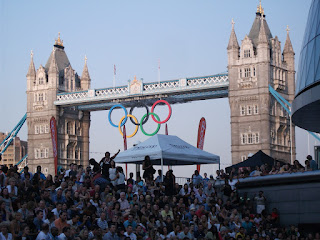 And did those feet in ancient time
Walk upon Englands mountains green:
And was the holy Lamb of God,
On Englands pleasant pastures seen!
And did the Countenance Divine,
Shine forth upon our clouded hills?
And was Jerusalem builded here,
Among these dark Satanic Mills?
Bring me my Bow of burning gold:
Bring me my arrows of desire:
Bring me my Spear: O clouds unfold!
Bring me my Chariot of fire!
I will not cease from Mental Fight,
Nor shall my sword sleep in my hand:
Till we have built Jerusalem,
In Englands green & pleasant Land.


The London 2012 Olympic and Paralympic Games ran from late July until early September. It is hard to believe that it is all over, and equally hard to believe that everything went so well; I don't want to say "flawlessly", but some have definitely said so. The forecasted transport apocalypse didn't happen (in fact, it tended to be weirdly quiet away from the venues) and most everyone had a jolly good time. In fact, we all beheld the extraordinary spectacle of the British gushing uncontrollably about the awesomeness of their green and pleasant land, their people, and especially their athletes. I was less surprised when this happened during the 2010 Winter Games in Vancouver, because Canadians can be pretty gushy about Canada anyway, but the default for the Brits is usually self-deprecation at best about Britain.

At the start of the Olympic Opening Ceremonies, a boy soprano sang Blake's 'Jerusalem', in its famous musical setting by Sir Hubert Parry. This was utterly predictable and still very moving. 'Jerusalem' is taken from the much longer Milton a Poem, and describes a story wherein the young Jesus Christ visited England. There is no historical basis for this story, but it is a beautiful poem and piece of music. It is time for me to admit that I first came to it through Emerson, Lake & Palmer's version, during my prolonged progressive rock period in my teens. I still hear Palmer's mad drumming in the background.

'Jerusalem' is a piece very beloved of the British, or at least the English. I have been present when it's played or sung and it offers a rare glimpse of naked emotion in the English, as well as being rather mystical and somewhat bonkers. These were qualities that also came to the fore during the Games - Britain performed extremely well in both the Olympics and the Paralympics. Although poetry's voice was heard in various ways during these Games - modern poems scattered around the Olympic Park, glimpses of verse during the Ceremonies - this old poem by the great and strange Blake still represents the spirit of the Games, to me.

I spent both the Olympics and the Paralympics either quite involved, or rather detached. It seemed as though I was either in the thick of things, or catching glimpses from a distance. The Torch went right past my window in south London on a day when I was at home, and that was quite exciting. Also predictably, these were mainly Horse Games, for me. I managed to snag tickets for both Olympic and Paralympic dressage, both of which were cheap and utterly irresistible. The Olympic dressage was at Grand Prix level and was extraordinarily beautiful and skilled - these horses are the Cadillacs of the equine world. Here is Britain's Carl Hester on Uthopia, part of the gold-medal-winning team: 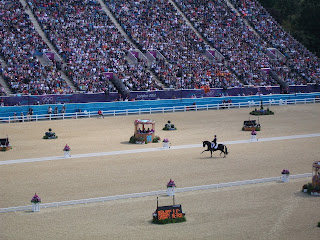 The Paralympic dressage featured riders with a variety of disabilities, generally involving inability to use their legs or one side of their body, due to spinal injuries, cerebral palsy and so on - one rider was actually born without legs. Here, the wonder was at watching an extraordinary sympathy between horse and rider under difficult circumstances, although the movements were less complex than in the Olympic competition. I found both events very moving, in somewhat different ways. Here is Britain's Natasha Baker on Cabral, the gold medallist: 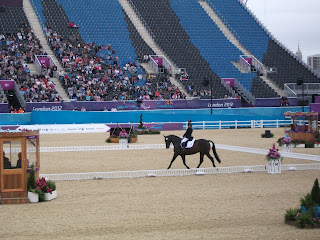 I also went out with a friend to Box Hill in Surrey to see the women's cycling road race, which involved walking 45 minutes up a fairly steep hill, getting rained on, dodging a thunderstorm and then broiled by the sun, cheering our heads off for every competitor, and generally having a very fun day out. 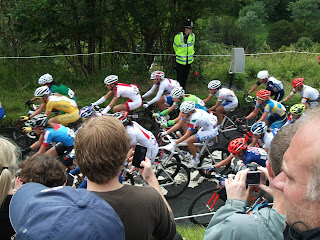 As far as detachment, I don't have TV at home, so I missed a lot of the coverage. Still, I enjoyed some events on big screens set up in public places, including near my work, and there was a generally festive atmosphere. I'm not that devoted to most summer sports anyway (a lot of Canadians prefer the Winter Games and I fall into that category). It was also particularly nice to see how cheerful, helpful and obliging virtually all the staff, volunteers, police, military, etc involved in the Games were. I really feel that post-Games London could benefit from trying to keep at least a bit of that spirit going.

In a sense I was relieved when it was all over, as I tend to worry about issues surrounding security; perhaps overhyped like all the other negative aspects. On the other hand, now the autumn and winter are stretching ahead and looking darker every day. I think I need to ensure that the coming months are filled with things that are important, fun, or both.

Posted by Clarissa Aykroyd at 20:47