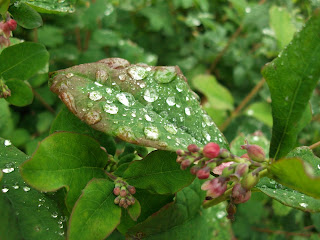 The above link will take you to P K Page's 'After Rain', a few of her other poems and some biographical information, from the University of Toronto Libraries website's section on Canadian poetry (http://www.library.utoronto.ca/canpoetry/index.htm).

Victoria, on Vancouver Island, was a beautiful place to grow up. I didn't fully realise it until I left, and probably not even for a few years then. I regularly get people telling me that I'm crazy because I left British Columbia, and especially the Island, to live in London. Well - Londoners tell me I'm crazy; Islanders, when I go back home, remind me incessantly that it's the most beautiful place on earth and tell me how much I must miss it. I do miss it, of course; I miss fresh air, the ever-present ocean, the parks and flowers, some of the most striking scenery in the world (the Olympic Mountains painted across the horizon on the Strait of Juan de Fuca) - the list goes on. Also "of course", I had to leave eventually, and I am not sorry that I ended up in London. But I wish that I could go back more often, most importantly to see my family and friends. I took the above picture on a visit home this summer (June 2011).

Reading P K Page's poems brings back a flood of memories from Canada. I discovered her in a summer Canadian poetry class at university, and simultaneously discovered that contemporary poetry was quite a wonderful world. I remember doing a presentation on 'Cook's Mountains', a brilliant description of how language and names alter our perception: "instantly they altered to become/the sum of shape and name." I somewhat irrelevantly raised the point that images in the poem reminded me very much of a scene in Watership Down, but Doug Beardsley, the instructor and a poet in his own right, seemed to like it. And I remember being captivated by 'Stories of Snow', one of the greatest Canadian poems. Page was born in England but moved to Canada as a small child and lived there for most of her life, so she was certainly Canadian. However, she also lived with her diplomat husband in other countries including Australia and Brazil. 'Stories of Snow' beautifully describes how people with one set of experiences, or in one environment - in this case, the tropics - fill in their emotional landscape by dreaming of places that are very different. Although I'm not sure where Page lived when she wrote that poem, a friend pointed out to me that there was something very West Coast about these lines:


And stories of this kind are often told
in countries where great flowers bar the roads
with reds and blues which seal the route to snow...


Smug West Coasters do love it when the cherry blossoms, tulips and daffodils flower magnificently in the spring, and they can call their relatives out East, who are still snowbound.

I believe it was in 2000 when I went one evening to Victoria's James Bay Inn to hear P K Page read. My mother, also a fan, came with me. Page was a beautiful and stately lady - she would then have been about 85. I was one of a queue of people who politely lined up to ask her if she could read a particular poem. I told her how much my Canadian poetry class had loved 'Stories of Snow' and asked if she could read it, but sadly she didn't have a copy with her. I had also loved 'After Rain', so asked her if she could read that instead. When she got up to read her poems, she graciously but laughingly told us that she'd had to significantly rearrange her program because she'd had so many requests. I remember that she read 'Poor Bird', and the relish with which she delivered the line "Poor bird, he is obsessed!". And she did read 'After Rain'. I remember so vividly the turn of her head and the brightness of her eyes as she read: "O choir him, birds, and let him come to rest/within this beauty as one rests in love". Page died last year at the age of 93. I wish that she had made it to 100, as so many senior citizens living in Victoria do.

'After Rain' also reminds me of the West Coast simply on its own: a garden drowned in chlorophyll, and Page delighting in the lacy creations of the snails all over her cabbages. It is a wet climate, and the outdoors can drip seemingly for days after a day or six of heavy downpours. The poem's sharp but delicate imagery, its ornate but pure tone, are typical of Page's best work. The lines "Keep my heart a size/larger than seeing" have echoed in my mind for many years now.

I realised that I didn't quite say what I wanted to say about Celan in my last entry, but I will probably have to return to him. It occurred to me that his abstract but extraordinarily precise images are somehow like electrodes placed on the reader's emotional centres, to stimulate wonder and fear and grief. Then, when I was tracing some more information about Celan, I found out that he underwent electroshock therapy for his severe depression. That was quite unsettling.

I also learned that Celan and P K Page were both born on November 23; Page in 1916, and Celan in 1920. It is strange to think that had he lived, I could potentially have met Celan, as I did Page. I am not sure if Celan influenced Page (more likely than the other way around, given his much greater fame), but I have thought that if his life had been less ravaged by tragedy, there might have been some more similarities between their work. There is something that seems to link them for me, as well as the coincidence of their birthdays; something in the images that they choose. They were certainly both in love with flowers, and birds, and images of minerals, and broken glass, and the changing perspective of the eye.
Posted by Clarissa Aykroyd at 23:53