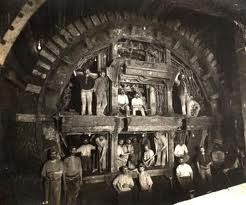 
I will rise in this heat and rod myself south,
muscular forearms with their black guard hairs
shoving beneath the elbow-cuffs of my blue shirt
confidently, only cut by the brown leather band
of my watch ticking like a banked departure board.
People drain around me like the tide receding
around a sandbank, or like grains of sand dragged
very beautifully but helplessly into the offing:
a boy with chipped black fingernails and hair
swept from his eyes, smeared black Chloé eyeliner:
a pregnant woman like the Santissima Trinidad,
straining serenely windward, all her sails billowing.
In caelo, in caelo I see all these forms surrendering
themselves to my angel posture, clenched fingers
forming four perfect scarp-and-tarns, two thumbs,
the thumb-knuckles pressed up against my lips,
head bowed, knees on the floor of gum and muck
among throstling bodies going down into the floodlit
dark, soaring of fahrenheit, everything burning like
hellfire, beautiful. Bermondsey, Angel, Deptford.
I will rise in this oven's ferocity like bread, leaven.

In his great book London: The Biography, Peter Ackroyd (no relation) describes the city as having a "dark secret life" and adds: "Darkness is of the city's essence; it partakes of its true identity; in a literal sense London is possessed by darkness." Ackroyd is the city's truest biographer that I have encountered so far, because he understands that it is a hidden city and that the shadows are everywhere. Other writers whose descriptions of London have impressed me, such as Christopher Fowler in his unique Bryant and May mysteries, partake of a similar vision. Peter Ackroyd is a champion of psychogeography, or the study of how urban environment can perpetuate patterns of emotion and behaviour in a population, even across generations. To me, this is a very valuable way of looking at London and trying to come to grips with its darkness.
Anyone who has lived long enough in London will have experienced the moments when darkness takes hold and something sweeps through; aggression, madness, or simply grief. I moved to London in July 2005, a few weeks after the 7/7 bombs, and it was in the air, creating an unusual tension behind the matter-of-factness so stoically maintained by Londoners. I recently felt it during the August riots of this year - although I didn't witness any of the riots firsthand, I was not too far away from some affected areas, and I have seldom felt so threatened by the city.
London is a delphic city - it can change with stunning quickness, and it is also ambiguous. Its darkness can be alluring. The Underground is an almost daily nuisance for me, but I still feel a sense of mystery hanging about it; passageways which lead you back to where you began, tunnels that seem permanently unused, the knowledge of lost and abandoned stations. Sometimes it is a fusion of the symbolic and the literal. Anyone who has run up the escalator at Angel - the longest in the Underground system - may recognise that it feels like more than an escalator run; with a name like that and the upward sweep, it suggests transcendence.
The Poems on the Underground campaign has brought poetry to a wider commuting audience, and of course the Underground has inspired its own poetry. Seamus Heaney has written at least a couple of brilliant poems inspired by it. In 'The Underground', he sees himself and his wife as Orpheus and Eurydice: "all attention/For your step following and damned if I look back." In 'District and Circle', partly inspired by a London recently touched by terrorism, he describes "a window mirror-backed/By blasted weeping rock-walls./Flicker-lit." These poems see the Underground as a true underworld.
A few years ago, on the night when mayor Boris Johnson banned drinking on London transport, I felt the darkness sweep through the Underground. Waiting for a Hammersmith and City line train at King's Cross/St Pancras, my friends and I watched one pull up, saw the doors slide open and then heard a howling, moaning din emerge from within and saw what seemed to be every drunk in London screaming with delight, smashing bottles and beating the doors with sticks. We turned tail and headed for the buses, of course. There was nothing funny about this experience. There was something about it that was pure darkness.
The young English poet Toby Martinez de las Rivas (who very kindly gave me permission to reproduce his poem) combines the urban and the medieval in his poems. There is a strong sense everywhere of history and liturgy, creating a mysterious resonance. In 'Man Praying, King's Cross, 34°' I believe that he has also captured the darkness and mystery of London, its events and memories which go both forward and backward in history. Martinez de las Rivas said of this poem that it was inspired precisely by a man on his knees praying in the very middle of King's Cross, surrounded by a tide of people: "I found the stillness and concentration of his posture fascinating and unexpected in that place...In the following days, I began to think of the underground as underworld, and sketched out a sort of localised eschatology where this man's entrance into the underground would be akin to physical death." Once again, the Underground is both more than literal reality, and more than symbol.
The poem is also ambiguous. What is the man praying for? Is it something benign, or something terrible? When he sees "everything burning like/hellfire, beautiful", it is at the very least sinister. There is a sense that the heat could cause madness or violence. Martinez de las Rivas said that this poem was written a year or two before 7/7, and that in retrospect it felt like a "forward memory"; the bombers set out on their short deadly journeys from King's Cross. I also thought of the terrible King's Cross fire of 1987, which killed 31 people. Its cause is still something of a mystery.
The uttering of the station names at the end of this powerful poem - "Bermondsey, Angel, Deptford" - is like ritual words in a prayer or an incantation. London's names and places have a great deal of symbolic power, and like Peter Ackroyd, I suspect that the city's nature is primarily dark.

Posted by Clarissa Aykroyd at 21:09