"There, A Feeling": Coming Home to Paul Celan 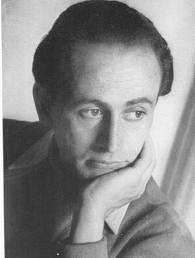 The above link will take you through to 'Homecoming' on the Poetry Foundation website (http://www.poetryfoundation.org/), as well as other information about Celan and more of his poems.

Writing about Paul Celan is difficult without sounding either trite or pretentious. It is important to know that he was a Jew, born in 1920 in a German-speaking enclave of Romania; that his parents were deported while he was away from home and that they died in the Holocaust. He spent time in labour camps himself. After the war he lived mainly in Paris, until his suicide by drowning in the Seine in 1970.

These are the very barest facts of his life. They can explain the guilt over his parents’ death and the anguish that haunted him, as well as his preoccupation with the fate of the Jewish people. However, I believe that his work is unique in the highly personal nature of its symbols, which translate mysteriously into something potentially universal.

My introduction to Celan was typical for me; in art, one thing always leads to another. I first read him when I was 17 or 18. I was a huge U2 fan at the time and one of my favourite songs was ‘A Sort of Homecoming’, from their beautiful early-80s album The Unforgettable Fire. Reading a book which described the stories behind U2’s songs, I discovered that “Poetry is a sort of homecoming” was a phrase taken from the poet Paul Celan, and that Bono had been reading his poems when he wrote that song.

I was curious enough to look for Celan in my university library. My memories of that early encounter are not very distinct, but I was definitely a bit puzzled. Among others, I read the famous ‘Death Fugue’ and was struck by its power. Obviously, I associated ‘Homecoming’ with the U2 song, although I didn’t realise for years that “Poetry is a sort of homecoming” was taken from Celan’s Meridian speech. I immediately realised that some of the images (the snow and the white flag, especially) echoed the imagery used by U2 in their lyrics, videos and artwork.

At some later point I bought Michael Hamburger’s translations. From time to time over the years I read some of the poems, but found most of them extremely difficult to grasp. Last year I started reading Celan again more in-depth, around when I went to a performance in London by the Michael Nyman Band of Nyman’s bleak settings of some of the poems. As the occasion was an anniversary of Celan’s birth, there were also readings and discussions of his poetry, by guests including A S Byatt.

I decided that this was the moment to explore Celan more deeply. Gradually I realised that the way to gain a better understanding of his work was to learn a little more about his life and his approach to poetry, and simply to sit with the poems and read them a great deal. It sounds facile, but once I had been reading more of the poems for a while, they started to make a lot more sense.

Certain images recur in Celan: the rose, the eye, hands, fragmentation, crystals, plants...a strange collection. When I read him I see images in my mind: green plants wreathing a doorway, white waves on a white beach, a beam of light broken up by turning blades. A childhood dream-thought of a star shining behind my wall now makes me think of Celan. Particularly with his later poems, the temptation is to call them “hermetic”; sealed, impossible for an outsider to understand. Celan loathed the term “hermetic” to describe his poetry. He called his poems “messages in a bottle”. While there was a meaning specific to him, anyone could discover their own personal meaning in them. I believe that it is the kind of art which gives a glimpse of varieties of experience. We know that certain images were specific to Celan’s experience. We also know that the reader relates the images to his or her own experience and finds personal meaning in them. Finally, certain images act as an unconscious trigger for certain feelings, which may seem completely unrelated in literal terms to the imagery. I am not sure yet if these are universal feelings or if they are very personal for each individual reader. However, this process is what I think of when he writes in ‘Homecoming’:

There: a feeling,
blown across by the ice wind
attaching its dove- its snow-
coloured cloth as a flag.

In our mind’s eye we see the snow, and the flag; we also feel something which is related but separate. To me, this is a poem about dislocation and the search for identity, but I can imagine that Celan may have been thinking of something else – or exactly the same thing – and different readers may have a different – or identical – experience.

There is a lot of distress and confusion in Celan’s poems. He sounds as though he is stammering. Words are broken and reformed unexpectedly. Along with the anguish there is hope, invoking images of growth, upward movement and birth. In one of my favourite poems, ‘In Prague’, he describes a violent and transcendent death and rebirth specifically associated with his Jewish identity:

I wish that I could say something particularly illuminating about Celan, but I realise that I still have a very long way to go. George Steiner wrote in a review of Michael Hamburger’s translations of Celan: “Let him enter your life. At risk. Knowing that he will change it.” This is not an exaggeration. Celan’s work is truly unique, and the reader who takes the long gradual journey into the Celanworld will find that their way of seeing has been altered forever.
Posted by Clarissa Aykroyd at 22:20