Ted Hughes's 'The Thought Fox': The Wild Comes To My Doorstep 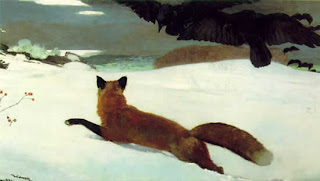 We've established that London is the greatest city in the world (a friend agreed with me the other day that it's best compared to addictive and illegal substances, but that's another story.) However, it does have its downsides, one of which is that London dwellers tend to feel cut off from nature. The parks are magnificent, but unless you manage to spend a lot of time in Richmond Park - and I have still only been there once - you are likely to see a little less greenery than you should, and a lot less animal life. On my way to work on the Victoria line the other day, I met two delightful floppy-eared individuals - some kind of spaniel. I gave one of them the tiniest scratch behind the ears and was instantly confronted with swooning brown eyes and a full body lean against my legs. It was lovely and I felt a bit sad when I had to get off at Victoria. It says something when even a tiny bit of animal contact makes my day.

As always, though, London will mysteriously place something that you really need right on your doorstep. I lived in West London for five years and occasionally heard the rather terrifying scream of a fox somewhere outside my window, but that and one brief glimpse of a fox heading purposefully somewhere one morning was about it for me. Now I live in inner-city South London, and one of the most wonderful surprises of my new neighbourhood has been the regular fox sightings.

I don't know how many there are near my building, but there have to be more than just a couple. Certainly, I have seen two at a time on more than one occasion, and I am sure there are more. I always see them in the late evening, when I'm hurrying home from somewhere or other. I hope to see them and often I get a strong sense that I will see a fox - then it crosses my path, sometimes only a couple of metres away. I am sure it is confirmation bias, but it does seem occasionally as though I just know and they just know.

I have been an animal lover for a very long time and foxes have a special place in my heart for a few reasons. The sandy-whiskered gentleman of Beatrix Potter's Jemima Puddleduck gave me the creeps when I was small. A favourite book by Garry Kilworth called Hunter's Moon, in the vein of Watership Down, created a fascination in me for urban foxes. Now I have them living only a stone's throw away. On the night of the worst August riots in London, I was leaning out my window looking at the smoke rising from Clapham Junction, and saw a fox trotting calmly across the street in my eerily quiet area. It was strangely reassuring. When I see them as I walk home at night, they usually pause and give me a long look: something like "you move first - I was here before you." They are wild, bold and indifferent and it always gives me a thrill.

Ted Hughes's nature poetry is incomparable. Many or even most of his poems touch on animal life and the wild in some way. He seems to have had an instinctive understanding of how wild animals live their lives with innate purpose, separate from humans, unaffected by them in the normal scheme of things, but giving them delight. He also understood how memories of the wild can restore hope and energy in the sometimes soul-sapping urban environment. Other poets have recognised this: in 'The Lake Isle of Innisfree', W B Yeats wrote:


I will arise and go now, for always night and day
I hear lake water lapping with low sounds by the shore;
While I stand on the roadway, or on the pavements gray,
I hear it in the deep heart's core.


Ted Hughes, however, went one better than this in his monumental poem 'The Horses':


In din of crowded streets, going among the years, the faces,
May I still meet my memory in so lonely a place
Between the streams and the red clouds, hearing the curlews,
Hearing the horizons endure.


'The Thought Fox' is a poem about the creative process: the mystery of it and the poem's inception from a combination of patience and inspiration. But it is also a poem about a fox; appropriately, a very beautiful and sly poem. The delicate animal movement of the fox, its precision and sensory perfection, comes across marvellously in the lines:

Sets neat prints into the snow...


The fox is "concentratedly/Coming about its own business", which is in this case also the poet's business of writing a poem. This is a wonderful description of the intent nature of the wild animal, its lack of interest in anything except the instincts which drive it - rather like the instincts of an artist caught up in creation.

Posted by Clarissa Aykroyd at 21:24