Coleridge's 'Kubla Khan': Canada, Van Halen, Cairo and All Between 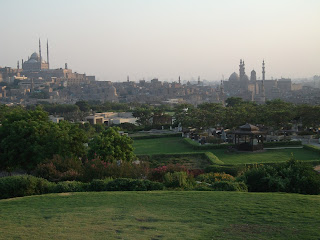 In Xanadu did Kubla Khan
A stately pleasure-dome decree:
Where Alph, the sacred river, ran
Through caverns measureless to man
Down to a sunless sea.
So twice five miles of fertile ground
With walls and towers were girdled round:
And there were gardens bright with sinuous rills,
Where blossomed many an incense-bearing tree;
And here were forests ancient as the hills,
Enfolding sunny spots of greenery.

But oh! that deep romantic chasm which slanted
Down the green hill athwart a cedarn cover!
A savage place! as holy and enchanted
As e'er beneath a waning moon was haunted
By woman wailing for her demon-lover!
And from this chasm, with ceaseless turmoil seething,
As if this earth in fast thick pants were breathing,
A mighty fountain momently was forced:
Amid whose swift half-intermitted burst
Huge fragments vaulted like rebounding hail,
Or chaffy grain beneath the thresher's flail:
And 'mid these dancing rocks at once and ever
It flung up momently the sacred river.
Five miles meandering with a mazy motion
Through wood and dale the sacred river ran,
Then reached the caverns measureless to man,
And sank in tumult to a lifeless ocean:
And 'mid this tumult Kubla heard from far
Ancestral voices prophesying war!
The shadow of the dome of pleasure
Floated midway on the waves;
Where was heard the mingled measure
From the fountain and the caves.
It was a miracle of rare device,
A sunny pleasure-dome with caves of ice!

A damsel with a dulcimer
In a vision once I saw:
It was an Abyssinian maid,
And on her dulcimer she played,
Singing of Mount Abora.
Could I revive within me
Her symphony and song,
To such a deep delight 'twould win me
That with music loud and long
I would build that dome in air,
That sunny dome! those caves of ice!
And all who heard should see them there,
And all should cry, Beware! Beware!
His flashing eyes, his floating hair!
Weave a circle round him thrice,
And close your eyes with holy dread,
For he on honey-dew hath fed
And drunk the milk of Paradise.


'Kubla Khan' is perhaps the ultimate poem which has intertwined with at least fifteen or twenty years of my existence. Perhaps it has been with me for so long that I can't remember how it came into my life. I am nearly certain that my brother introduced it to me, perhaps while studying it in high school (or when he started university? But I think it was earlier than that.) As well as a writer and student of literature, he also happens to be an expert on Van Halen. One of their songs was (at least partly) inspired by this poem, although I think it is about the pitfalls of fame. Perhaps that was Kubla's problem.


My brother and I always found the "damsel with a dulcimer" sequence a bit disappointing compared to what had gone before, even though the portrait of the insane guy was appealing. However, the poem certainly stimulated my interest in poetry, and it confirmed Coleridge as my favourite Romantic poet, if not one of my favourite poets. I never did like Wordsworth, but I am slowly coming round to him.

I knew the poem off by heart for years. I can still recite most of it at least, though there are a few bits in the middle where I tend to get stuck. I have recited it as an assignment in my grade eleven Drama class, and in al-Azhar Park in Cairo (see the above picture - it felt incredibly appropriate for the setting). My parents also bought me a psychedelic pop-up version by Nick Bantock, author of the then very trendy Griffin and Sabine. A lot of memories - some which make me smile, some with an element of loss involved.

Posted by Clarissa Aykroyd at 17:42