'The Underground': Seamus Heaney Goes to the Realms Below 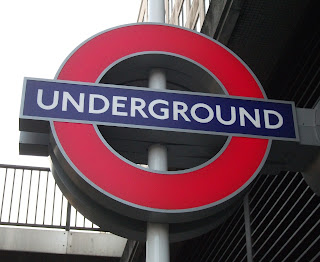 The BBC is currently showing a documentary called The Tube, which in my opinion knocks most "reality shows" into a cocked hat. It is, of course, about the London Underground.

I have already written a bit about the Underground's poetic implications in a previous entry, but I'm very much afraid to say that my thoughts, feelings and opinions on the world under London are endless. Normal people either hate the Underground from day one of their time in London, or they come to hate it pretty soon. Sometimes I hate it. The words "signal failure" fill me with a weird combination of resignation and fury. There are times when I feel that I simply cannot face the District line on the way home, especially on the chance that I will not be able to sit down. I moan about it as much as any Londoner.

And yet, and yet...the Underground continues to fascinate me - sometimes in the way that a snake fascinates a rabbit before killing it, and sometimes with simple delight, and sometimes through pure metaphor. Although I feel that the theme music is far too jolly and straightforward, The Tube show has captured a lot of this. I am partly thrilled and partly horrified to realise just how many of the stations and employees who have wandered through the show are familiar to me. I lived near Warwick Avenue, on the Bakerloo line, for several years, and enjoyed the presence of the legendary Tim Pinn during that time. Tim is deservedly legendary: he manages to maintain a sincere smile and pleasant banter in the face of grumpy commuters every day, and his message board writeups were consistently classic. There is at least one Facebook page dedicated to him. More recently, there is the guy at Victoria station who urges us to "chill out, enjoy time with family and friends, don't let no one cramp your style, and mind the closing doors." These employees have featured on the show, and I am sure that there are a few others who have been familiar. I love how the employees and Londoners interviewed somehow become larger than life. Many of the employees seem to have become philosophical. One says "People act like animals at Leicester Square on the weekend, but I'm religious, so it doesn't affect me much." Another says "We're not meant to live in cities like this. London can be very hard especially if you have an illness or have suffered a bereavement." Others rhapsodize about the overground portions of the Central line, or declare a basic faith in humanity despite it all. You get a glimpse of important aspects of their personalities, surprisingly quickly.

Since living in London, I have worked in the West End, Hammersmith, Ealing, the City, Pimlico, and Barons Court (am I missing somewhere?). I previously lived in west London and now live south of the river, also spending a good deal of time around the southern reaches of the Victoria and Northern lines. So there are not many Underground lines that I have not used regularly or semi-regularly, at least for a few months or years. The Tube shows a lot of what goes on behind the scenes, of course. Some of it is distressing. I didn't watch all of the episode which dealt in some details with the "one unders", or people who commit suicide by jumping under trains (although sometimes it is accident or occasionally malicious action, as well, and a large percentage survive.) I find it very upsetting to hear the "person under a train" announcements, so I was reluctant to expose myself to too much detail on the subject. Shortly after that episode, I walked past the station in Hammersmith one day just when it had been closed for that very reason, and the ambulances and police cars were congregating outside - that brought it home, for sure. But much of the behind-the-scenes action is simply fascinating or amusing. The detective work done by the employees responsible for tracking down fare evaders; the good nature and tolerance in the face of thousands of more or less intoxicated revellers at the Notting Hill Carnival; the falconer who brings his bird to sort out the pigeon-ridden stations...the list goes on.

Time, space and social norms all seem to operate a bit differently down there. I am not terribly sensitive to my physical surroundings, so I can often just zone out, watch people and listen to Queensrÿche so loudly on my earphones that heads turn. For many people, however - and at least occasionally for me - it seems that getting on the Tube is something like this painting by the great Finnish painter Akseli Gallen-Kallela about crossing the river to the underworld: 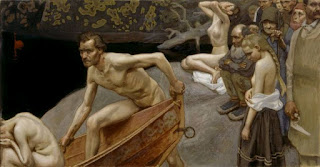 Everyone has got at least a handful of weird Tube stories, or if they don't, they probably haven't reached "true Londoner" status yet. My crazy French friend asked a bemused Englishman if a Northern line train "went magically to Waterloo". No, but if you change at Kennington, the unicorns and Care Bears will help you out! One night I got onto a train, sat down, and noticed that a guy with a large camera was looking at me a shade too intently. He then ostentatiously waved his camera about, pointing it at the ceiling in a "this lens is being a bit funny" manner, and finally not-so-subtly took at least six pictures of me. I wasn't sure whether to shout "You pervert!" and smash the camera, or whether to nervously pretend I'd noticed nothing and wonder where the heck those pictures were going to end up. (I chose the latter.) There is generally a parade of weird and funny announcements, and odd or strikingly handsome characters, who have marched through my hours on the Tube.

I really want to write a whole series of poems about the Underground. I wrote one which I felt came out quite well, except that it rather surprisingly turned out to be about an invisible rainforest, as well as the Northern line. The thing is, in the metaphoric world of the Underground, this all makes sense.


Seamus Heaney's 'The Underground' is one of my favourite poems by Heaney, out of a field of many to choose from. He has commented that it reflects his love for London and his gratitude for the inspiration and gifts that the city and its people have given him. It is about a night on his honeymoon when he and his wife went to the Proms at the Royal Albert Hall, near the South Kensington tube station. (Some people do go to London on their honeymoon; I personally know at least one couple who did.)

It is so appropriate that he evokes the myths of Pan and Syrinx ('And me, me then like a fleet god gaining/Upon you before you turned to a reed"), and Orpheus and Eurydice ("all attention/For your step following and damned if I look back"), as well as the fairy tale of Hansel and Gretel. These are the kinds of stories and images that the Underground brings up within us. It is one of the mysteries of London.

Posted by Clarissa Aykroyd at 23:52