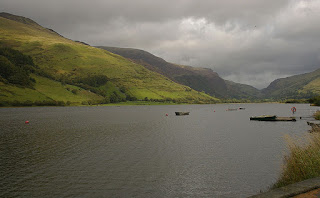 
No one knows the nature of water.
I was never so close before.
It is created through contact
with the eye. There was nothing
beneath the slope, until the curve. Now
my eyes ache with the strain
of water's presence. The lake
is blowing away to a gap in the sky.

The surface is almost ready
to be walked on. Soon
I will know the way. Above
sky dissolves to air. Steam rises
from the cold conjunction.

The lake is waiting patiently
to be created. Waiting
for silver light to liquefy,
for the mountains to unfold their revelation.
For the touch of an eye.


© Clarissa Aykroyd, 2012. Not to be reproduced without permission.


I wrote this poem almost ten years ago, in August 2002 (although this is a recently and very slightly tweaked version). This was just after I moved to Dublin, and also just after a trip of a few weeks in Wales. I spent a week at the International Arthurian Society conference in Bangor, and then about ten days travelling in Snowdonia, from Caernarvon down to Aberystwyth.

I can't believe that ten years of my life have gone by since I left Canada. It has gone by very quickly. Anniversaries - good and bad - tend to be a big deal for me, so I am preparing for a lot of soul-searching in July, when it will be ten years since I moved to Dublin, and seven years since I moved to London. Or perhaps I should just have my crisis now. (I had an early crisis when I turned 30, for example - about six months before the fact - and that worked quite well.)

My trip to Wales still holds a very special place in my heart. I keep meaning to go back, but I almost wonder if I should just leave it there, pristine and exciting and amazingly beautiful. The IAS conference was great fun, though I was well out of my depth - most of the people there were professors or well on their way, but what touched me was that they were delighted to have someone who was more of a novice in their midst. Then I travelled for ten days around Snowdonia, more or less on my own, and fell quite hopelessly in love with the place. I stayed with my relatives' friends in a centuries-old house up in the hills near Mount Snowdon; I remember a feeling of delighted shock at how beautiful and ancient it all was, when I walked out in the morning. I walked in the footsteps of Susan Cooper's characters from her great The Dark Is Rising series, which is how I came to Tal-y-llyn Lake. It was exactly as described:


His aunt had called it the loveliest lake in Wales, but lying dark there in the grey morning, it was more sinister than lovely. On its black still surface not a ripple stirred. It filled the valley floor. Above it reared the first slopes of Cader Idris, the mountain of the Grey King, and beyond, at the far end of the valley, a pass led through the hills - away, Will felt, towards the end of the world. (from The Grey King, Susan Cooper)


Those books also led me to the Bearded Lake above Aberdovey, and other locations. There are few things in travel that I love so much as seeing places in books, so it was pretty wonderful. I also tracked down other locations from Arthurian legend, and walked a mile up a hillside in the rain to get a glimpse of Bron-yr-Aur, where Led Zeppelin worked on their third album. The culmination of the trip was my trek up Mount Snowdon by the Watkin Path - one of the most difficult routes - with two lovely Israeli guys I met in the hostel. I am more of a city girl than a nature girl, and I'm not much of an athlete, but that day I felt like I had summitted Everest.

After that trip I settled into a life in Dublin, and everything became progressively more complicated, as a life does when you build it anywhere. London has been complicated, too. Perhaps my memories of Wales are so shining partly because it was a moment caught in a glass bubble - in between Canada and Ireland. It will always be there, ten years ago, and it will never stop being perfect.
Posted by Clarissa Aykroyd at 00:16