'The Darkling Thrush': Or, How I Learned to Stop Worrying and Love Thomas Hardy 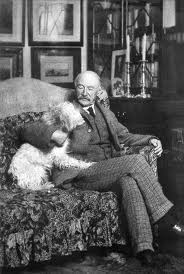 
I leant upon a coppice gate
When Frost was spectre-grey,
And Winter's dregs made desolate
The weakening eye of day.
The tangled bine-stems scored the sky
Like strings of broken lyres,
And all mankind that haunted nigh
Had sought their household fires.

The land's sharp features seemed to be
The Century's corpse outleant,
His crypt the cloudy canopy,
The wind his death-lament.
The ancient pulse of germ and birth
Was shrunken hard and dry,
And every spirit upon earth
Seemed fervourless as I.

At once a voice arose among
The bleak twigs overhead
In a full-hearted evensong
Of joy illimited;
An aged thrush, frail, gaunt and small,
In blast-beruffled plume,
Had chosen thus to fling his soul
Upon the growing gloom.

So little cause for carolings
Of such ecstatic sound
Was written on terrestrial things
Afar or nigh around,
That I could think there trembled through
His happy good-night air
Some blessed Hope, whereof he knew
And I was unaware.


It is snowing in London again, and no doubt even more in other counties and countries. I had thought of posting some snowy poem to go along with the cold weather. Although this is not quite a snowy poem, it is at least wintry and beautiful. It was first published at the turn of the nineteenth century, and so it is usually reprinted as a New Year (or Old Year) poem - I noticed that several poetry blogs reproduced it around the end of the year.

I have a sad Thomas Hardy tale to tell. When I was no more than about twelve years old, my brother cruelly handed me Jude the Obscure and told me to read it. He wasn't normally a cruel brother, so I think that he may actually have wanted to share a book with me that he had enjoyed (or at least, there were definitely some passages in it that he had found funny.) Somehow I read it from cover to cover. And I hated it. I hated it so much that there were no words for my hatred. I found it boring, depressing, stupid, and...stupid. I cited it as my most hated book for many years. I was thoroughly Hardy-complexed and didn't want to look at another word he had written.

I think that I read 'The Darkling Thrush' when I was 16 or 17. I may even have studied it in grade 12, though I am not sure about that. It was certainly the poem that opened Hardy up to me again. I still didn't want to look at his prose, despite tentative suggestions that the likes of Far From the Madding Crowd might be just the thing to cure my malaise. I didn't want to know. But the poem was wonderful. Pessimistic, yes - but amazingly evocative and beautiful. I can see the bleak grey-brown landscape, hear the thrush's brave and glorious song, and feel the poet trying so hard to find some optimism against all his inclinations.

I encountered more of Hardy's poems in university - 'The Convergence of the Twain', 'During Wind and Rain', 'The Sunshade' - and either loved or liked all of them. I filed Hardy strictly under "awesome poetry, dire prose" for many, many years. Only about two years ago, I finally made myself read Tess of the d'Urbervilles. I had to acknowledge that it was engrossing and brilliantly written, but it was also highly melodramatic, and I loathed every single character, for different reasons. So my feelings about Hardy's prose are still mixed. But I love the poetry, and this poem in particular.

Posted by Clarissa Aykroyd at 21:24