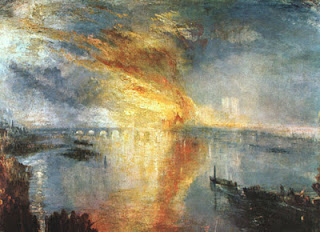 On Saturday I went to a poetry workshop on "Megacities and the Grotesque", led by poet and performance artist Siddhartha Bose. I think the most valuable thing that I took away from it for my own writing was how to work on speaking through the voices of others, something I haven't done very much. I might yet get something from the beggar in Hammersmith who snarls at everyone and recently called me a "#&%* posh girl". We spent a good deal of time discussing London and its possibilities; read New York poems by Lorca, Whitman and Walcott; and Siddhartha read to us from his shambolic beatbox of a poem, 'Shoreditch Serenade'.

Cities tend to inspire me when I write poetry myself. I've written quite a few poems about different aspects of London, and when I travel to other cities they often inspire some work. I've found that my poems tend to start out being about a place or a city, and later become a meditation on something I'm preoccupied with or struggling with. This is the city as mirror - Derek Walcott has done this quite wonderfully. Much as World War II bombs and Roman ruins sometimes come to light in the City of London during roadworks and the like, different cities uncover different aspects of my self.

We were asked if possible to bring city poems to read. One of the ones that I read was 'The Night City' by W S Graham, which can be found on this link:

I first read this poem some months ago and loved it right away. It instantly spoke to so much of what fascinates me about London, and it reminded me of my own first visit. I was 17 or 18 and travelling with my parents and brother. London had been an essential part of my mental and emotional landscape for years, and I was especially obsessed with Sherlock Holmes at the time (still am) and wanted to walk in his footsteps. London was everything I wanted, and when I arrived there in the flesh, I found that it was still everything I wanted. I'd probably dreamed about moving there even before that, but visiting the city solidified that dream. I later wrote a poem about that first afternoon, being overwhelmed by the sight of one great monument after another, and simply by being there. I remember that it contained the line about standing on Trafalgar Square, staring around awestruck: "Completion. This is it."

Graham arrives in the midst of a Turner painting (the above painting is Turner's depiction of the Houses of Parliament on fire - he didn't paint London a great deal.)


Unmet at Euston in a dream
Of London under Turner's steam


London is his "golden city", where he meets T S Eliot, and Holmes, and John Donne, and others. (Graham actually did meet Eliot in London - Eliot championed his poems and Faber became Graham's publisher.) I had to look up Paul Potts - interestingly, he was a modern poet who came originally from British Columbia, my home province. He wandered the dark streets of Soho, not bathing nearly often enough. I have not tracked down any of his poems yet, but would like to. It seems that both London and Canada claim him.

The poem stops on a dark, quiet note. The City is always empty when its workers have gone home. The speaker is still surrounded by the echoes of history and literature - the Great Fire, the Plague - and finds himself "In the stopped works of a watch"; both in time, and out of it. This is a feeling that I frequently have in London.

It is often good to be pushed out of your comfort zone by literature and art, but I admit that this poem is very much one of "my poems"; it describes my vision of London. I have always seen places, and London particularly, through the lens of literature and art. I think that this is my way of both participating and protecting myself. London, as well as being Unreal City and a literary dreamland, is also harsh and tough and violent. I keep my eyes open for the threatening elements, but imagining that I am in a book or a poem - that carries me through, in so many ways.

Posted by Clarissa Aykroyd at 16:34