Kenneth Grahame's The Wind in the Willows: Evoking a Pastoral England 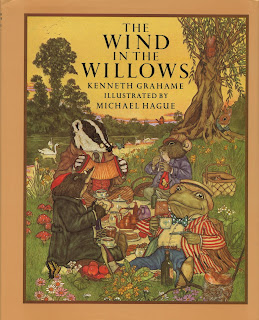 from THE WIND IN THE WILLOWS (Kenneth Grahame)


Poor Ratty did his best, by degrees, to explain things; but how could he put into cold words what had mostly been suggestion? How recall, for another's benefit, the haunting sea voices that had sung to him, how reproduce at second-hand the magic of the Seafarer's hundred reminiscences? Even to himself, now the spell was broken and the glamour gone, he found it difficult to account for what had seemed, some hours ago, the inevitable and only thing. It is not surprising, then, that he failed to convey to the Mole any clear idea of what he had been through that day.

To the Mole this much was plain: the fit, or attack, had passed away, and had left him sane again, though shaken and cast down by the reaction. But he seemed to have lost all interest for the time in the things that went to make up his daily life, as well as in all pleasant forecastings of the altered days and doings that the changing season was surely bringing.

Casually, then, and with seeming indifference, the Mole turned his talk to the harvest that was being gathered in, the towering wagons and their straining teams, the growing ricks, and the large moon rising over bare acres dotted with sheaves. He talked of the reddening apples around, of the browning nuts, of jams and preserves and the distilling of cordials; till by easy stages such as these he reached midwinter, its hearty joys and its snug home life, and then he became simply lyrical.

By degrees the Rat began to sit up and to join in. His dull eye brightened, and he lost some of his listening air.

Presently the tactful Mole slipped away and returned with a pencil and a few half-sheets of paper, which he placed on the table at his friend's elbow.

`It's quite a long time since you did any poetry,' he remarked. `You might have a try at it this evening, instead of -- well, brooding over things so much. I've an idea that you'll feel a lot better when you've got something jotted down -- if it's only just the rhymes.'


The Rat pushed the paper away from him wearily, but the discreet Mole took occasion to leave the room, and when he peeped in again some time later, the Rat was absorbed and deaf to the world; alternately scribbling and sucking the top of his pencil. It is true that he sucked a good deal more than he scribbled; but it was joy to the Mole to know that the cure had at least begun.


Kenneth Grahame's The Wind in the Willows is, to me, one of the greatest works of English literature ever published - and not just among those written for children. Published in 1908, it evokes the classic elements of an England that now only exists in out-of-the-way places and brief glimpses; an England of rowboats, riverbank picnics, dark forests, wealthy eccentrics, and a faint mysticism of panpipes and mythological gods.

My parents bought me the edition of The Wind in the Willows pictured above, and I have very happy memories of my father reading it to me as a child. It was one of the books that made me dream of England, though I've found my way much closer to the England (or London, really) of Sherlock Holmes than the England of Mole, Ratty, Badger and Toad.

In the above passage, Ratty has almost been seduced away from his riverside home by the hypnotic descriptions of a seafaring, world-wandering Sea Rat. I love how the Mole - a very practical sort - brings him back to reality by lovingly describing the details of the English countryside, and then by handing him some writing elements and encouraging him to get back to writing poetry. The bohemian Rat and the down-to-earth Mole have a bit of a Holmes-Watson partnership going on, which I think was picked up on even by some of the illustrators. I'm not aware that Holmes ever wrote poetry - it seems a bit out of character - but he did quote it from time to time.

It has been a long time since I have really read this book. I should return to it soon, and perhaps venture out into the countryside again, where I will remember that I live in a Wind in the Willows England as well as a Holmes England.