Sylvia Plath and 'Ariel': "And I Am the Arrow" 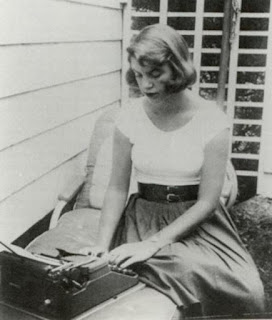 49 years ago, on 11 February 1963, poet Sylvia Plath was found dead in her London flat. It had previously been the home of W B Yeats, which had pleased Plath when she moved in a few months earlier. The circumstances of her suicide at the age of 30 are well known. Her marriage to Ted Hughes had come to a painful end, she was suffering from severe depression, living alone with their two small children, and it was one of the coldest winters on record in the UK.

I had not read much of Plath until very recently, or at least not while paying much attention. 'Daddy' and 'Lady Lazarus' had popped up from time to time over the years, as they are considered such iconic poems, and I didn't care for either of them. Especially 'Daddy'. I didn't understand Plath's fixation on Holocaust themes and her demonizing of a dead father who was not actually a Nazi. I just found it tedious, melodramatic, and unpleasant.

I think I may have had a bit of an early reaction against Sylvia Plath because of the ever-present suggestion that, as a girl and now as a woman, I should love her work and should not enjoy Ted Hughes's, because of their terrible history. Perhaps it was more than a suggestion; I may have had a faint niggling feeling that I was letting down the side by preferring Hughes to Plath. Apparently this is one of those literary areas where you are supposed to pick a side. I've enjoyed Hughes's poetry for years - though not all of it, by a long shot - and just could not be bothered to come back to Plath. To be honest, because of the trappings and because of my own teenage experiences, she made me think of extreme political correctness and a particular brand of feminism.

I grew up on the West Coast of Canada, one of the most politically correct regions of an extremely politically correct country, and in my late teens I attended what may very well be the most politically correct university in the world. As fond as I am of my university and as good as my experiences there generally were, I don't count it as a plus that they had an "ombudsperson" rather than an ombudsman, and that my brother was once told by the university paper that the CD review he'd written was excellent but that the word "craftsmanlike" had to be replaced by "craftspersonlike". (Every European who I've shared this story with has laughed in disbelief, which is interesting in itself. To be fair, some people from other parts of Canada have laughed, too.) Gender-specific language? Tut tut.

I was left with an impression of this type of feminism as a question of PC gone crazy, of semantics, of the inevitable person in every class who would rant on about the patriarchy, phallic symbols and oppression. I don't happen to believe that any of this is useful and that making silly changes to words is going to make a difference to people's attitudes. I have never understood what good it does to characterize 50% of the human race as cruel and oppressive due to their gender, when it would be better to address the questions of why human beings generally have a hard time treating each other decently, honestly and respectfully, and why so many people (a majority being men, throughout history - but both genders are implicated) are obsessed with seeking out an imbalance of power and abusing it. Surely equal, healthy and happy relationships (of any kind) are more desirable than just telling men why they are wrong.

To a certain extent, I understand why Plath was adopted as a feminist icon. She had a disastrous relationship with a man whose subsequent lover also eventually committed suicide, and who ultimately became a poster boy for male oppressiveness. I may not be a big fan of 'Daddy', but its rage and power is undeniable. Many of her poems bristle with anger and pain and the agonizing desire to be heard, to have a voice. But I doubt that she considered herself a feminist, or purely one, as some seem to want to characterize her. Not everything in her poetry is about fighting against male dominance, or about rejecting the roles imposed upon her. She was also suffering from mental illness, in a very debilitating manner, and this was the case even before she met Hughes. The language of her poems invests the world around her with hostility and agony. Colours and sounds seem to trouble her greatly, and there is a traumatized focus on physical details in so many of her poems. This is an area which I find interesting (although painful), more so than the feminist angle.


The tulips are too red in the first place, they hurt me.
Even through the gift paper I could hear them breathe
Lightly, through their white swaddlings, like an awful baby.
Their redness talks to my wound, it corresponds.


The moon is no door. It is a face in its own right,
White as a knuckle and terribly upset.
It drags the sea after it like a dark crime; it is quiet
With the O-gape of complete despair.

(from 'The Moon and the Yew Tree')


Sylvia Plath was a woman and person in her own right, not just a woman whose life went very wrong in large part because of a man. It doesn't seem fair to imply that she would have had nothing to write about had Ted Hughes (or another man) not treated her badly, or had she not been raised as a traditional American girl and found herself caught between conflicting impulses and attitudes as a creative woman and a strong personality at a time when societal attitudes were shifting. I think that she was more talented than her circumstances.

I decided to start reading Plath more closely because of a recent encounter with the poem 'Ariel', which can be found on this link:

At least in its most literal sense, the poem is about Plath riding her horse Ariel. It is a rush of giddy images, of exaggerated sensual details which work perfectly in the context of the poem. It is about pure feeling moving to something on a more transcendent level - release from physical constraints and mental or emotional burdens. Poet and critic A Alvarez, who was also friends with Sylvia Plath, commented: "You are made to feel the horse's physical presence, but not to see it. The detail is all inward. It is as though the horse itself were an emotional state." To me, despite its somewhat catastrophic imagery, this is a rare example in Plath's poetry of the physical world being invested with something exultant and joyful, rather than anger and suffering.


And I
Am the arrow,

The dew that flies
Suicidal, at one with the drive
Into the red

Eye, the cauldron of morning.


I love this poem, and it is enough to make me want to explore Plath further. I have wondered why my literary preferences - certainly in the realm of poetry - seem to be heavily weighted toward male rather than female writers. The subjects of my blog posts so far are enough to reveal that - there have hardly been any women. I have yet to determine whether this is more than coincidence. Perhaps I really have just been brainwashed by the patriarchy and all those dead white guys. Perhaps I'm looking for the male perspective, given that I am a woman with a pretty good sense of my own identity (thus not feeling the need for a lot of help with female identity) and that the majority of my friends are female. Perhaps I prefer the male voice for some reason I have not identified (though the example of Ted Hughes is surely enough to make me look very cautiously at the whole Manly Man thing). Or perhaps it is just a numbers game, since until recently men have had a lot more opportunities - and in many areas this is still how it is. In any case, I feel that I have something to gain from reading Sylvia Plath.

Posted by Clarissa Aykroyd at 09:36