William McGonagall: Poetry So Bad It's Awesome, From the Knight of the White Elephant of Burmah 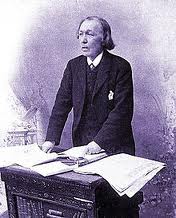 ’Twas in the month of December, and in the year 1883,
That a monster whale came to Dundee,
Resolved for a few days to sport and play,
And devour the small fishes in the silvery Tay.

So the monster whale did sport and play

Among the innocent little fishes in the beautiful Tay,
Until he was seen by some men one day,
And they resolved to catch him without delay.

When it came to be known a whale was seen in the Tay,

Some men began to talk and to say,
We must try and catch this monster of a whale,
So come on, brave boys, and never say fail.

Then the people together in crowds did run,

Resolved to capture the whale and to have some fun!
So small boats were launched on the silvery Tay,
While the monster of the deep did sport and play.

Oh! it was a most fearful and beautiful sight,

To see it lashing the water with its tail all its might,
And making the water ascend like a shower of hail,
With one lash of its ugly and mighty tail.

Then the water did descend on the men in the boats,

Which wet their trousers and also their coats;
But it only made them the more determined to catch the whale,
But the whale shook at them his tail.

Then the whale began to puff and to blow,

While the men and the boats after him did go,
Armed well with harpoons for the fray,
Which they fired at him without dismay.

And they laughed and grinned just like wild baboons,

While they fired at him their sharp harpoons:
But when struck with the harpoons he dived below,
Which filled his pursuers’ hearts with woe:

Because they guessed they had lost a prize,

Which caused the tears to well up in their eyes;
And in that their anticipations were only right,
Because he sped on to Stonehaven with all his might:

And was first seen by the crew of a Gourdon fishing boat,

Which they thought was a big coble upturned afloat;
But when they drew near they saw it was a whale,
So they resolved to tow it ashore without fail.

So they got a rope from each boat tied round his tail,

And landed their burden at Stonehaven without fail;
And when the people saw it their voices they did raise,
Declaring that the brave fishermen deserved great praise.

And my opinion is that God sent the whale in time of need,

No matter what other people may think or what is their creed;
I know fishermen in general are often very poor,
And God in His goodness sent it to drive poverty from their door.

So Mr John Wood has bought it for two hundred and twenty-six pound,

And has brought it to Dundee all safe and all sound;
Which measures 40 feet in length from the snout to the tail,
So I advise the people far and near to see it without fail.

Then hurrah! for the mighty monster whale,

Which has got 17 feet 4 inches from tip to tip of a tail!
Which can be seen for a sixpence or a shilling,
That is to say, if the people all are willing.

There are those in my life who feel that I spend too much time reading dark and depressing poetry. While I don't think that I really incline strongly toward the dark and depressing, it may simply be the case that a lot of the finest poetry ever written falls into those categories. But we all need a break occasionally, and there are days when Paul Celan and Sylvia Plath are just going to make things worse, despite their brilliance.

William McGonagall, a Scottish 19th-century poet, is impossible not to love. He appears to have been convinced that the muse of poetry had a serious thing for him, and he wrote and toured from his fifties onwards. He once walked fifty miles to see Queen Victoria and was turned away. He also took on the splendid title of "Sir William Topaz McGonagall, Knight of the White Elephant of Burmah", although it is likely that a prankster's hoax led him to think that he had really been awarded this probably fictitious honour.

His most famous poem is 'The Tay Bridge Disaster', and it is laugh-out-loud-worthy indeed, but I feel a little bad doing so as the Tay Bridge Disaster was actually a rather awful event resulting in a large loss of life. So instead I have posted 'The Famous Tay Whale', another classic about the Firth of Tay in Scotland.

McGonagall's clunking rhythms and his insistence on including statistics and utterly un-poetic language make him completely memorable and pretty wonderful. It's bad, but it's also terribly funny. I would rather read McGonagall than most poetry written with actual humorous intent.﻿
Posted by Clarissa Aykroyd at 23:23