Louis MacNeice's 'Entirely': Some Days You Just Want Art to Calm You Down 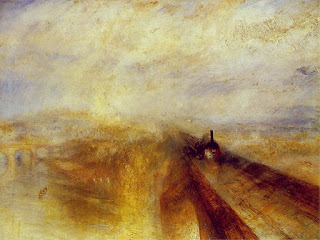 I finished work early today, and when my errands were done I found myself first at the National Portrait Gallery, wandering amidst the artists and politicians and explorers and looking for the Isaac Rosenberg self-portrait which I included in my last entry. It's in storage, but if it comes out I might see it some day. My eventual port of call was the Turners in the National Gallery - my feet often seem to lead me there. I had the obligatory conversation in front of Rain, Steam and Speed, above, about the hare running in front of the train. Some day I'll set off the alarm pointing it out. Although I have known about the hare for a long time (the NG kind of spells it out for you by mentioning it in the blurb), I always see something in that painting I haven't seen before.

I had Rosenberg's lines on my mind and felt a bit overwhelmed. There is something about a poem like 'Break of Day in the Trenches' which brings me to the overall experience from the very personal - that is, one man's perspective makes me think about all the individual experiences, which is a very large-scale tragedy. So I couldn't think about that for much longer. I finally found my way to this poem by Louis MacNeice, 'Entirely'.

I don't have a great deal to say about this poem, but I love its truthfulness, and how succintly memorable it is, and how practical. Poetry can be very practical, especially because of its capacity for extreme accuracy, and it strikes me that MacNeice was a practical sort except when he was entangled in disastrous relationships or alcoholism (which seems to have been a lot of the time.) He just says it like it is in this poem, but very elegantly. I'm not sure he and I would have entirely agreed that "in brute reality there is no/Road that is right entirely", but I know what he means. Human nature is such that almost everything has ambiguity attached to it, and something difficult will accompany even the best decision, and you'll never quite say what you wanted to say:


And when we try to eavesdrop on the great
Presences it is rarely
That by a stroke of luck we can appropriate
Even a phrase entirely.


I also like the fact that he acknowledges: "Or again we might be merely/Bored" if things were simpler. But the question is moot, as he points out, so he is not going to worry about it too much.

MacNeice's poems tend to calm me down, much as my favourite paintings tend to do. I always feel better (even if I was already feeling fantastic) when I've had time to wander through a gallery, like today. Often that is just what we need from art.
Posted by Clarissa Aykroyd at 22:35