William Carlos Williams' 'Heel & Toe to the End': Yuri Gagarin and the Idea of Space 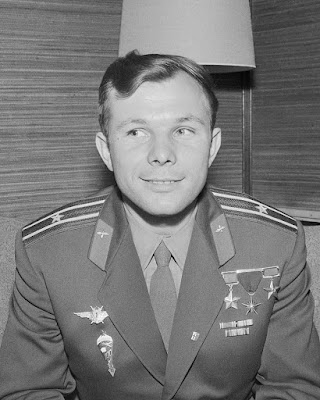 On 12 April 1961, the Soviet cosmonaut Yuri Gagarin completed one orbit of planet Earth in the capsule Vostok 1 and became the first human being in outer space.
I remember hearing about Gagarin when I was a very small child (ie. in the early 80s), not so much because anyone in my family was that obsessed with space travel, but probably because my parents thought it was good for kids to know things. I suspect that Gagarin was the first Russian who I ever knew about by name (with the possible exception of Tchaikovsky, one of my dad's favourite composers and now one of mine, who I may not have realised was Russian). I vaguely remember having a mental image of Gagarin as a severe-looking man with darker hair, sternly flying around planet Earth, an image I must have somehow picked up of what Russians looked like. At some later point it was surprising to see photos of a baby-faced young man with a slightly goofy smile.
Gagarin died in 1968 while flying a military jet, an ironic death given that Soviet officials had banned him from further space missions. He was a useful representative of the USSR and they had feared for his life after the death of Vladimir Komarov in the failed Soyuz 1 mission. Gagarin was only in his mid-30s at that point and his death ensured that he became a fully legendary figure, perhaps more of an idea now than a human being.
I watched the film Бумажный солдат (Paper Soldier, directed by Aleksei German, 2008) on the Klassiki film platform a couple of days ago. It was about the preparations for Gagarin's mission and the moral dilemmas faced by people involved, who knew that his death was very likely. The film depicted the accidental death of Valentin Bondarenko, another candidate for the Vostok 1 mission, who was burned in a fire in an oxygen-rich isolation chamber. I was quite shocked by the film; I'd never really thought about the realities of trying to get a man into space in the USSR in the 1960s, and everything depicted looked terrifyingly old-fashioned and precarious, as well as brutal in terms of the well-being of individuals. Gagarin came across as cheerful, committed and uninterested in thinking too much about the fact that he might die, which probably made him a perfect candidate. "He flew like an angel," said witnesses after the success of the mission.
In the context of the USSR, but of other nations as well, space travel seems to encompass a duality of something pure and unencumbered, but also an immensely useful tool of propaganda. Nations know that space flight looks idealistic but that it's also a display of power. I knew about Laika, the Soviet dog who was the first living creature in space and who died, and the story still upsets me and fills me with a profound loneliness. My perceptions of space exploration were also coloured as a small child by the Challenger disaster in 1986. When I look at it in a certain way, though, the feeling of purity still attaches.
I started thinking about poetry related to Gagarin when I noticed that his name shows up quite regularly in the Russian rock/pop music I've been listening to in recent months. When I asked for suggestions on Twitter, many people directed me to more poems and songs about Gagarin, in Russian, Ukrainian, English and other languages. I particularly liked this poem by William Carlos Williams, 'Heel & Toe to the End', which captures the sense of wonder: "he could have/gone on forever".
Here, too, is one of the Russian rock songs I've enjoyed in recent months, by the band Смысловые Галлюцинации ("Semantic Hallucinations"). The song's title 'Звёзды 3000' translates as 'Stars 3000' and is a reverie about what space means to us back on earth (well, that's what I got from it...). Gagarin is name-checked in this but I can't quite figure out the context, even from the dodgy translations I found online: if any Russian speaker can help me I'd appreciate it...
Photo: The Soviet cosmonaut Yuri Gagarin at a press conference during his visit to Finland, 1961. Arto Jousi/Suomen valokuvataiteen museo/Alma Media/Uuden Suomen kokelma; Restored by Adam Cuerden - Finnish Museum of Photography. Public domain.
Posted by Clarissa Aykroyd at 12:38 No comments:

Email ThisBlogThis!Share to TwitterShare to FacebookShare to Pinterest
Labels: Russia, William Carlos Williams, Yuri Gagarin
Newer Posts Older Posts Home
Subscribe to: Posts (Atom)
"The Stone and the Star simply IS poetry" (Anthony Wilson)
"The Stone and the Star constantly surprises with new discoveries and reminders of old favourites... Fast becoming a stalwart of the UK poetry blogging scene" (Matthew Stewart, Rogue Strands)
"Clarissa Aykroyd is doing an important thing: a poet writing about poetry, and with a spirit of awed enthusiasm" (Tim Buck, Spectral Lyre)
"Your life, with its immensity and fear,
...now bounded, now immeasurable,
it is alternately stone in you and star."
(from 'Evening', Rainer Maria Rilke,
translated by Stephen Mitchell)