Poetry and Beyond in the Czech Republic 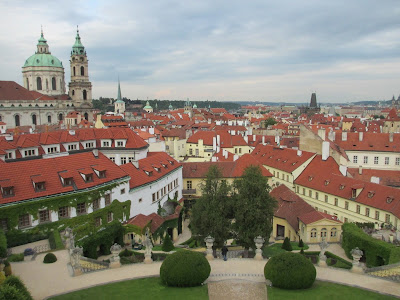 Prague, May 2015. All photos by Clarissa Aykroyd


A little over a month ago I was in Prague with my brother - we had almost a week together and also visited the nearby towns of Kutna Hora and Plzeň. It was my first time back in the Czech Republic after eleven years. In 2004 my brother was there working with the World Hockey Championships (er, that's 'ice hockey') and we were there for the same reasons again this year. So hockey was on the menu (including Canada slaughtering Russia 6-1 for the gold medal), as well as fairy-tale-like castles and Art Nouveau buildings, all the meat and dumplings I could eat, and even beer (which normally I never touch because I don't like the taste.)

Poetry is never off the menu, and that's especially so in a country like the Czech Republic. We had a tour one day with a man named Milos Curik, who turned out to be absolutely one of the most interesting people I have ever met. He showed us some beautiful and fascinating hidden corners of Prague, which was a good thing because as lovely as Wenceslas Square and Charles Bridge are, they are insanely rammed with tourists. Milos was part of the Beat generation and knew the American poetic icon Lawrence Ferlinghetti, as well as having met Allen Ginsberg and many others. He'd done everything in his life from organising Velvet Underground concerts in Czechoslovakia to studying funerary art - interspersed with many run-ins with the police during Prague's complex history - and he had evidently done it all with panache. Milos showed us a street where Ginsberg had stayed in Prague and told us about how Ginsberg had written the poem 'King of May' after being honoured as such by Czech students in 1965. (He wrote the poem on his flight from Prague to London.) Milos specialises in arts and music tours of Prague, and told us that later this year he will be showing around some poets on a tour of Prague taking in sights related to Seamus Heaney's visits to the city. (Heaney had very strong connections to Central and Eastern European poetry, and I came across this interesting article: http://radio.cz/en/section/books/a-certain-parallel-seamus-heaney-and-the-czechs)

Here are a couple of photos from that tour. The first is of that street where Ginsberg stayed, a semi-hidden but lovely area near the castle: 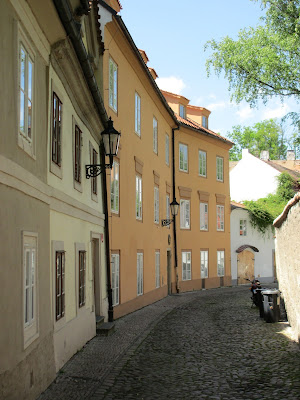 This is a table and chairs, attached to a tree, featuring a quotation from Vaclav Havel. There are a number of these in different cities now, known as 'Havel's Place'. Of course, Havel was one of the architects of the Velvet Revolution and was the first president after the fall of Communism, but he was also a playwright and, less famously, a poet. 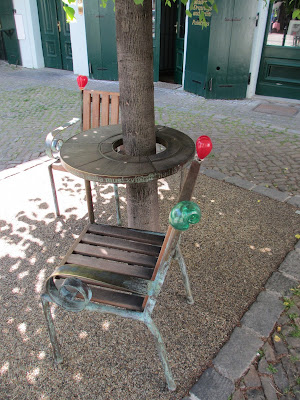 In Kutna Hora, we saw a cathedral with a very unusual 'tent' roof, went down a silver mine, and emerged subdued from the eerily strange Sedlec Ossuary, or bone church. Over the years, Kutna Hora has attracted many poets, writers and artists because of its spooky, romantic atmosphere, and it now has a poetry festival in September. The poet-author of the Czech national anthem was born in this town. Here's a photo of the cathedral: 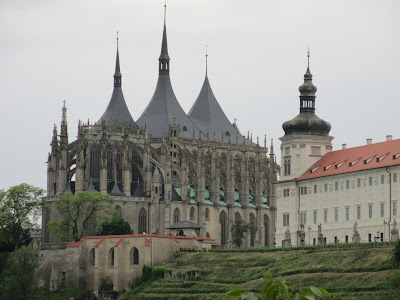 Plzeň was a real working town with a very interesting depth of history. I was pretty much forced to drink beer there, because of the Pilsner brewery, in whose icy depths we spent some time. We also saw this remarkable mural featuring many famous figures associated with the town's history. In this detail, the young man on the left in the cape is Josef Kajetan Tyl, who lived in the first half of the 19th century. He was another playwright who was also a poet. (Rather wonderfully, it often seems in the Czech Republic as though everyone is also a poet.) Rainer Maria Rilke apparently acknowledged Tyl's influence. 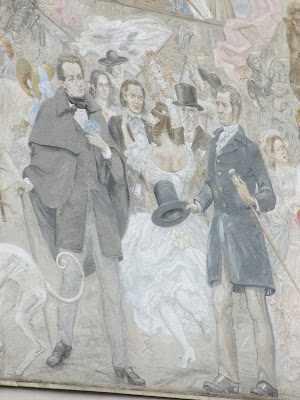 In Plzeň I was also very happy to see this set of characters in the wonderful Puppet Museum (puppetry is very important to the culture of Bohemia.) They were for a Hound of the Baskervilles puppet show, and yes, that's Holmes and Watson at the top! 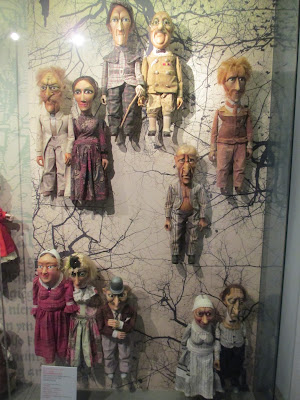 With thanks to Czech Tourism

Posted by Clarissa Aykroyd at 23:26 No comments:

Sherlock Holmes, from The Naval Treaty, by Sidney Paget


The Pakistan-based literary and arts journal/website The Missing Slate, who have previously published my work, have just published my poem 'Sherlock Holmes in Red Cross Garden' .

This poem is, of course, one of the four that I wrote for my recent residency with Red Cross Garden, organised by the Poetry School and the London Open Garden Squares Weekend. It was the first poem that I wrote, since Holmes walked into the garden in a very definite way not long after I first visited it and started reading and thinking about it.

I would call this quite a personal poem, though it's hard to explain how exactly. Sherlock Holmes has accompanied me for so much of my life (since I was seven years old, I think) that he has become a part of me in a way I wouldn't say any other fictional character has (and where Holmes is, there Watson is as well, usually). He's led me down so many literary, figurative and real pathways that whenever he shows up, he remains both familiar and fascinating - and also, a kind of mirror for myself.

When I had written the poem I realised that there was an undertone of anxiety in it which surprised me a little. This is not a Holmes in the best frame of mind, I think. He may be preoccupied with the details of an unspecified case, but Watson isn't wrong when he suspects Holmes's preoccupation goes beyond that. I think he is awaiting a confrontation, to come sooner or later, and he is looking for solace amongst the flowers. "What a lovely thing a rose is" is directly from the story The Naval Treaty, in which Holmes speaks unexpectedly and passionately about the beauty and significance of flowers. It is also a passage which indicates that Holmes was no atheist, which in modern times he is often popularly supposed to be. "There is nothing in which deduction is so necessary as in religion," he says. "Our highest assurance of the goodness of Providence seems to me to rest in the flowers."

Posted by Clarissa Aykroyd at 22:26 2 comments: 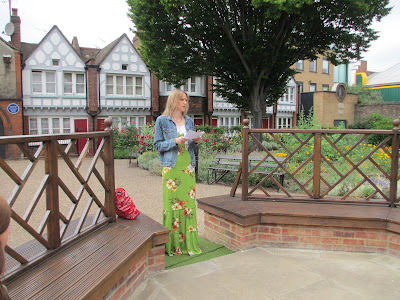 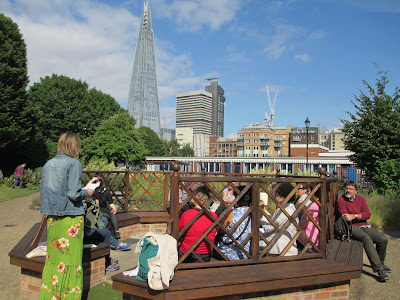 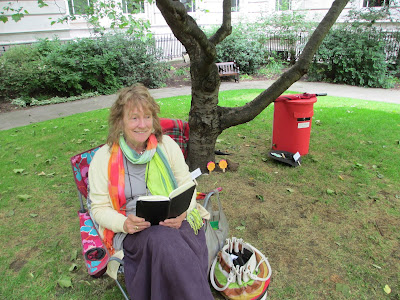 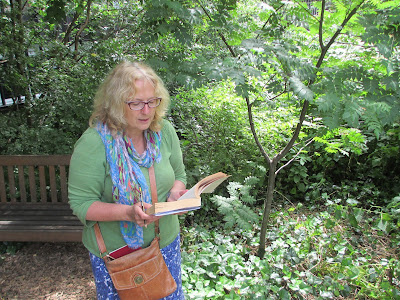 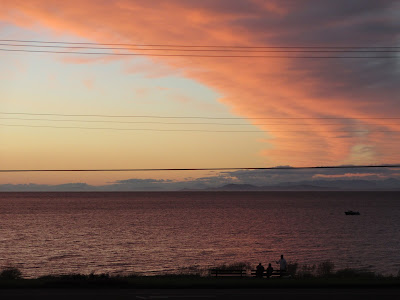 
Shot Glass Journal, who have published some of my short poems in previous issues, have just published my poem 'Qualicum Beach' in their latest issue.

I wrote this poem last year after visiting Vancouver Island's Qualicum Beach, a small town a few hours from where I grew up. Like much of the Island scenery, Qualicum Beach and the surrounding areas are stunningly beautiful. And the ocean does indeed bring a very special type of solace.

Posted by Clarissa Aykroyd at 20:16 6 comments:

Email ThisBlogThis!Share to TwitterShare to FacebookShare to Pinterest
Labels: Canada, my own poems, Shot Glass Journal 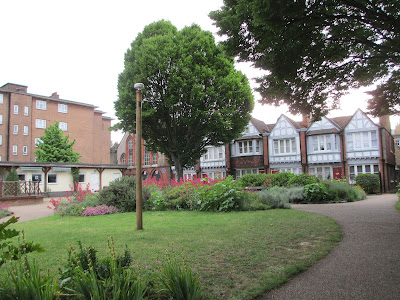 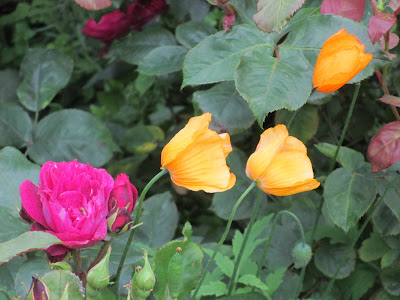 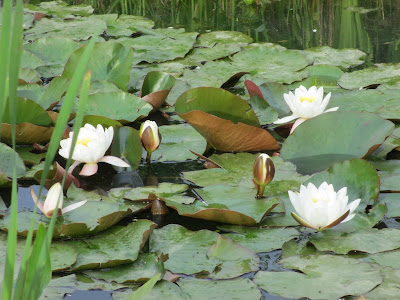 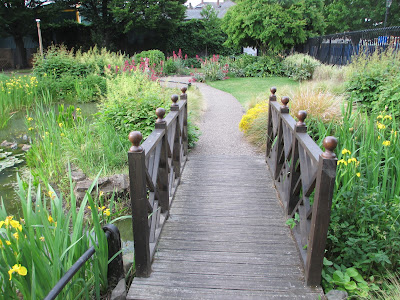 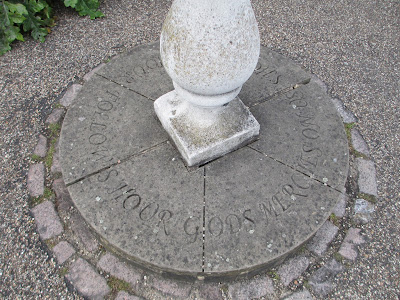 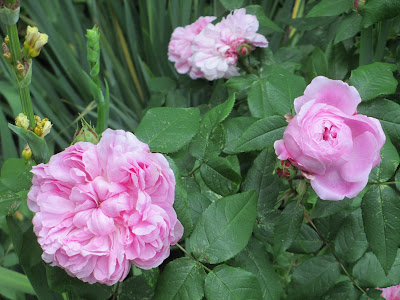 Posted by Clarissa Aykroyd at 18:24 No comments:

Email ThisBlogThis!Share to TwitterShare to FacebookShare to Pinterest
Labels: gardens, London, London Open Garden Squares Weekend, Mixed Borders, my own poems, Poetry School, Red Cross Garden
Newer Posts Older Posts Home
Subscribe to: Posts (Atom)
"The Stone and the Star simply IS poetry" (Anthony Wilson)
"The Stone and the Star constantly surprises with new discoveries and reminders of old favourites... Fast becoming a stalwart of the UK poetry blogging scene" (Matthew Stewart, Rogue Strands)
"Clarissa Aykroyd is doing an important thing: a poet writing about poetry, and with a spirit of awed enthusiasm" (Tim Buck, Spectral Lyre)
"Your life, with its immensity and fear,
...now bounded, now immeasurable,
it is alternately stone in you and star."
(from 'Evening', Rainer Maria Rilke,
translated by Stephen Mitchell)