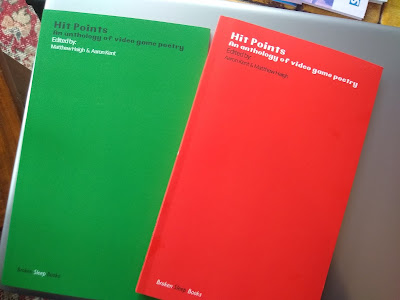 Another month has slipped away; not the best one, but as Rilke wrote, no feeling is final. Neither are a lot of things, for good and for bad.
A very good thing that happened on the last day of May was the publication by Broken Sleep Books of Hit Points: An anthology of video game poetry. I have noticed in recent years that poets of my generation (ok, let's say poets aged 25-50, which is probably a couple of generations) are increasingly acknowledging the inspiration that they draw from video games, and this anthology was designed with that in mind.
My poem which appears in the anthology is called 'Ultima IV: Quest of the Avatar' which, in a stunningly original move on my part, is also the title of the game which inspired it. The Ultima series of games, created by Richard Garriott (or Lord British...), dominated the nascent role-playing computer game scene of the 1980s, and Ultima IV is regarded as one of the most important role-playing games of all time. My brother and I played a few of the games on our Apple IIc, but we spent a particularly large amount of time on IV, and still managed to never finish it. There are probably a few reasons for this, but one of these is that we just didn't have the patience for the boring stuff, ie. dungeons. I realised even then that what I really loved was the world it allowed us to escape into, and the time spent with my brother. The poem, when I'd written it, turned out to be more of a homesickness piece than anything else.
Ultima IV came out in 1985, and many of the games honoured in the anthology are a good deal more recent, but there's something for everyone: various incarnations of Mario, Tomb Raider, Legend of Zelda, and others which as a non-millenial I have barely even heard of. The good news is that you don't have to know the games to enjoy the poems, though it would probably add to your appreciation. The anthology appears in "Mario Red" and "Luigi Green" variants. Both were co-edited by Aaron Kent and Matthew Haigh, but they chose a different running order for each version. Each editor also contributed a few poems to one version each.
You can buy the anthology here: https://www.brokensleepbooks.com/product-page/hit-points-an-anthology-of-video-game-poetry
Posted by Clarissa Aykroyd at 21:18 No comments:

Email ThisBlogThis!Share to TwitterShare to FacebookShare to Pinterest
Labels: Aaron Kent, Broken Sleep Books, Hit Points, Matthew Haigh, video games
Newer Posts Older Posts Home
Subscribe to: Posts (Atom)
"The Stone and the Star simply IS poetry" (Anthony Wilson)
"The Stone and the Star constantly surprises with new discoveries and reminders of old favourites... Fast becoming a stalwart of the UK poetry blogging scene" (Matthew Stewart, Rogue Strands)
"Clarissa Aykroyd is doing an important thing: a poet writing about poetry, and with a spirit of awed enthusiasm" (Tim Buck, Spectral Lyre)
"Your life, with its immensity and fear,
...now bounded, now immeasurable,
it is alternately stone in you and star."
(from 'Evening', Rainer Maria Rilke,
translated by Stephen Mitchell)